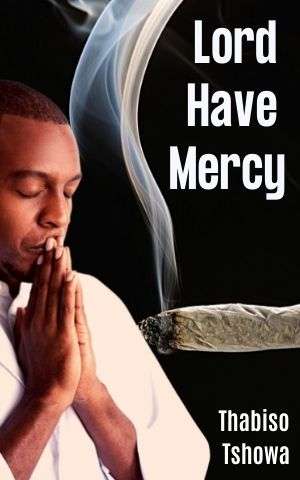 S’bonelo was already waiting for me at the school gate, so we could smoke a couple of joints before heading home. S’bonelo was a bit of a roughneck who hardly adhered to the school’s dress code. He always wore a T-shirt instead of a white shirt like the rest of us and he hardly combed his hair and always wore black and white All-Stars, but he was ‘good people’. We’ve been friends since I arrived at Ikhethelo secondary school, after he stood up for me when I got in a fight with a couple of older boys. It also helped that our homes were no more than 400 metres from each other.

I didn’t want to go smoking today, I felt I needed to go somewhere quiet to think things over. As we walked to our usual smoking spot at the end of the football field, I came up with a brilliant idea to excuse myself without having to explain why. “Eish boy,” I said as I grabbed hold of my stomach.

I stopped walking and turned to him with a sour face., “I think it’s diarrhoea, I need to use the toilet right away. Sorry, I’ll catch up with you guys in our neighbourhood.”

I walked away hastily, with my left hand on my stomach and my right hand covering my butt to give the impression that I really needed to go. As soon as I was out of sight, I headed straight for the library – I’d be able to think and work there. I had heard Mrs Masemola’s warning and I was not about to let Gogo down again.

I went into the library and sat down in the study section. I opened my maths book but soon got stuck on a difficult exercise. I looked around and saw a familiar face at a table close by. It was the new girl in class. She was fairly dark-skinned like me, petite in stature, and she wore her hair in a ponytail. She was reading the prescribed anthology for literature, Cut-glass Bottles – I could tell from the cover of the book.

“Psst, hello, ek’se, psst!” I whispered, trying to get her attention.

She turned to me and smiled. “Hey Thulasizwe, can I help you?” she asked.

I was surprised that she already knew my name and embarrassed that I didn’t know hers yet. But when you’re always in trouble, like me, everyone knows your name.

Feeling a bit more confident, I walked over and sat down at her table. “Hi,” I said.

When she realised I didn’t know her name, she grinned. “I’m Hope, Hope Mnisi. Why were you hollering when you simply could have joined me?” she said.

I felt myself blush. “Silly me, please pardon my manners, I didn’t want to impose, but I need your help. I’m stuck with today’s maths homework, not getting anywhere on my own, my mind’s all over the place. Do you think you can help? My future depends on it.”

Hope gave me a puzzled look. “What do you mean by that?” she asked.

I studied her carefully, then decided that she seemed trustworthy. “Mrs Masemola placed me on probation for the next three months and if I don’t get my grades up by at least ten per cent, and stick to the straight and narrow I’ll be expelled from school. All because of my stupidity and reckless behaviour,” I shook my head.

She rolled her eyes, “So you are a bad boy!” she exclaimed. But her eyes were kind and sympathetic, not judgemental.

I felt the need to confess everything to her because I suspected she might appreciate my honesty and agree to help me. I rubbed my chin. “Eish Hope, it’s like this, I was spotted having a night out with some of the young teachers from this school.”

Hope raised her eyebrows. “Sho, that would get you into trouble. How did it happen?”

I looked down at my textbook as I spoke because she had these beautiful, mesmerizing brown eyes that I felt I could get lost in if I looked into them too long. “It all began a few months back when I was on my way home to Ekuthuleni, after smoking a blunt with S’bonelo and some of the others. As I walked across the main road I was almost run over by a white BMW. The car stopped and the driver climbed out of the car. Honestly, I thought he was going to blame me and probably lay a hand on me but he didn’t.”

“Instead, he apologized. I was high on weed and it was night time, so I couldn’t see him clearly until he came closer. When he gave me that warm welcoming smile of his, I recognized him as Boniswa, the geography teacher. He had a glass in his left hand. I assumed it was water, until I took another look at the passengers in the car and realized that they all had drinks in their hands. That’s when I put two and two together,” I paused.

Hope gave me an encouraging smile, and I continued …

“Another car pulled up, a BMW similar to Boniswa’s make and model. It was Boniswa’s best buddy, Bhuti Vilakazi. Bhuti suggested I get in. He greeted me with a smile and a bottle of gin. ‘Awe boza, u grand?’ he asked, like he had known me for years. ‘Bamba, thela la! Sisayojika e shisanyama. Ngiyakena i boza eli grand njengawe vele liyaba gcwala nabantwana aba grand no gologo olu grand, nathi sithole ukuba grand,’ he said with the friendliest smile I’d ever seen in my life. He was so friendly that I felt I couldn’t refuse the invitation.”

“We went to so many places that night. I remember we were at Standerton Road, parked by the side of the road to take a leak when the power went off. I was so in tune with myself that when I looked up ahead at our hood, Mrova, the stars shining and the moon howling, I said to myself, ‘Damn bro, my kasi lights up in the dark!’”

Hope smiled, “Beautiful story but tell me, didn’t you see anything wrong with the situation?” she asked.

“To be honest with you, no I didn’t,” I confessed.

She sighed and shook her head. After a moment’s thought, she nodded at me. “Okay then, Thulasizwe Dube, now I need you to focus. I hope you are not planning on doing that again because you and I are making a pact. We will meet here everyday after school and study together, deal?”

We studied together until five o’ clock, then went our separate ways. When I got to Ekuthuleni, I found S’bonelo and the gents smoking a blunt at the Ethiopian shop. I joined them because, unlike alcohol, marijuana calmed my mind and helped me relax, while still allowing me to think straight.

I told S’bonelo about studying with Hope. He turned to me, “Mxm owo! You think I’m a fool. I know you’re in it for the girl, you don’t care about your studies, I know you, you’re my buddy,” he said.

I got pissed off and decided to head home. As I walked away S’bonelo chuckled. “We’ll see!” he called. “Twenty bucks you’ll go back to your old ways once you get the girl!”

< previousintronext >
Login to Comment
70 Responses
Thulasizwe will improve his marks after Hope helped him with his school work 😊
Intombi YomZulu · a week ago
I think Hope is a good girl and she will be Thula siswe's girlfriend soon
Natasha Ndovu · a month ago
I think Hope is a good girl and friend who is going to help Thulasizwe get out of the situation that he is in and make him a better person
Matladi Nkadimeng · a month ago
Hope will end up dating with Thulasizwe because she like the fact that Thulasizwe was being honest to her and she will proceed with helping Thulasizwe with school work so that he can be able to improve his marks and make his principal Mrs Masemola to be proud
Conscience · a month ago
She's genial and a good listener ❤ . They'll end up dating 😂.
Bokota · a month ago
Load More
Go to Library