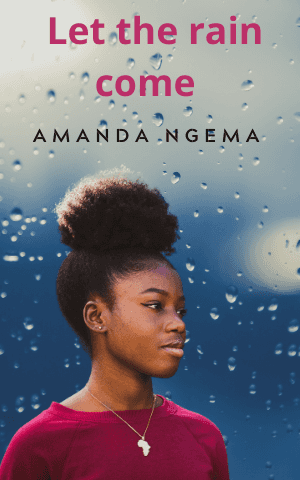 Zelwande is tapping at the the touchscreen of her cellphone.

The doctor confirmed. We are pregnant!!

She sends the message to Thobani.

A white Toyota Corolla Uber pulls up to her. She gets in. Her attention is on her cellphone as she types messages about the good news to Mrs Khumalo, Snothile and Senzo. She waits for their replies – unaware that the man driving the Uber is not the same guy who usually takes her on short trips around Hilary.

The car stops suddenly. Zelwande is still typing, sending more messages to MaNgcongo and former high school friends. The driver opens her door. Zelwande looks up to see what is going on. She sees the cloth in the driver’s hand rushing to her face. She breathes in once and the smell knocks her unconscious.

Thobani is getting anxious. He has been calling and sending messages to Zelwande but she has not replied. He leaves work early because the anxiety proves too much to bear.

He notices the big envelope taped to the gate as he pulls up at his house in Hilary. The envelope is addressed to him. The tears it open and reads the typed letter inside.

If you are reading this letter it means I am gone. I have never loved you, Thobani. I can’t go ahead with marrying you because even the child I’m carrying is not yours. Don’t look for me. I am gone and I’ll never come back. Place my brother and sister at an orphanage. Tell them I’m sorry, but I can’t stand to take care of them anymore. I need to live my own life.

I hope you find someone who really loves you.

Thobani runs into the house. He is in shock when he finds Zelwande’s side of the walk-in closet empty. This can’t be true. This is not like Zelwande – she would never do anything like this. But she is gone.

Senzo and Aphile are alarmed by the emptiness in Thobani’s eyes when they arrive back from school.

“Your sister is gone. But we will find her,” he tells them.

Senzo has the letter out of his hands before he can stop him.

Senzo is weeping after reading the letter. “How can Zelwande do this to us? She promised to never abandon us! I just don’t believe it. Something bad has happened to Zelwande!”

The wailing in the house goes on for hours. They can’t believe Zelwande simply packed her bags and disappeared.

“I will find her,” Thobani assures them.

“It is better you take us back to Tin City. You have built a house for us in Tin City. We can stay there while I go around asking Zelwande’s friends about her whereabouts. Please, Thobani, I can’t stay here not doing anything to look for Zelwande,” Senzo pleads. “I want to look for her too. And I will look after Aphile. We will be safe.”

“Is that what you also want, Aphile?”

Senzo cleans the house in Tin City for hours after Thobani has dropped them off. He can hear Aphile sniffling in the bedroom. He goes and holds his sister close to his chest.

“Don’t worry Aphile. We have money. I’ll take care of you. I’ll never abandon you,” he says.

Aphile is sleeping soundly later that night. Senzo stands at the door and stares at the stars. He looks back inside the house: there is food, furniture and electricity. There is money inside his suitcase – money he stole from Thobani just in case something like this happened one day.

Right then he realises that money isn’t everything in this world. He would give up everything they have now to have Zelwande back with them again.

Thobani is a shell of a man without Zelwande. He reports her missing and he drives to his family home to confront his mother and Snothile. He asks them what they said to Zelwande that made her leave without a trace. Their answers knock the life out of his chest.

“That girl was only after your money. As soon as she saw we were on to her she left you,” said Mrs Khumalo.

“She took you for a fool, Thobani,” said Snothile. “You are better off without her. Don’t forget the wedding anniversary!” Snothile calls after him, as he drives away.

Their parents 40th is only days away … and it is part of Snothile’s plan after all.

Tell us: Do you judge young Senzo for stealing the money?