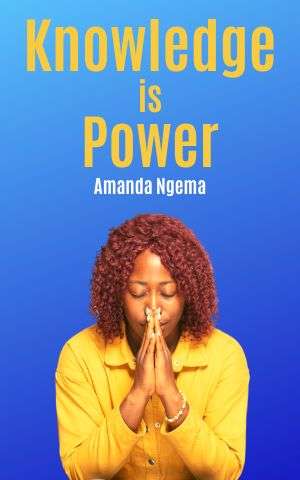 Nothando finds Nompilo sitting on her bed, counting a wad of cash, when she returns to the shack. Her boyfriend, a notorious whoonga drug dealer in Zidindini, has left.

Nothando doesn’t say a word. She takes her blanket from under the bed, wraps herself with it and sleeps on the sofa. It is cold in the shack. She wakes up to the sound of something pelting the tin roof. It is raining. Raindrops hit her in the middle of her forehead. She finds an enamel basin and places it on the spot where the raindrop is hitting. Raindrops hit with greater speed. She watches water getting higher in the basin.

The rain gets stronger. There is a tiny stream coming in from the iron panel that makes the wall next to the sofa. The rain peaks and suddenly stops. She lets out a sigh of relief. She hears Nompilo and Zama snoring in their rooms where they have bought new iron roof sheets.

Nothando drags her tired body to work the following morning. She trudges the five kilometres to her work place, her body tired from not getting enough sleep.

There is a mountain of plates and saucers she has to wash at work today because there is a big function. She gets to work, pushing all the tiredness aside. She is mechanical in her job today, working fast. She is there in body only and not in spirit. Her thoughts are on Xolani.  She still doesn’t believe that he hasn’t called yet. She is used to his tantrums and all this breaking up and making up.

Arguments are standard in their relationship. But in this last argument it seems his statement was final. Is Xolani really dumping me this time? she asks herself. Her heart breaks as she rinses dishes.

She knocks off and takes a slow walk to her home. She makes a sandwich and eats. She has just finished eating her sandwich when she hears a commotion outside. She goes out to check what is happening. One of the whoonga drug runners has been stabbed to death. He was stabbed by another runner because the one who has been killed was getting more customers. There are a lot of police officers around. Nothando’s aunt, Nompilo, is sweating and shaking with fear because her boyfriend has left a stash of whoonga with her.

“What if the police are coming with dogs? Linda left so many drugs with me. I’ll be in jail for a long time if they find his drugs on me,” Nompilo says as she runs out of the shack. Nothando watches her running and disappearing in the night.

The government undertakers take away the body of the dead dealer. Many young women wail: they are the girlfriends and baby mamas of the drug dealer.

When all the noise has died down, Nothando lays on the sofa and takes out her diary. She tries to write down her thoughts but what she has seen today has left her unable to write.

The sun is out in earnest the following day. Women have woken up early to do their washing. Clothes flail on washing lines in the hot air. Flies buzz in the heat. Nothando is also washing clothes in the large basin outside. She is not going to work today.

She finishes washing and cooks porridge. Maize meal is the only food she has. Zama and Nompilo enter as the porridge starts to boil. They have bought clothes and food. They fit their expensive new clothes. After prancing around in their new clothes they take out the food they have bought: a full cooked chicken, bread, chips and cool drink.

They don’t offer Nothando even a tiny piece of the chicken. They eat it all and even grind the bones with their teeth. She feels as if her heart is getting stabbed when she sees her aunts eating succulent chicken pieces while she takes spoonfuls of tasteless porridge. She wonders what she ever did to deserve such treatment from them.

Unlike most of the girls in Zidindini she never ran around with boys in her teenage years. She was an exemplary student. Nothando was on course to pass matric with flying colours until the sudden illness that stopped her progress. She was writing her first matric exam paper when she was attacked by inexplicable debilitating migraines. The headaches were so severe that she’d be bedridden for days at a time. Those headaches were the reason she didn’t finish writing her matric exams. The headaches stopped her progress in life.

“You can pour a glass of cool drink,” says Zama.

There is a smirk on Zama’s face as she stares at Nothando eating bland porridge.

“Here are two slices of bread that are left over,” says Nompilo, putting on another new dress.

She eats the bread and pours the cool drink. The glass is a quarter full when she hears Zama say, “I didn’t say I’m giving you all of the cool drink. Leave some for others!”

When her aunts have gone out in the afternoon Nothando takes out her poetry exercise book. She thinks of a poem. The only thoughts she has are of poverty and hunger. She hates that she has to write about sorrow all the time. She feels she is making poverty and sorrow her future if she writes about it all the time.

“No. Today I’m writing a poem about hope. I need hope in my life. Hope is what will drive me to a better life,” she says out loud in the empty shack.

She feels hope surging through her body as she motivates herself. She takes out her matric text books. She piles them on the sofa and just looks at them. She remembers the sleepless nights when she was studying for matric exams. She remembers the calming effect studying brought to her life. She is smiling, remembering those days, when she sees Xolani standing at the door.

Tell us: Do you have a creative activity that brings you hope? Is it writing, singing, or something else?

< previousintronext >
Login to Comment
38 Responses
Yes reading n writing
Michelle Maninjwa · 3 days ago
Yes i have is a singing asong
Kondwani Kandiero · 2 weeks ago
Yes I do. It is writing ✍️ and drawing.
Moyase Millicent Sithole · 2 weeks ago
I always think about better ways to BETTER MYSELF but haven't put nothing on paper I guess I should start Now
Bonnieh Chiliza · 2 weeks ago
I sing , singing calm me down and give me hope
Nhlanhla Phewa · 2 weeks ago
Load More
Go to Library