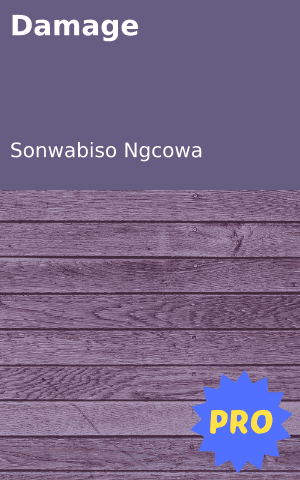 We had done the rounds: Mfundo’s home, Lwando’s home and our soccer captain, Phumlani’s home. Even the old man, Ludwe, who is always present at our soccer practice as our unofficial coach, didn’t escape our thieving hands. In the last year we stole a total of six sheep from Tat’uLudwe’s kraal. He is still searching for his missing sheep.

Different sangomas took turns to lie to him. One told him that a business man from Bholothwa, a nearby village, stole the sheep. One told him that a farmer from Gxoterha stole them. Those must be fake sangomas. We ate all those sheep. The skin, skulls and feet of all the sheep lie on the bottom of Ngwengwe River.

“Mpasele, pass to him! Pass the ball!” I hear the screams.

Mandisi makes the ball curve from the centre-line. I chest-trap it and let it bounce at my feet. I put my head up to look for orange bibs matching mine. Two boys, strong and skilful, are defending.

Shay’ ithembisa to the left. One runs to fetch like a dog while the ball stays at my feet. I shield the remaining defender with my body.

“Koshiyana oomam’ ukondla – it’s a battle of whose mother fed their son best!” I hear the voices scream. He is not giving me much space. He is closely guarding my right leg.

No more options! I kick the ball up with my left foot and boot it hard in the direction of the opposing side’s keeper. The black and white Adidas ball curves. Tat’uLudwe!

I nail my feet to the ground. Fear grips me. Goose skin takes over my whole body. Tat’uLudwe is leaning against his walking stick, right on the touchline. He always wants both his hands to be free so that he can wave them in the air. Then you know that he wants you to push forward. He is passionate about the game. But this time his arms remain folded. Why?

I freeze. Tat’uLudwe’s body twists. He falls face down on the hard soil. His walking stick digs a deep line in the dirt. My curve ball has gone straight for his stick.

The whole team runs to him. He leans heavily on Lwando as we help him up. As soon as he is on his feet we pull each other back.

“Sapha kwedini, give the ball to me,” Tat’uLudwe demands. He grabs Lwando with his left hand. With his right, he draws out an Okapi knife from the back pocket of his pants.

“Give him the fucking ball Lwando. Don’t you see he’s got a knife. Stupid man!” Phumlani, our captain, screams.

Phfffff, our ball goes pap as Tat’uLudwe slices a big hole in the leather. That was the last of our decent soccer balls. He must suspect something about us and those sheep.

“Tell your coach to come see me at my house,” Tat’uLudwe says, then turns and limps home. We strip off our soccer bibs and throw them in the club kit bag. Then we go our separate ways. Mfundo and Lwando accompany me home.

“Ntwana, we have not been to your kraal yet,” Lwando says.

“No, no, remember what I said. I told you, we only have a few sheep in my kraal… only seven mfowethu…” I blurt out. I can’t let them come to our kraal.

“That was last year mfethu. You have new little lambs now. It is not fair that we steal from every other home, including ours, and not yours.” I just look at Lwando when he says this.

When we reach my home I don’t say goodbye to them but just fling the gate open and walk inside our yard. I don’t look back.

“Were you with those naughty boys again?” my sister Nonyaniso wants to know, as I walk into the house.

“Voetsek! I don’t say anything about your friends or about that nerd of a boyfriend, Sihle.” I know I am being nasty but I can’t stop myself. Nonyaniso is always at me about something.

“Hmmm, let me see. He is handsome, has a good job, is well mannered. Oh ja, does not smoke dagga. Does that make him a nerd? No! So buzz off bhuti.”

“Ce…ag, handsome! You don’t know what handsome is.”

“I know he does not look like you or any of your friends. Mmmm, his hair is neatly cut, he has soft hands…”

“Shut up. Say one more word and I will hit you.” I can’t bear the sound of her voice, comparing me to the perfect Sihle.

“And you think I won’t hit you back? Ha! You must be mad bhuti!”

She stands, her hands on the hips of her slender body, challenging me. Some of her hair has come loose from the band she has tied it back with, but she doesn’t bother to push it back from her forehead. Her eyes are focused on mine.

“Qalisa ngoku, go on – start now if you are going to hit me,” she says, taking a step towards me.

“You think you can fight me only because you know Mama will take your side. She always does. It makes me sick.” It’s true my mother always takes Nonyaniso’s side.

“Ooh, ag shame, wena. I wish you could be a gentleman. The brother I used to know. You have changed. Look at you, getting ready to hit a girl. Shame on you, Sabelo.”

“Shut up, I have more important things to think about.” I push past her to my room and slam the door shut.

Mama has been making me wait for months for a pair of new shoes, but she keeps buying Nonyaniso new clothes. It isn’t fair.

Then I remember Lwando’s words. I have to find a way to stop the Black Tights – as we call our small gang – from hitting my kraal tonight.

< previousintronext >
Login to Comment
86 Responses
peer pressure changed him
thabi omuhle · a year ago
PeErs & their pressure
andiseawear Q · 5 years ago
Wel i thnk he hs bn changed by his gang friendz bcz he usd to be a vry gud wel mannerd boy
precious · 7 years ago
his friends and maybe family changed him...i think he was a good boy bt now he is rude,steals and has a gang
MISS+REGGAE · 8 years ago
He used to be a handsome boy but now he is involved in a gang & he is smoking dagga
Masego+zeebo-touch47555fff · 8 years ago
Load More
Go to Library