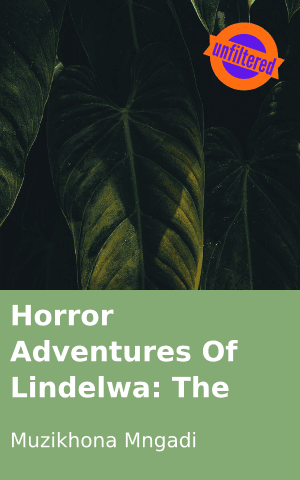 Author
Muzikhona Mngadi
Publisher
FunDza Literacy Trust
Language
English
Licence
All Rights Reserved.
Length
Medium
Topics
Fantasy / Supernatural
Login to Like.
4
Chapter 5
The next day, Lindelwa walked with a dog. It sniffed everywhere and leaving it urine. It belonged to her neighbour, but it was hers as much as it was theirs.
She’d create a bond with the dog because of all the food leftovers. She’d dish for it. She’d given the dog a name because of the love she had developed for it.
Mickey.
Mickey was only three years old. White with brown massive spot on her head and at the end of his back to his tail. Mickey always followed, Lindelwa if he sees her leaving, but sometimes she’d chase him back home.
At times for him tagging along would put, Lindiwe in trouble with other dogs. Chasing them way when they gang up on him, only to find herself being threatened too.
Lindelwa passed four blocks to finally reach at her friend’s house.
They’d been friends since they were ten, in a group of five, including, Samkelo Luthuli, although he was scarce after his mother’s death. The other two she’d grown apart from them, sticking to the only one that never changed.
Lindelwa saw his mother sweeping the yard with small branches that had dry leafs. She greeted her with a smile.
“You need to warn this friend of yours to stop talking back to me when I tell him to do something. Dishes are unwashed, waiting for him but his busy with that damn cellphone” said his mother, angrily.
His mother was always upset. Lindelwa knew her always upset. The only times she’d seen her in a good mood was when she’s tipsy or drunk. The sober mood made her grim and angry, shouting all the time.
“Melokuhle! Awuphume lapho. Lindelwa is here to see you” she shouted with her high and squeaky voice.
A boy at, Lindelwa’s age, early twenties, came out in the outside room with his thin and perfect eyebrows frowned resentfully at his mother constantly shouting.
Lindelwa chuckled softly as she knew he will never get use of his mother unnecessary yelling.
“When you done here get on those dishes. Your little sister will be coming back from school soon, and I won’t serve her food on dirty dishes” his mother told him and walked away.
Melokuhle ignored his mother and smiled at his friend.
“What are you doing here? You never visit during the week” said Melokuhle.
Lindelwa got straight to the point about her unexpected visit. She filled him about what happened last night. Thembi Luthuli’s ghost showing up in her room, needing her help.
“What?” Melokuhle released a husky, childlike laughter. “You must’ve had a terrible nightmare to believe all that nonsense.”
Of course he was going to find it funny, and certainly find it hard to believe it too. Lindelwa felt the woman’s frustration on the novel when no one was believed about her dead baby haunting her.
The disappointment was utter and most cruel in Lindelwa because she needed her friend’s help.
“Melokuhle. I need you to accompany me to go and see, Samkelo. His mother is not happy about him beating up woman” Lindelwa said with desparate voice.
“Maybe you should start writing your own horror novel. This scary shit you’re making up is pretty good” said Melokuhle.
Lindelwa grunted.
“Look, you know I can help you with anything” he added. “But this….if it true…”
“It is true”
“Then you’re on your own. I’m sure you understand when it comes to anything scary my legs always shake. Besides, you heard my mother. I’ve got some chores to do” he said.
And that was it. He was abandoning Lindelwa with evil hanging on her shoulder. It was okay, she understood him. A situation like this was difficult to believe, and for a person who hates horror was certainly wasn’t going to get himself involved in this nightmare of hers.
< previousintronext >
Login to Comment
4 Responses
Ok scary facing it alone
Hlengiwe Ndzimbomvu · yesterday
Lindelwa must face this,alone
Feziwe Nzima · 2 days ago
Okay
Lindy Theledi · 3 days ago
Just drag him to your house and ask the bone chilling woman to come out.
Emihle Tshem · 3 days ago
Go to Library