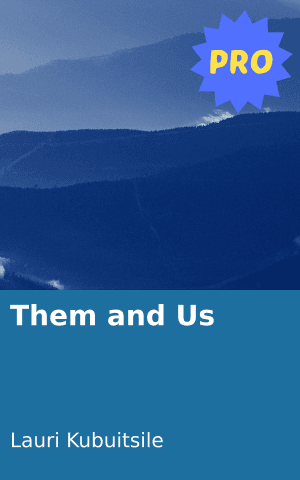 My brother Masego was already nineteen years old by the time my father lost the job at the furniture factory. Masego hadn’t finished school. Not because he was stupid, but because at fifteen he got a job selling fruit for Mr Williams. Mr Williams had a big business that sold fruit to the entire area. It was a job; it was money that we needed at home, so Masego left school.

Mr Williams liked him and took Masego to truck driving school, so soon Masego was promoted to driving the truck that delivered fruit to all of the fruit stands around Nokeng. That kind of driver’s license is difficult to get and very expensive to train for, so Mr Williams really helped Masego by paying for that training. And the promotion meant a much higher wage. It was a good job, but you wouldn’t know it from the way Masego acted.

My father and I are not like that. We’re OK where we are, if we’re happy. But not my mother and Masego. They can’t even see that they’re happy where they are because they’re stretching their neck to see what is on the other side, to see what is too far for them to reach. Then they need to be unhappy about not quite getting it – when if they would just sit a minute they’d see they don’t even need it.

When Masego came home from work that day, the day my father lost his job, he made everything worse.

“What do you mean they let him go? They can’t do that!” he shouted when my mother told him. My father hadn’t returned home from when he left in the afternoon. I knew him. He was waiting until everything calmed down before he came home.

My mother stood at the stove stirring the pap. “That’s what he said. But they kept those Zimbabweans. Can you imagine? See – that’s how it is now. A hardworking South African must stand aside to make way for Zimbabweans. It’s not right. It’s just not right.”

I could see Masego was getting angrier due to my mother’s comments; it was like she was putting paraffin on a fire. I didn’t like that she wasn’t making things clear. She wasn’t explaining things the way they should be explained. It wasn’t like how she was saying it, she was just trying to get Masego to be on her side, for him to be angry like her. She wasn’t explaining it the right way.

“But Papa said those guys are experts. They can’t fire them or no-one will be there to make the furniture. They need to save money and they needed to get rid of the untrained people like Papa.”

My mother turned to me, her eyes flaring with anger. “Why are you sitting around listening to grown-up conversations? Get yourself outside and sweep the yard.”

I picked up the broom and went outside. I knew she didn’t care about me sweeping, she just didn’t like me going against her. But I didn’t like the way that my mother and Masego were talking. It was bad enough my father lost his job, but they were turning it into something else. Something it wasn’t.

I put the broom down next to the house and walked down the road to where I suspected my father might be. A bit of the way down the road was MmaShorty’s place. MmaShorty had a shebeen at the back of her house. I followed the well-worn path to the back of the compound and found my father sitting on an upturned brick in the cool shade of a wide tree. He was all alone to the side, away from the others, drinking a carton of Chibuku. He was looking down at the ground and I could tell he was feeling bad about everything. I went over to him.

“Hey Papa,” I said, sitting on the ground next to him. “Sorry about your job.”

“Yes … well, things happen. We’ll get by. Something always comes along.” He smiled weakly at me. “Do you think I can go home now?”

“I wouldn’t if I was you. She’s still pretty upset about it all. Let’s sit here for a while. I’ll stay with you,” I said. I didn’t tell him I was not welcome at home either. He didn’t need more bad news. I knew that eventually Masego would go out and my mother would go to bed, then my father and I could sneak back home, but I’d keep him company until we could.

“Do you know the capitals of the African countries?” I asked him.

My father smiled. “OK. Let’s see … what about Liberia?”

It all sort of starts like that. Bad luck, a thing gone wrong. No-one’s to blame but still you go looking. Looking for someone, anyone, to carry the weight, anyone to mark as the problem. It can’t have just happened. It’s them, you say. Them, they caused the problems. Them, they’re always stirring up trouble, making things worse for us.

They’re nothing like us. Them. They don’t care about anything except themselves. They want to ruin everything for us, that’s all they want. Them with all of their odd, scary ways. Them who talk different, eat different food, behave strangely. Them that don’t belong here, don’t belong there.

Us. Us – we need to do something or we’ll lose everything to them. Us, we’re the right ones. The good ones. We do things the right way.