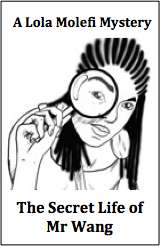 That night I couldn’t sleep. I kept thinking about all of the terrible things that might have happened to Mr Wang. Who was that breathing person on the phone? Was it him trying to let me know he needed help? Was it the kidnapper having second thoughts? What was in that package? Was it diamonds? Drugs? Gold? What would a person be able to kill for?

I eventually fell asleep but woke up too early. I sat in the sitting room looking through the window and watching the sun come up over the horizon. My mother woke up and found me there.

“Yes. Too many things to think about.”

“I’m sure Mr Wang is fine, Lola. You like looking for problems where there are none. It’s your inquisitive mind.”

I watched the sun as the whole round circle of it came over the horizon. It was time to start the day, and what a day it would turn out to be.

When I got to the store, at first I thought it had been broken into. The door was open and the blinds were up. I looked inside – and there was Mr Wang!

I burst through the door. “You’re back! You’re OK!”

“I struggle with the letters. I was taught Chinese characters in school. It’s easier to type. But why does that matter? Lola, I told you not to let your investigative mind run wild.”

He bent down to take Chairman Meow out of the carrier. The cat purred and curled up in his arms. Mr Wang looked at me.

“What did you do to Chairman Meow?”

Mr Wang carried the cat to the office. I moved around the shop preparing things for the new day. Then I heard something. Mr Wang was whistling! Mr Wang never whistled!

Jomo and Bonang came through the door and once they were inside they stopped too.

“Yes. He might be back, at least a version of him, but things are still not right. We must start surveillance tonight. Are you both in?”

They looked at each other then at me, and nodded their heads in unison. Then just behind them I saw Sergeant Seabe coming through the door, on time as promised.

“So, Lola, I’m here for the kidnapping case.”

Mr Wang came out of his office just at that moment. “Kidnapping? Who’s been kidnapped?”

I grabbed Sergeant Seabe’s arm and led him outside, closing the door behind me. “As you can see, Mr Wang is back. Everything is fine.”

Sergeant Seabe smiled. “Didn’t I tell you, Lola? Your creative mind is just too much for this line of work. Maybe you should think about being a writer. Yes, making up stories is the line of work for you. In most cases, things are exactly as they seem. Just as boring as they seem.”

I walked him toward his car. “Yes, Sergeant Seabe, I do believe you are exactly right. Thanks for coming by anyway.”

I watched him drive away. Once he was gone I started planning the surveillance for the night. Something was up and I was going to get to the bottom of it one way or another.

“Goodnight! See you in the morning,” I said to my parents, who were watching a movie on TV.

Amogelang and I went into our room, closed the door behind us, and got to work. We were not new to the surveillance game. We put on our black pants, black T-shirts, and black jackets. I checked my backpack: torch, rope, notebook, and binoculars. Amogelang checked her backpack; I didn’t ask what was inside.

I indicated the window and slowly opened it, being careful of the place it liked to rub and make a screeching noise. Amogelang climbed out, I climbed out after her. I closed the window carefully, making sure to stick a rolled-up leaf in the edge so it didn’t accidentally close all the way. Then we ran across the garden, jumped the fence, and headed for Mr Wang’s house.

When we arrived, we found a very excited Bonang and Jomo waiting for us.

“A car just arrived. A big, older, Afrikaner man got out and he went into the house three minutes ago,” Jomo said, confirming the time on his watch.

“We know nothing yet,” I warned her.

Just then we ducked behind the hedge because the Afrikaner man came out of the house followed by Mr Wang. No-one spoke. They walked silently to the black bakkie parked outside the house.

I turned to Jomo. “Did you bring your car?”

“Yes, it’s parked on the back street.”

We all darted for the car. Jomo managed to get around the corner just in time to see the black bakkie turning into the road out of town.

“I bet they’re going to the farm. It must be their meeting place,” Jomo said.

He was right. After leaving town, they turned down a long driveway. Jomo drove past it as I instructed and parked in the bushes along the main road. We got out quickly and rushed down the driveway. Luckily there was no moon and our black clothes helped us disappear into the night.

By the time we got to the house the man and Mr Wang had already disappeared inside. We crouched at the side. I motioned that we should move to the front, but just as we made to move the big Afrikaner man was suddenly behind us.

“Stand!” he ordered. I turned and saw he had a long rifle pointed at us. “So you’ve been following me neh?”

We stood up, our hands above our heads. He led us to a shed at the back. “Get inside! I’m busy now, but I’ll deal with you later!”

We went inside and heard the lock click shut. We were caught and we were in trouble.

Tell us what you think: What is going to happen to the group?

< previousintronext >
Login to Comment
40 Responses
the bones have spoken trouble is up here and nothing else ....neh! hahahahaha
Siyabonga · 4 years ago
Big problem is coming i guess
Kluv · 5 years ago
thy gona lose their jobs
RISSIEPIT · 5 years ago
Myb amogelang can hav a plan
ff1234..P-)thandieP-)(H) · 5 years ago
Myb th man will tell mr wang nd i dnt think mr wang will help em myb bcoz he's selling drugs something thts illegal yeah sumthin lyk tht
400404*.velebamthande.-* · 5 years ago
Load More
Go to Library