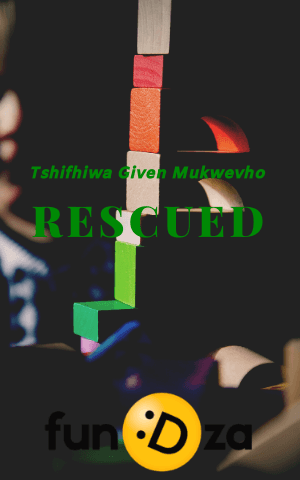 Lutendo is a handsome boy of nine, neat and clean at all times. But his mother has kept him out of school. She worries about him all the time. She has taught him to read, but he misses being like all the other children in the village: going to school, playing sport, swimming in the dam.

He has learned to hold a spoon between his stumps and so to feed himself, but he hasn’t learned to write. That’s because his mother has not thought it possible.

From the beginning Lutendo has wanted to be independent. Even when he was little he shook his head when his mother wanted to bathe him. Now, at nine, he tells her, “I am a man, Mma.”

She smiles and tells him that even a forty-year-old man is still a child to his mother.

“Haven’t you heard your grandma call your daddy?” she tells him. “My child! James! Come here, my child,” she mimics his granny’s voice.

When she does this Lutendo smiles because he can remember his Granma saying exactly that when she visited. She also loved Lutendo and he, too, loved her. She told him fairy tales about the half goats half humans that lived in the valleys of the Great Mapungubwe many centuries ago.

In the afternoon his mother lets him play with the children in their street, but she warns him sternly to always come home when the children decide to go and play soccer, or go to swim in the Mayayada Dam.

Lutendo though, longs to go to the dam and listens longingly to the boys talking about the muddy brown water, and boasting about who can dive off the highest rocks. They come back singing songs and he feels alone and excluded.

One morning he is playing outdoors with his male friends, Ndiafhi and Lawrence, and a girl from the neighbouring house, Precious. They are drawing things in the gravel. His mother doesn’t know it, but Lutendo has been practising drawing, holding a stick between his toes and scratching with it in the sand on the road.

“Here is an apple,” announces Lutendo, who has drawn a circle and a leaf in the gravel. They all agree that it is an apple. After some time, Ndiafhi announces his drawing.

“Here, I drew a tortoise!” he shouts.

“That’s not one,” Lawrence responds.

“What’s it then?” asks Precious.

“I am not sure, but it’s not a tortoise,” Lawrence answers. “Rub it out and I’ll show you what a tortoise looks like.”

“Yes, Lawrence, just do it so he can see,” Lutendo joins in.

Precious bursts out laughing and so does Lutendo.

“What is little Lutendo laughing at?” asks Ndiafhi, feeling humiliated by his drawing. “He’s a little boy and not men like the two of us,” he points at Lawrence then at himself. “I am at school that’s how I know what a tortoise is. Lutendo doesn’t even go to school. He knows nothing!”

Precious laughs, and speaks: “What about you Lawrence – how do you know how to draw a tortoise?”

“I have seen it in our school picture books. I’ve also seen a lot of them at Mayayada Dam. When they see us they rush into the water.”

Ndiafhi jeers: “Those are not tortoises, they’re turtles. You see, tortoises live on land. And turtles live in water.”

“You know what,” says Lawrence, “let’s go down to Mayayada Dam and you can see for yourselves. You too, Lutendo.”

“No!” shouts Lutendo. “I can’t go anywhere near Mayayada. Mma forbids me.”

Precious shakes her head. “I am not going either,” she says.

The other two turn to look at Precious and Lutendo, and laugh. “So you are a girl, Lutendo?” quips Ndiafhi. “You are not man enough.”

Lutendo is trapped in indecision.

Precious looks at him. “What did your mother say, Lutendo? You want to disobey her to please these two?”

“I have said it many times that Lutendo is not a real man, and here now is proof,” Lawrence says.

“Which means he is a girl,” adds Ndiafhi.

Lutendo casts his face down.

“I am going home,” Precious announces. Her words further frustrate Lutendo. “Didn’t our mothers warn us about going anywhere far away?” With that, she turns round and starts walking back home.

Lutendo watches as the two boys walk away from him down the road, towards the soccer pitch and the dam. Then he starts limping after them, not wanting to be left behind.

“Wait for me! Please don’t leave me behind!” he calls to them.

“But you said your mother will be angry if you follow us,” Lawrence shouts back over his shoulder.

“I think we can still get home in time. Or are we going to spend the whole day at the dam?” Lutendo is catching up to them. “I’m coming with you.”

“Suit yourself,” says Ndiafhi. “But we aren’t going to slow down because of you.”

Near the soccer field they meet five older boys; one of them is carrying a soccer ball.

“Where are you going?” asks one of the older boys but Ndiafhi, Lawrence and Lutendo are reluctant to answer.

“Okay, so you are not going to answer, little boys,” says one of the bigger boys. “Should I pinch your ears so that you can hear better?”

“That won’t happen, Khathu!” protests Ndiafhi. “My dad will strangle you with his bare hands. After all, we are not little ones.”

The bigger boys just burst into laughter. “Your father is my uncle, remember; he’ll not do that to me,” Khathu says.

“He is not,” Ndiafhi protests. “You only wish he was.”

Khathu shrugs, “Whatever … we are going to play football.”

One of the older boys adds: “You are welcome to join us.”

Lawrence whispers something into Ndiafhi’s ear.

“We do, Robert! We are going to play football with you,” Ndiafhi says. Lutendo’s heart sinks but he nods and joins in.

Tell us: Is it a good idea for Lutendo to go with other boys to the soccer field? Do you think his mother is right to keep him away from school?

< previousintronext >
Login to Comment
6 Responses
If the other boys are good to him he might enjoy socializing with them, I think playing soccer is better than going to the dam.
Redd88 · 6 months ago
It's not but he kinda believe that he is a grown up now so let the boy play but there will be consequences for not hearing what his mother said. His mother is not right to keep him away from school because there are also schools where they allow children with many kinds of disabilities
Rainbow Hope · 10 months ago
soccer and limping oooooh my whatever 🙄 #carryonreading
trooper · 2 years ago
The boy wants to feel and act 'norMal' so let the boy be. Hiding the truth about the world while he is still young will not do hiM any good. Chances are high that Lutendo's Mother will die before hiM and he'll face the world on his own. Rather prepare hiM now
Mtibza eM · 3 years ago
Yes, it is a good idea. maybe he has a soccer talent. he must be given a chance. her mother should not keep him from school, buy she can take him to the school where children living with his similar condition are schooling
Polykie · 3 years ago
Load More
Go to Library