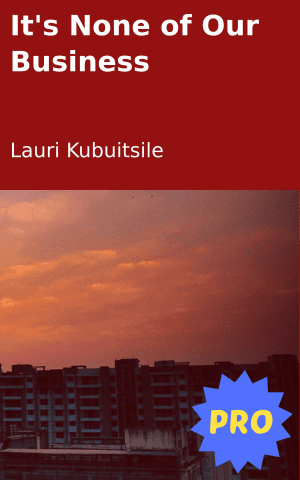 Tebogo waited in her blankets. She could hear the man and her mother but pretended she couldn’t. She tried to think about Monica’s house and her family but they seemed far, far away. Nothing as nice and good as the night she spent with them could exist in this terrible house.

She hid under her blankets and waited. After some time she heard them moving around. “I need to get to work,” the man said.

They walked to the door and after Tebogo heard him leave, she got up.

“Go back to sleep,” her mother ordered, heading for the bedroom.

“I need to tell you something.”

“No, it won’t. Your boyfriend touched me.”

“Touched you? What are you on about?”

Tebogo stood up now. She stood tall and straight. She would tell. “He reached under my nightgown and in my panties and touched me. He told me I mustn’t tell. But I’m telling.”

Tebogo wasn’t prepared for the hard slap. First one, and then another. “You’re a filthy child! A filthy liar!”

“I’m telling the truth.” Tebogo didn’t care anymore. Her mother could beat her, she could kill her if she wanted, it didn’t matter. It didn’t matter what happened to her anymore.

“No! Jocks is a good man, he would never do that. You must have told him to do it to you. I won’t have it! Jocks is moving in and I won’t have a filthy girl like you living here with us and messing up everything. Get out! Get out now!”

Tebogo grabbed what she could of her clothes, her school uniform, her books, and wrapped them in her blankets. Her mother grabbed a kitchen knife and was pacing back and forth like a mad person. “Get out! Get out of my house! Filthy, filthy girl!”

Tebogo wouldn’t wait for her to use the knife. She walked out of the door into the cool night. She heard the lock click behind her and the chain slide into place.

Tell us what you think: What will happen to Tebogo now? What would you do?