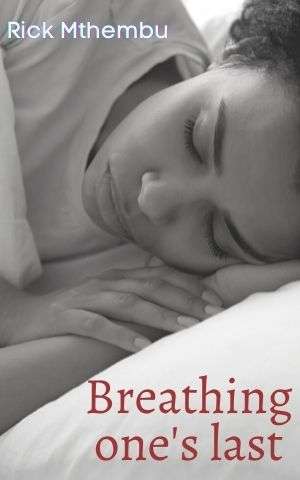 It is sweltering hot in the Durban city centre. Taxis blare music up and down the streets and hoot at passengers waiting on pavements. Sibusiso is in a hurry amid this bustle. He can’t wait to get to the office of the big contractor where he will attend a meeting in the hopes of getting a prospective job for his recently started painting company.

His cellphone buzzes in his pocket while he is waiting for the light to turn red at the robot. He recognises the phone number on the screen. It belongs to his sister, Thembi.

“My brother, I have to see you – please. It’s an emergency,” she says.

Her voice sounds different today; her breathing is laboured.

“I’ll come see you as soon as I finish with my meeting,” says Sibusiso.

Sibusiso can sense something is wrong. Thembi sounds fatigued. He calls her right back but Thembi can’t speak – her chest wheezes every time she tries to utter a word.  Sibusiso ditches the meeting and takes a taxi to Thembi’s shack in Inanda.

Arriving at her shack, Sibusiso is taken aback when he sees the frailty of Thembi’s body. She has grown skeletally thin; her beautiful thick black hair has gone – even the doek on her head cannot hide that she has lost all her hair.  Sibusiso helps her to the shade of the mango tree outside. They sit for a while, Thembi collecting her breath. Sibusiso looks at his sister with grave concern.

“It’s lung cancer, Sibusiso. The doctors said there is nothing more they can do,” Thembi suddenly says the words that shake Sibusiso up from his chair. Sibusiso is shocked and cannot believe that Thembi had kept this from him.

“Are you sure there’s nothing else that can be done, Thembi? Does Lungani know about all of this? About how sick you are?”

Thembi clears her throat. “He doesn’t have to know. If he cared…” She is interrupted by a terrible prolonged cough. She recollects herself and wears a stoic look as she continues. “If Lungani cared at all he wouldn’t have left me for another woman.”

“How long have you been like this? Why didn’t you tell me, Thembi? Are you sure there’s nothing else that can be done?” Sibusiso asks her again as he sits back in his chair.

Sibusiso hasn’t seen Thembi in two years. He has been working on construction sites all over the country.  He calls Thembi now and then when he remembers the days of their youth, but that has been seldom because he has been busy. Sibusiso looks at her and, especially now that lung cancer has ravaged her body, he sees only his younger sister, not the mother of two children that she has become.

Memories of their less than ideal childhood flood Sibusiso’s worried mind. Their father, John, drowned in alcohol, which made Sibusiso grow up quickly so that he could take care of himself and Thembi. John was so passionately in love with Maria, their mother, that when cervical cancer snatched her out of their lives he lost sight of everything else that was important in his life. He eventually took his own life. Sibusiso is deeply saddened that after surviving all the tribulations of their youth, Thembi now has to battle terminal lung cancer.

“I don’t have much time left. The doctor said…said that I…” Thembi shakes her head and weeps.

Sibusiso doesn’t say a word. He just reaches over to Thembi and hugs her.

“I wish everything was different, my brother. I wish Mother was here, and Father was here. I feel so weak and I don’t know if it’s the pills talking but…I wish I could just die now. I can’t bear the pain anymore. I can’t bear to see my children watching me fade away,” Thembi weeps on Sibusiso’s chest.

“No, don’t say that, Thembi. The kids need you. I need you,” Sibusiso can feel his sister’s frail body trembling in his arms.

“Sibusiso, I have no other choice. Death is near, I can feel it. I woke up this morning and I figured I should call you in case I’m not here tomorrow.”

“Please, Thembi, don’t say that. Keep fighting. You are the strongest person I know. I’m here for you. I’ll be here for you for as long as you need me,” says Sibusiso.

They just sit for a while in comfortable silence after they have both cried their eyes out. Thembi’s weak legs give out from under her when they go back into the shack for supper.

Ntombi comes running out of the shack. “Yes, Uncle Sibusiso.”

“Help me carry your mother inside.”

Tell us: Why do you think Thembi didn’t tell Sibusiso about her cancer?