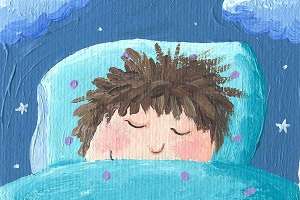 There he lay and thought and thought, till all at once he felt as though some one were gently sealing his mouth and eyes with a kiss. He slept and yet did not sleep, for he seemed to see the old washerwoman’s mild, kind eyes fixed upon him, and to hear her say: “It would be a shame, indeed, for you not to know your lesson to-morrow, little Tuk. You helped me; now I will help you, and our Lord will help us both.”

All at once the leaves of the book began to rustle under little Tuk’s head, and he heard something crawling about under his pillow.

“Cluck, cluck, cluck!” cried a hen, as she crept towards him. (She came from the town of Kjöge.) “I’m a Kjöge hen,” she said. And then she told him how many inhabitants the little town contained, and about the battle that had once been fought there, and how it was now hardly worth mentioning, there were so many greater things.

All in a moment he was on horseback, and on he went, gallop, gallop! Scratch, scratch! Kribbley crabbley! and now a great wooden bird jumped down upon the bed. It was the popinjay from the shooting ground at Præstö. He had reckoned the number of inhabitants in Præstö, and found that there were as many as he had nails in his body. He was a proud bird. “Thorwaldsen lived in one corner of Præstö, close by me. Am I not a pretty bird, a merry popinjay?”

And now little Tuk no longer lay in bed. All in a moment he was on horseback, and on he went, gallop, gallop! A splendid knight, with a bright helmet and waving plume,—a knight of the olden time,—held him on his own horse; and on they rode together, through the wood of the ancient city of Vordingborg, and it was once again a great and busy town. The high towers of the king’s castle rose against the sky, and bright lights were seen gleaming through the windows. Within were music and merrymaking. King Waldemar was leading out the noble ladies of his court to dance with him. 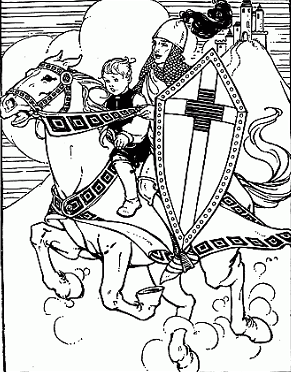 Suddenly the morning dawned, the lamps grew pale, the sun rose, the outlines of the buildings faded away, and at last one high tower alone remained to mark the spot where the royal castle had stood. The vast city had shrunk into a poor, mean-looking little town. The schoolboys, coming out of school with their geography-books under their arms, said, “Two thousand inhabitants”; but that was a mere boast, for the town had not nearly so many.

And little Tuk lay in his bed. He knew not whether he had been dreaming or not, but again there was some one close by his side.

< previousintronext >
Login to Comment
5 Responses
Hey by the way I kinda like the drawing
Miano · 2 weeks ago
👌
MPHIWA · a year ago
Young explorer maybe exploring about the nature or geography...😮😮😮😕mmhh
M.teey · 2 years ago
What a young explorer!
mahlatseighlekgoatheigh@gmail... · 4 years ago
Hmmm okay.......
Comfort Mchali · 4 years ago
Go to Library