An Angel in Everyone 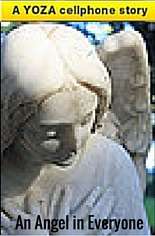 Angela has been hiding her bulging stomach from her mother for over six months, but that’s no longer possible. Her mother is suddenly faced with the truth that her 17-year old daughter Angela is no angel after all. For her it’s clear: Angela has broken her rules and must take responsibility for her actions. Her daughter must leave to live with Pisto, the young man whom Angela met only once, on that fateful day. A visit to the clinic reveals that there is a lot more that Angela will have to face up to. And she’s still so young. Is she up to the challenge? What about Pisto? And how can they live together when they barely know each other?

This story was adapted from the radio drama of the same name broadcast on Deutsche Welle’s Listening by Ear programme.