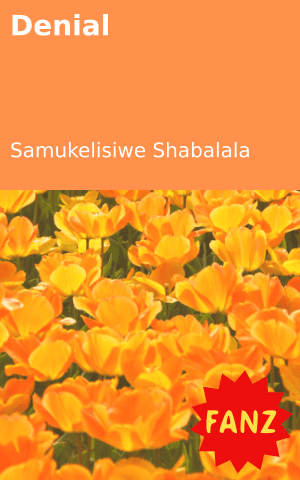 I get the sense that Lesego feels uncomfortable.

“I’m Thabiso,” he introduces himself, his car keys dangling from his left pinky finger.

Lesego nods in response and ignores the hand Thabiso has put out.

Thabiso rubs his palms together. He sits down. I watch my boyfriend as he acts all stupid in front of Lesego. I almost laugh. Almost.

“I need to do some groceries. Do you need anything?” Lesego stands up, clearly uncomfortable.

“Just some carrots and milk,” I say.

She nods and walks out.

“I can drive you there,” Thabiso offers.

“No thanks. I have a car.” Lesego walks out.

After the door is shut, Thabiso looks at me for the first time today.

I stand up, my weave lying dramatically on my shoulders as I do so. I’m wearing shorts and a vest.

He slips his hands in my shorts. “I missed you,” he says, his hands moving under my panties.

He sees that I want him. He starts kissing my neck, and we get intimate right there in my kitchen.

Lesego walks in at about half past five. Thabiso is long gone by then. She has all I have asked for and more.

She smiles, “Which lady doesn’t?” she asks.

“So, that was your boyfriend?” she continues.

I nod, embarrassed. There’s a look of disappointment in her eyes.

I hold her face up, “Did he make you uncomfortable?” I ask.

“Where are you going? I could cook and…” I say.

I have this sense of stopping her. I don’t know why.

She shakes her head. “Some other day,” she tells me.

Why do I want to stop her? Do I like her? I can’t be lesbian! I’m a girly girl, I like boys, hell, I even have a boyfriend, though he’s a jerk.

I finally reach her; I grab her hand.

She shakes her head. “Sleep good,” she tells me, and walks out.

Tell us: Why do you think Lesego reacts the way she does?

< previousintronext >
Login to Comment
7 Responses
I think she's bisexual cos she loves her and still sleep with a boy. By my knowledge of you are gay or lesbian you can't sleep with someone who is straight
Sasha b · 2 hours ago
She has feelings for Nonhle and when she saw she has a boyfriend, she was sad
Elena_75 · yesterday
She is in love with Nonhle, but she found out that she has a boyfriend
Malwandl · 2 months ago
She's in love with her , obviously
Joyzeee · 2 months ago
She's hurt that Nono has a boyfriend
Gemini88 · 3 months ago
Load More
Go to Library