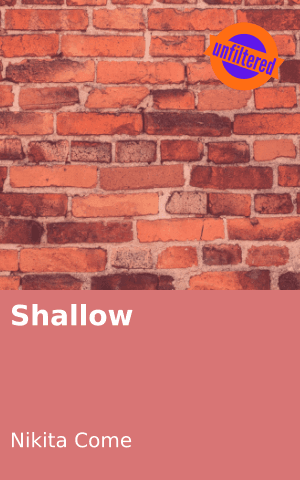 “If you get close, I’ll stab you! Stay back!” I roared at the man. He looked anxious and backed away telling me he never intended to hurt me but I didn’t believe him, I might’ve been naive and inexperienced but I wasn’t gullible.

“Let’s settle this on a shallow level, ok? look… let’s start by you giving me that dagger. I won’t hurt you–i promise.” He said, swallowing hard and nervously observing my every move.

“No! Back away!” I shouted, and the dagger was shaking because I was shaking. I’ve never felt this kind of fear before and I’ve seen people kill people in movies but I didn’t think I’d do it to anyone.

“Help me get out of here… Now! Make a plan… I don’t care what, just do it!” I said almost bursting in tears. It was all just awkward and scary. I was worried he’d throw something at me because the situation was like a thriller movie.He suddenly changed his facial expression and body posture.

He stood still and his face was stained with some sort of bravery of some kind. It’s like he had lost his fear or something. “If you want to kill me, kill me.” He said, in his now serious tone. “However, I was going to pay your mother after this. Now, how are you even going to survive without me? Do you know how poor your mother is? She’s lost everything and has decided to do anything to get this money.” He said in a smirk.

That made me sick. I knew he was trying to trick me but as I held the dagger at him I thought about it. Without this guy’s money, how would our lives be? I thought ahead about escaping and figured I have zero chances of that. Multiple questions ran through my mind, “should I kill him?” And, “Maybe I should take his money and run away, but where to?” “Does he even have the money? Damn, what should I do?”