The Scars in My Heart 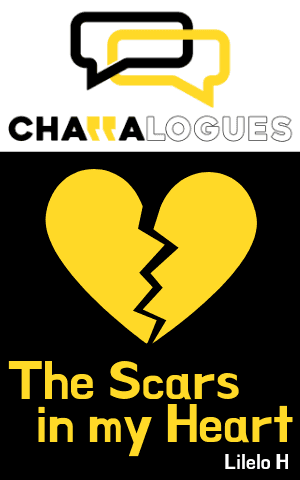 Noni wants to ask Mlungisi where they are going but the taxi is full and noisy and he is chatting to the driver. The taxi stops several times to drop people at their various stops.

Noni waits for Mlungisi to finish talking to the driver. Finally he signals that they have reached their destination. He takes her hand and pulls her out of the taxi. She looks at him waiting for some kind of explanation. His face has changed. It is different. He isn’t smiling any more. He says nothing. And at that moment she knows that she is in trouble.

She doesn’t know where she is. They are deep in the heart of an informal settlement. All the houses look the same. She wants to run. But where can she go? She is afraid but she decides to try to keep her cool.

NONI: (calmly) Where are you taking me?

MLUNGISI: You need to shut up if you know what is good for you.

Mlungisi pulls her down the street and they go through the gate of one of the houses. He leads her behind the house where there is a shack.

MLUNGISI: (sternly) Come in and don’t make a noise if you value your life.

The cheerful friendly Mlungisi is gone. This is a new man –his face is cold and hard with no expression – like a rock. He looks like he is going to kill someone. Noni follows him into the shack, wide-eyed and holding on to her dress. Her heart is pounding so hard she can hear it. It is very hard for her legs to carry her. She feels weak but she has to push herself forward.

NONI: (with a shaky voice) What do you want from me?

MLUNGISI: I want you. You are so naïve. I don’t know you or your sister. I’ve never met her.

NONI: What? But why?

MLUNGISI: You are so innocent, and pretty. I wanted to have you. I always have girls when I want them. I bring them here to my nest. Now take off your clothes and come to bed. I am tired.

Noni looks at the single chair next to the bed and goes to sit on it.

NONI: I am not going to sleep there. I will sit on this chair until morning.

Noni begins to sob. The room smells terrible. The only light comes from the street lights outside. There is a single bed, a prison-sized window that is covered by a piece of dirty cloth, and a small table with a candle. Mlungisi lights it. Nonelela closes her eyes and prays.

Mlungisi takes off his clothes. She can feel him coming closer. He grabs her arm and tries to unbutton her shirt. Noni starts screaming and begging.

NONI: Please sir, please! I am so sorry! Please spare me. I am willing to do anything for you, but please take me home. My aunt is going to kill me. Please let me go!

At that moment Noni hears a knock on the door and male voices. She wants to cry for help but Mlungisi puts his hand over her mouth.

MLUNGISI: Be quiet or I’ll kill you.

The knocking stops. Noni closes her eyes and tries to shut out everything that is happening to her – the sweat from his body, the smell of his breath. The pain she feels after he rapes her is indescribable. She cries all night as he snores next to her. Early in the morning she sees a light through the small holes of the zinc roof. She doesn’t know where they are. She doesn’t know how to get home, so she waits for him to wake up.

Eventually Mlungisi wakes. He goes out and comes back with a basin of water. He washes and makes Noni wash too. He takes her panties and rips them up in front of her.

MLUNGISI: Don’t think of going to the police. They won’t believe you. None of this happened.

After they are dressed, he grabs his keys, pushes her outside, and locks the room. They leave without even saying a word to each other. It is only out in the street that he speaks again. Mlungisi counts out coins and hands them to her.

MLUNGISI: You will get your taxi there!

He points across the road and then is gone. Noni waits for the taxi alone. She is so relieved Mlungisi has gone, but she starts to blame herself for what happened. She tells herself she should never have spoken to a stranger. What had her aunt told her about never speaking to strangers? She was stupid. She had been too nice, too trusting. She had encouraged this guy. She begins to think that she deserved everything that happened to her.

She is lost in these thoughts when the taxi comes. As she is about get in she notices that people in the taxi are staring at her and she realises that tears are pouring down her cheeks.

Tell us: Do you think that Noni is to blame for what happened to her?

< previousintronext >
Login to Comment
162 Responses
No she did nothing wrong,she was just being nice to the guy with ruthless intentions
AmJæ · 4 days ago
So complicated
Lithembar · a week ago
No , because when something bad is about to happen to you don't always spot it from the distance for you to avoid it ...yo get dump when this kinda things happen to you....I'm talking from experience....I've experienced the same while I was in high school but I'm over it now
Ntsikie · a week ago
Kidnapped, raped n killed afterwards
Ntsikie · a week ago
It is complicated because I believe that for Noni to be so naive is a result of her upbringing to trust so easily as it looks like she wasn't empowerment as a young child. So in turn she will feel guilty even though it isn't her fault. Her level of naivety is too much and it made her an easy target for Mlungisi.
Nke · 2 weeks ago
Load More
Go to Library