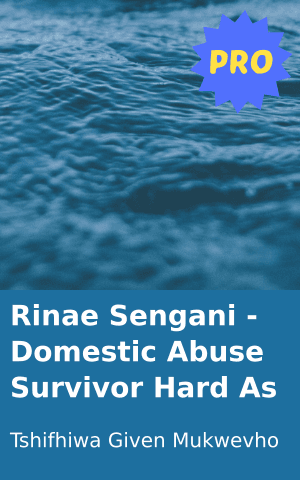 People always have ideas to start this or that project but invariably keep postponing the implementation of it by just procrastinating.

A survivor of domestic violence, Rinae Sengani, 31, had a vision to work for society most particularly in relation to issues of empowering women and children. So, when her friend, Portia Rasilavhi was brutally murdered by allegedly her boyfriend, she was traumatised and hurting.

“I was deeply disturbed by the nature of her death because I know how painful it is to be abused by a man. Her death really disturbed me. I was a woman drenched in pain and trauma which really compelled me to waste no time but realise my dream of initiating the Rinae Sengani Foundation.”

The abuse of women and children has become so rife in many communities that some victims even become somehow lukewarm about speaking out against abuse, but not Rinae.

Rinae is not just brave for nothing. She endured being in an abusive relationship for two years. She was emotionally, physically and financially abused. She would get assaulted just for speaking to a man or getting a lift from one.

“I would sometimes get beaten for not being in the mood for being intimate, because that would simply mean that I was cheating.”

In the relationship, the partner would demand that she bought expensive items for him and his friends from the shops using her own money.

“He forced me to hand over my bank card and the pin. I would just see the SMS notifications of some transaction in a night club outside town and my heart ached with heavy pain. All this was happening under my roof, not his roof, but my roof.”

“I was all along too ashamed to tell my sad story of abuse in the relationship – the story that not even my family and friends knew, because they didn’t know of the kind of abuse I was going through.”

“I would be told painful words, called by this deep Venda swearing names, I’d be called a whore and a slut.”

She would open cases against the partner and later close them, because she loved him, and felt she could not take her partner to jail.

“I was a regular at the local police station. They didn’t even take me seriously any longer.”

All this continued until one Saturday night when he assaulted her so badly that she was unconscious for a few hours. She was left in the house and when she regained consciousness, he was not there.

“I moved from that place with all my belongings the next morning, and found another place to stay some 120km away. It was over.”

“So, I urge all women who might be going through abuse to refuse to die in silence. Above anything else, love your life.”

Her friend’s brutal killing on 27 April 2017 came as a rude awakening to her.

“Our work entails giving support for victims in court in aims for justice to be served. We mobilise all affected people most
particularly on the community level to go to court and march against the suspect’s bail application. We also make sure that our visibility during the trial gives pressure to the court to meet out harsh sentence.”

“When we were busy with Portia’s case, the killing of women and children became very common in the Vhembe district. That’s where our involvement in such cases became very active. It breaks my heart when I realise that in most cases of abuse against women justice is not being served effectively.”

“It becomes even worse when a deceased woman has left behind minor children who will have to grow without a mother. As a foundation we get involved in supporting the orphans either financially or by providing clothes.”

At first, when she started out with the foundation, her parents were uncomfortable with her work citing safety reasons. They felt she was putting her life in danger since her work entailed working with victims and angry, bitter perpetrators (some of whom had killed before).

“But after realising the impact and change I am bringing to the society, saving lives, bringing hope to the hopeless, being a relevant voice to the voiceless, they then began to accept my calling. They also supported me emotionally, spiritually and financially since funding is still a huge challenge for the foundation.”

Indeed the kind of work she does, however, does not come cheap.

“Yes – I have been getting threats: anonymous callers who would call in the night. Some men who have been reported for child maintenance by the mothers of their kids would come clean by approaching me to act ‘lightly’ on their cases in regards to my involvement in the maintenance court.”

She sees the kind of work that she does as a calling. “It gives me contentment; it completes me and affords me so much courage to go out there to fight gender-based violence in our society. This kind of work can only be done by a selfless, fearless heart, and a brave character.”

Rinae Sengani Foundation operates with funds from Rinae’s pocket. She does not have any other sources of income, and she only finances her organisation from the allowance she gets from home.

“I have been applying for funding with no luck. But with hopes, one of these days we’ll get a breakthrough.”

She resides in Gogogo village, Limpopo. She previously worked for a media group as a sales and marketing manager. Thulani Mbenge - Boxing away obstacles
Login to Comment
6 Responses
Report gender based violence let's stop allowing abuse from our boyfriends and husband's lets report them to the police and get them arrested.
agathamologadi@gmail.com · a year ago
She's my mentor ?
rotgavhi · 4 years ago
Wow the foundation is doing a great job
Sphe N · 4 years ago
Becuz of you i have little hope but i am still in the relaisenship and every thing in this story is still happening to me so pls help
ilhaamorris@ gmail.com · 4 years ago
You are doing great work. Don't let anyone stop you. I share with you Mother Teresa's "Anyway" poem: "People are often unreasonable, illogical and self centered; Forgive them anyway. If you are kind, people may accuse you of selfish, ulterior motives; Be kind anyway. If you are successful, you will win some false friends and some true enemies; Succeed anyway. If you are honest and frank, people may cheat you; Be honest and frank anyway. What you spend years building, someone could destroy overnight; Build anyway. If you find serenity and happiness, they may be jealous; Be happy anyway. The good you do today, people will often forget tomorrow; Do good anyway. Give the world the best you have, and it may never be enough; Give the world the best you've got anyway. You see, in the final analysis, it is between you and your God; It was never between you and them anyway."
Serenflipppity · 4 years ago
Load More
Go to Library