Life takes you in different directions. Sometimes hard to keep up with its never-ending twists and turns. Our next Inspiring Tomorrow candidate is the example of resilience even with the changing tides of life. One small misstep altered all the plans she had for her future. Through strength and determination, Amanda Ntozonke fought her way out of situations she thought she would always be stuck in, with no way out.

“I am from a small village called Cacadu, in Lady Frere. My village is surrounded by mountains. There was no electricity back in my day, we used to cook outside and do laundry in the river. I attended my primary classes at Hlathikhulu Primary School.”

When going to school, Amanda says she used to walk quite a distance, as her school was in another village and her family couldn’t afford to pay for transportation. As the first-born child, Amanda saw the sacrifices that her family was making, so she never complained about the things she didn’t have.

“I did struggle a lot, especially when it came to school. Going to school without having porridge, you have no food for lunch time. When you go back home after school you know you will eat samp, with unovatala (water with sugar), plus studying during day time knowing we have to save one candle to last us a month.”

Seeing the struggle in her community with lack of resources, Amanda says that it taught her to think outside the box when it came to what she wanted to be in the future.

“Growing up in rural areas you know your roots. My elders taught me to understand how to make money without being employed by someone else. We would plant vegetables and fruits depending on the season, sell them to other places and use that money as the source of generating income.”

Not one to let her situation define who she is, after she got pregnant during her matric year, she was forced to drop out of school to hide that she was pregnant. This gave her an opportunity in getting more involved in her family’s budding business, while taking care of her child.

“As a family we never bought food because we could make our own through farming. My grandfather had cattle, sheep, chickens, pigs and goats. So, we would sell some to make more money. I would count the money and decide where it should be used or saved. Growing up in rural areas you save a lot of money because there is no need to buy a lot of things.”

Her family wasn’t accepting of her having a child at such a young age, but seeing how hard she worked to take care of her child and the family, her parents rewarded her by letting her go back to school. She finished her matric and decided to move to Cape Town with her mother and siblings.

“Coming to Cape Town was a blessing, I used the money I saved back home to start my own business. I’m running my own braai place now, I also have a pig farm, the meat that I sell in my braai place is my own. I want my family to benefit from my business and participate as it’s our success not just my own.”

Even though many may think that Amanda’s success has reached the finish line, she doesn’t. She still has dreams of expanding her business to greater heights.

“In the future I see myself owning a lot of businesses in other places to generate more income and create opportunities to employ more black people and pay them better money. Being born in the most disadvantaged province didn’t get in my way but most people can’t get out, which is why I want to hire people who don’t have access to resources.”

Amanda thanks her family for her success but she also says that without motivation to do better for herself as well, she wouldn’t be where she is today. She also encourages young people to focus on self-employment.

“Young people, don’t focus on one thing, don’t even try to be dependent on someone else. Start your business. It may be slow at first but as time goes on you will see and appreciate the merits of your hard work.”

Amanda is an example of what happens when you work hard enough for the dreams you have for yourself. Invest in yourself because no one will ever believe more in you than yourself. Work hard and save as much as you can because life is determined by your own choices, not anyone else’s.

Tell us: Which part inspired you the most about Amanda’s story? 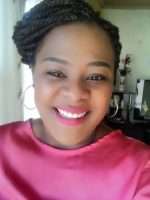 The final curtain call
Login to Comment
52 Responses
The last paragraph, very powerful words
Shori Mpinga · 11 months ago
Taking care of family business whilst having a child shows she's a hard worker.She deserves all the happiness and success.
Miss Pee · a year ago
Self-motivated.🙏
Madiba Bonolo · a year ago
The never give up attitude is what j inspire
Teishi M · a year ago
This part that says "young people don't focus on one thing, don't even try to be dependent on someone else. Start your own business".✊
Team24 · 2 years ago
Load More
Go to Library