“Always try to better yourself, be better, be a better you than yesterday. Don’t let anything or anyone drag you down,” says Edwina Stevens, a 36-year-old education student who grew up on the Cape Flats.

Edwina explains that her growing up was anything but easy. She grew up with a single mom and her two older sisters. She emphasises that they were very poor.

“My mother had to work alone. Where we wouldn’t even know what we’d have for supper that night, but she always came through. I was deprived from a lot of things in life, but through the grace of God I came this far.”

To further add to Edwina’s hardships was when her mother fell ill in her matric year.

“I basically had to care for her because at that point both of my sisters were married and were out of the house.”

Edwina failed her matric year and didn’t go back to rewrite as she still had the responsibility of looking after her mom. Her mom passed on two years after Edwina left school.

After the passing of her mom, Edwina describes life as just going downhill for her.

“I started drinking, getting friends, going clubbing. Schooling and studying was the last thing on my mind as I had to fend for myself. I had to look for a job, look after myself. There was no one to motivate me.”

Naturally looking for a job without matric is difficult and Edwina can attest to that. She had so many challenges because of not being able to find a job.

“It was very hard for me, going from day to day, having challenges of not knowing what to eat, going hungry for days, getting a slice of bread from a neighbour.”

After searching for a job for some time Edwina finally found a job at a printing company where they just needed people to come for a month at a time, to do some casual jobs. However, the job was part-time and they would only contact her when they needed her which was every few months.

Edwina later realised that that the drinking and the partying was not paying off. It’s at that point that she met her husband.

She says he motivated her to stop partying and that she eventually gave up drinking and smoking. Her husband was her pillar of strength and encouraged her to better herself.

“The only time I found a decent job is when I got married. After two months after I got married someone got me a job at Spar and that’s where I stayed for four years.”

Edwina realised that working in a store was not what she wanted to do for the rest of her life and decided that teaching was her calling.

“At first I didn’t know what to do. I volunteered at church, in a Friday Fellowship group and then I started working with children. Here I decided that this is for me. Working with kids, helping them grow in some form and way.”

But in order to study she had to get over one hurdle which was rewriting her matric and she did just that. Edwina rewrote her matric in 2019.

As Edwina explains the decision to go and study wasn’t an easy one as there was no financial help, no bursaries, so all the finances came from her and her husband.

“But yet again through the grace of God. I finished my first year. Now I’m in my second year.”

Another pillar of motivation and encouragement Edwina expresses was due to her sister-in-law and her sister-in-law’s husband. She emphasised that they are her mentors and would always direct and guide her through things she doesn’t understand.

“What pushed me was my circumstances and the support I got from my husband, sister-in-law and her husband. They gave me motivation to prosper in life. Just get up, better myself and do something.”

Edwina is currently working as a cleaner at a guesthouse while studying. She is in her second year of her three-year Grade R Diploma at Lyceum College. Edwina says that she’d like to do an additional two years at university to obtain her degree.

Experiencing such difficulties in life, Edwina’s advice is to not look back: “Keep your eye on the prize. It’s all through the grace of God, you can do nothing without God. Never look back, keep the faith and stay on your knees.”

Tell us: What is your motivation to make a positive change in your life? 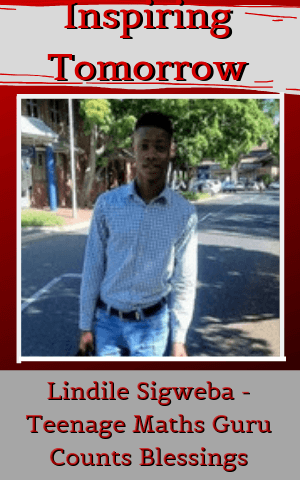 Wanga Mukwevho - Visually Impaired But Has Ear For Music
Login to Comment
106 Responses
Never give up ,never stop praying for guidance
Katy9 · 2 weeks ago
To never give up no matter what
kaymore98 · 2 weeks ago
As of today, I'll persue my dream of becoming an early childhood development practitioner and a facilitaor. I so much relate to her story of being raised by my mom alone fortunately she's still alive.
msramohloki88@gmail.com · 2 months ago
Very interesting indeed...life can seem to be amazing sometimes...one should never give up
Jahbza · 2 months ago
My past motivates me to do better everyday
Unathi99 · 2 months ago
😃God is amazing
Bomiso · 3 months ago
This is very inspiring..You can't do anything without God,just kneel down an look forward.
Manjenjenje · 3 months ago
In life never give up, despite what the negative toxic people may say about you, keep moving forward and never look back until u reach to your dreams 😍
Team24 · 4 months ago
Never give up to achieve your dream
thandiantonia · 4 months ago
Such an inspiring story,hard work and books are very important.. life is hard to all of us keep motivated and most importantly PRAY TO GOD.
MaGumbi · 4 months ago
Load More
Go to Library