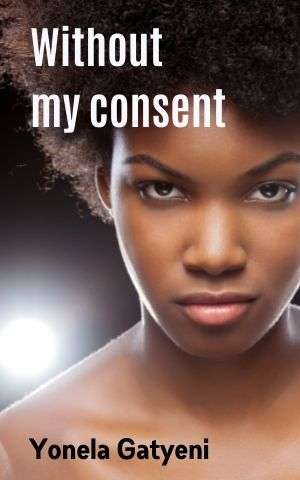 I had been staring at my reflection in the bathroom mirror for the longest time when Zinhle finally made me get out so she could get ready.

There was no trace of what happened to me last night. I didn’t have a single bruise; not even the slightest scratch on my body. It was like it never happened, like I had dreamed it all.

Only I didn’t dream it. I could still feel his lips and hands all over me. Even though my body looked the same, everything in me had shifted. Last night hung over me like a dark cloud; I just couldn’t shake the foul mood. I felt angry with myself and I was taking it out on everyone else.

I knew that what Ayden did was wrong. It felt wrong. But then he woke up this morning and was talking to me like nothing bad had happened. He seemed to think we were somehow now ‘together’ which just made things feel super odd.

Did he not realize that he had hurt me? How could he think that what he did was okay?

Or was it me? Did I miss something? Maybe it wasn’t all that bad … I mean why would he act like we were okay if he knew he’d done something wrong? He couldn’t possibly be that twisted!

Even if it was sexual assault how would I prove it? I didn’t have a single bruise and he used a condom so there wouldn’t be any DNA. I had just lain there in the end.

I didn’t know what I should do … or even what I wanted to do. Except stay away from Ayden. It seemed bizarre to simply ‘go with the flow’ and be his ‘girlfriend’, or whatever, now. I felt violated.

Staying away proved difficult when we had the same friend group, and he wouldn’t stop calling and texting. I managed to avoid him for a week and I was feeling as good as I could be, considering the situation.

However, my reprieve was short lived. Half way through the next week, he showed up at my door. He didn’t seem angry or worried. In fact, he was happy to see me. I had opted not to go out on a Wednesday night and made up some excuse. He probably bumped into my housemates and found out I’d be home alone.

I made it clear that I needed to study and he seemed perfectly content with sitting across from me in the living room playing with his phone while I pretended to read my textbook. So I let my guard down and relaxed cos it seemed like we would just be hanging out.

I got up to go get a blanket when it started feeling chilly. When I turned to leave my room I found him standing in the doorway with a grin on his face. I felt uneasy … I just stood there … waiting for him to make the first move. He slowly walked closer, his eyes not leaving my face.

Couldn’t he notice how uncomfortable I was?

“I think you’ve done enough studying for tonight, don’t you? We should have a little fun.”

“I still have a lot to get through.”

“Then take a study break. A few minutes won’t hurt.”

And then he was on top of me, his breath hot and heavy on my face, again. He totally ignored my begging him to stop, again. He kept going even though I said no and tried to push him off me, again. It felt like a sick, twisted sense of déjà vu. He was relentless and it hurt just as much as the last time if not more.

When he was done he got dressed, gave me a soft kiss on the lips and then readied to go, stopping at the door.

“Good luck on your test. We should go out after. You deserve a treat – you work too hard. I’ll text you later.”

And then he was gone. How did he think this was okay? Why was this happening to me?

But … perhaps I needed to give him a chance. Surely I was making this out to be worse than it actually was? He seemed to think we were fine … now in the ‘relationship’ I wanted …so why was I making him the villain?

Because if he was my boyfriend then he couldn’t be my rapist.

So in the spirit of ensuring that we were headed down a path that led to us being together, I went to see him. I planned to have sex with him, consent and all. I was such a fool! What was that saying about ‘counting your chickens before they hatch’? Well that’s what I did.

“Lu, I’m not feeling it. All this kissing isn’t doing anything for me.”

“What do you mean? So you don’t want to have sex?”

“No I want to have sex with you. I just mean you kissing on my neck isn’t going to get me hard.”

“So what else am I supposed to do?”

“Well … you could kiss me a little lower.”

“Much lower than that. You know what I… what I mean.”

I couldn’t believe it – he wanted me to give him oral sex. I sat there on my knees eyeing him as he shimmied out of his pants. He wanted me to give him a blow-job. I reached out and tugged him with my hand then leaned in a little, but my heart wasn’t in it. I just couldn’t do it so I got off the bed and picked up my jacket and my bag then headed for the door.

“Where are you going?”

So I did. I left. In that moment it had dawned on me that he couldn’t be aroused unless he was forcing himself on me. Which meant he was sick and he was the monster I didn’t want to believe he was. I couldn’t believe I had put myself through all that – for a man who was only interested in degrading me, without remorse.

So I was done and as far as I was concerned we were over in every sense of the word.

Tell us: Is it common for a person in a one-sided, troubled relationship to persuade themselves that their partner is not the bad one? That the fault lies with them?