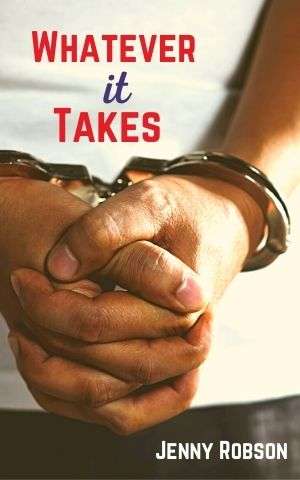 No, the police sirens are not far away at all. And they seem to be getting closer all the time.

That is when Mrs Phiri remembers the news item that she half-heard on the TV. “Police say that they are closing in on the Perfume Serial Killer. His arrest is imminent.”

Is it possible? Is there a chance that her beloved son Tshepo is the killer? Has Angelique’s betrayal pushed him over the edge? Has he used those black lace pantyhose to strangle the women? Then sprayed them with the Angel Child fragrance?

Mrs Phiri stands in Tshepo’s bedroom, looking down at him. He lies there curled up under his duvet like a little boy lost in sleep. His breathing is soft and regular, his face calm and innocent.

No, surely not. Her beautiful son with his golden smile could never, never do such terrible things. Surely not? Yet still the police sirens draw closer.

Mrs Phiri whispers, “I will protect you, my beloved boy. Just as I have always protected you and cared for you since the moment you were born.”

And this is true. When other boys fought with Tshepo out in the street when he was younger, his mother always rushed to his defence. “Don’t you dare hurt Tshepo! I’ll hurt you if you make him cry! I’ll break both your arms! Leave my son alone!”

And back when Mr Phiri still lived at home, when he thought Tshepo should be punished, Mrs Phiri would stand between her husband and her son. “Don’t you dare hit Tshepo! I don’t care what he has done! I’m warning you: if you hit Tshepo I will never forgive you. Never!”

And then Mr Phiri would shout back, “You spoil that child, Naledi. How will he learn if we don’t teach him? How will he know what is wrong and what is right? You be careful. Tshepo will grow up into a monster without a conscience.”

A monster? Mrs Phiri looks down now at her sleeping son. No, he could never be a monster. He was brought up with only love and kindness. How can that turn someone into a monster?

But now the police sirens have stopped. Through Tshepo’s bedroom window, Mrs Phiri can see that three police cars are parked right outside her gate. And all the neighbours are gathering around them.

She knows what she must do. Just in case! Just in case! She opens Tshepo’s top drawer and takes out the black lace pantyhose and the bottle of perfume. She slips both into the pocket of her apron.

Then she takes Tshepo’s hooded jacket from where it hangs on his wardrobe. She carries it to her own bedroom and slips it on a hanger in her own wardrobe.

There! Now let these police try and arrest Tshepo! They have no evidence.

But the police are already banging on the front door. “Police! Open up! Tshepo Phiri, are you inside? Open up or we will break down the door.”

Mrs Phiri opens the door and six large police officers push past her. “Your son, Tshepo Phiri? Where is he, Mma?” a sergeant shouts at her, not showing her any respect. He leads his men to the bedroom.

And there is poor Tshepo, sitting up in bed. With his eyes wide in shock and terror. Mrs Phiri longs to put her arms around him, to tell him that everything will be alright. But she cannot get near her son. The police are all around him, yanking him off the bed with rough hands. Shouting at him to put some clothes on.

“Don’t hurt him. Please, you mustn’t hurt him,” Mrs Phiri begs from the doorway. Tears run down her cheeks. But the policemen ignore her. They don’t even look her way. Instead they yank poor Tshepo’s arms behind his back and handcuff him. Then they start pushing him towards the door.

Mrs Phiri feels that her heart will surely break in two. She cannot help her son. Yet still she calls after him as he is pushed towards the police cars. “Don’t worry, love. Mama will sort everything out for you. Mama will make everything right. Mama will protect you. You are Mama’s precious, best-beloved little boy.” She is speaking the way she used to speak when he was a little child, back when teachers were mean to him or other little boys fought with him.

The police car’s door slams closed on her son. The neighbours are all gathered around, pointing and gossiping with each other. Inside, she can hear two of the police officers searching through Tshepo’s room. She goes back there to watch.

“Where is it, Mma?” one of them demands rudely. They really show her no respect.

“Perfume? Why would my son have perfume in his room? He has some deodorant there on the shelf. See? Some Shield and some Adidas. Is that what you are looking for?”

The two police officers shake their heads at her. As if she is very dumb. And then they slam Tshepo’s door shut in her face. She can still hear them pulling things out of his drawers and wardrobe shelves. Getting more and more angry as they search in vain. Mma Phiri pats her apron pocket and manages a small, sad smile.

In the kitchen, on the TV, some policeman with many badges is talking into a microphone. “We are happy to announce that we now have a suspect in police custody. We believe him to be the Perfume Serial Killer. His bail hearing will be arranged for tomorrow.”

Tell us what you think: Was Mr Phiri right? Do children need to be punished so they can learn about right and wrong?