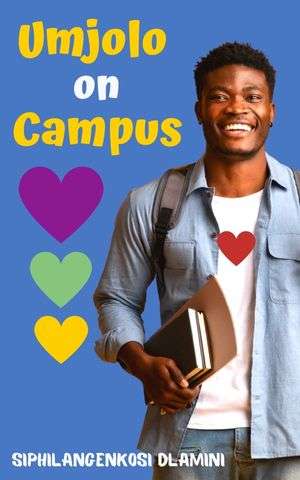 I have always thought that there is something wrong with Fridays. They come too quickly and before you can blink they are gone. This particular Friday had behaved differently, though: as if it had sensed my anticipation of its midday hour, when I would be meeting Paballo for ice cream.

You see, I could not wait. The hours of lectures and tutorial classes had dragged on until I had threatened the universe that if Friday did not come soon, I would throw myself out the window.

And so, Friday midday found me sitting at the shabby benches in front of Treats, which happened to be the best ice cream shop on campus. Kovsie students disagree on a lot of things. But we all agree that the best ice cream at the Thakaneng Bridge food court is found at Treats. Their ice cream has the tendency of melting gently in your mouth. You only get three flavours per cup, but when those three flavours meet on your tongue, it is an explosion of flavour equalling to three states of euphoria in one cup.

I was looking at my phone constantly as I waited for Paballo to show up. By the fifth minute after midday I had checked more than twenty times. I was about to start pacing about when I saw her smiling through the crowd. To say her walk was graceful would have been an understatement. However, it was not her that caught my eye, but the girl she walked with.

That girl… she had a smile that would have cut through cold metal and left it boiling. My mouth still hung open as they approached the bench. Their pace slowed and the girl’s steps remained as majestic as her smile. It was like she was walking on air! I quickly diverted my gaze to Paballo, while they grabbed chairs to sit down. I had thought that she was walking with the girl because maybe they were going in the same direction. My heart skipped a beat when I witnessed both of them sit down and put their bags on the table. Now, considering how gorgeous both these girls were, it is fair to say that my heart experienced a premature ventricular contraction.

First dates are already complicated enough, I thought to myself. But to bring along a half-angel-friend to one is preposterous!

“Hi, Siphila,” smiled Paballo. She looked even more mesmerising today than the last time I saw her. She wore an African print doek. “I’m sorry I’m late,” she said.

I wanted to hug her and tell her she had been the missing link in my life these past 21 years. But apparently utterances like that were frowned upon in every part of the world except in my mind.

“Hey ladies,” I responded. “It’s fine. I got here only five minutes ago”. This, of course, was a lie. I had been there for the past half-an-hour, thinking of cool and romantic things to say. I had run over the script again and again in my mind. It was perfect! Until she brought the other girl. It still baffled me why she had brought the other girl to our first date.

“Haw Paballo, aren’t you gonna introduce us?” asked the girl. She had a very beautiful Afrikaans accent. Her hair was straight and natural and her skin a light caramel.
Paballo giggled and blushed. “Oh, I’m sorry,” she said in that melodic voice of hers. Oh! What a sight! Her smile had this feature of sliding back towards her ears while her lips pouted forward when she blushed. I am sure this is what the evening of creation had looked like when God was making the world.

“Siphila, this is my friend Roslyn,” she said. “Roslyn, this is Siphila”.

I turned to Roslyn and smiled. This was the first time I was getting a chance to look at her properly since they got here. I began to understand why my father had decided on taking nine wives. How could one possibly choose between these extremes of human gorgeousness?

I held my smile for a minute or so, as I let my stare linger over her face. Roslyn had a beautiful peaked nose that melted back into her face, complementing her big cheeks and broad face.
“Pleasure to meet you, Roslyn”, I said in the most gentlemanly tone I could muster. She smiled back as she presented her right hand sideways, going in for a handshake. I had learned a long time ago that handshakes are a trap and generally not romantic. So I took her hand and kissed it. She blushed and giggled under her breath while Paballo just burst out laughing.

“God help us all,” I muttered under my breath, almost incomprehensible. I made sure to call Pabbie as soon as I got home after class. The melody of her voice was still as soothing as the first time I had heard her speak in that hallway. I was still confused why she had brought her friend to our first date, but I couldn’t help but keep smiling as she explained that she was nervous because it was the first date she had ever been on. I laughed wholeheartedly and teased her that it was not even that serious of a date, just ice cream. But according to her, even a first ice cream date that is not much of a date counts a lot in a lady’s life.

Tell us: Do you think Pabbie made the wrong choice bringing Roslyn along on the date?

< previousintronext >
Login to Comment
23 Responses
Just wondering... Is this story non fiction cause the author's name is Siphila Dlamini? Varsity love must be nice moss.. .😅
Katleho Tsepane · in 43 minutes
No I do not think so. She made a good decision.
Sandile · 9 hours ago
Bad move on the their first date
Nthabiseng lavina Molotsana · 13 hours ago
No
Evah Ngobeni · 13 hours ago
Yes, things might get complicated by the look of things.
Letlhogonolo Kotsedi · 18 hours ago
Load More
Go to Library