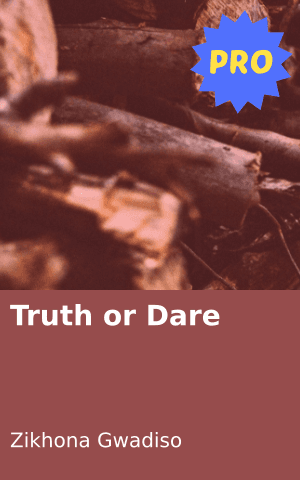 Andisiwe opened the door and let Thabo into the house. She turned towards him as they stepped inside, and he responded by kissing her lightly on the cheek. The delicious fragrance of his aftershave washed over her in a wave that made Andisiwe feel quite dizzy.

She hovered in the entrance hall, not sure where to take him. To the kitchen? But Maria might be there. To the lounge? She started popping her fingers, something she always did when she was nervous. But Thabo was the one who led her through to the living room.

Andisiwe sat down on the couch and then got up again. She felt that Thabo was watching her indecisiveness with amusement. She couldn’t settle anywhere. The truth was, she felt uncomfortable with having a man in Mimi’s house, even though she had had many chats with her aunt about guys.

Andisiwe sighed and then sat down onto her aunt’s designer couch. She ran her well- manicured hand over the beautiful upholstery, and as she did so she suddenly felt OK. She remembered again what an outgoing and understanding woman Aunt Mimi really was. Thabo settled down next to her.

“Your aunt has an exquisite house,” he commented, looking around him at the beautiful paintings, the gold ornaments, the designer furniture.

“She had interior designers flown in from Jozi,” replied Andisiwe, in response to Thabo’s compliments. “They came down just to decorate the house.”

“Well they did a good job. The house is beautiful.”

Andisiwe nodded, and they both paused to look around the room, taking in the details of all the furnishings. She could feel Thabo’s gaze falling onto her, and staying there. “You’re beautiful,” Thabo said, switched from complimenting the house, to complimenting her.

He moved closer to her on the couch and Andisiwe stood up. She walked to the kitchen to make Thabo coffee and biscuits. She didn’t quite trust her reactions to him anymore.

When they had both settled with their coffee Andisiwe found her voice. “You haven’t told me about your business,” she said.

Now it was Thabo’s turn to be hesitant. “Err,” he mumbled, then sipped on his coffee. “Um…I used to own a company, but now I’m in between negotiating a contract deal. It’s not final yet, so I don’t want to jinx it by talking about it.”

“OK,” said Andisiwe, nodding and smiling. “So tell me about the company you used to own.”

“OK,” said Thabo, leaning his head back. “Where do you want me to start?”

“From the beginning!” she said happily.

Thabo nodded, drinking deeply from his cup. “Shuu, a year ago I started a business with an old high school friend. We opened a night club, and hired the most famous South African DJs.”

“Oh really?” said Andisiwe, her eyes lighting up. “That must have been exciting!”

“Yeah it was. So I got lucky, we got a bank loan. Everything was smooth. We made money, nyhuk’ebhaya Joe, lots of money.”

“Oh wow.” Andisiwe threw her head back and laughed. “You speak slang too. You keep surprising me!”

Andisiwe put her hand over her mouth, and her eyes were twinkling. “Ha, ha, OK sorry, you may proceed…”

Thabo grinned at her, and then sighed deeply. “Thank you. Then things started to go wrong. This friend of mine, well I discovered he had a habit. And not for designer drugs – no – for tik. He saw me as a ticket out of his debt. You see he had stolen money from some rich guy to feed his habit. He was in deep.”

“Oh no. Wow!” Andisiwe was no longer laughing.

“He was using me to get the money back. He was in trouble. I think the rich guy had threatened to kill him if he didn’t give it back. All of it.” Thabo drank more coffee, and sat in silence. Andisiwe leaned towards him.

“Yes, he did,” said Thabo, slowly nodding his head.

“How?” Andisiwe frowned with concern, and Thabo continued.

“It was only a few months after we’d opened the club. I went in one morning to start business. All the booze was gone. The till was empty. I thought we had been robbed. Then I got an SMS from Standard Bank telling me I had R50 000 overdrawn on my account.”

“I was left bankrupt,” said Thabo, sighing heavily again. “I had to close down the business.”

Andisiwe’s mouth dropped open. “Yho!” she said. “That must have sucked! How did you deal with all that?”

“I had to be a man and take responsibility and not blame the world for my stupidity: trusting too much. Anyway, in the end the poor guy was killed by the man who he had stolen money from.”

Thabo cleared his throat. The two sat in silence for a while, and then Thabo looked up at Andisiwe and smiled into her eyes. “The world is full of people who take advantage of other people, Siwe. Especially the world of business. I lost everything I had built up, and had to start again from scratch.”

Thabo reached out and took Andisiwe’s hand, lifting it from where it lay against the patterned fabric of the couch. He stroked her hand and looked deeply into her eyes. “I don’t trust easily, beautiful girl. But I’ve learnt my lesson. I can tell when someone comes along who is completely trustworthy. Like you.”

Andisiwe blinked and nodded slightly. She felt very emotional all of a sudden, and her heart warmed and burned in her chest. “Of course you can trust me,” she said softly, with a hint of a smile and a slight shrug. “I’m just a country girl really.”

Thabo stood up, still holding her hand. “I know who you are, Siwe,” he said sincerely, moving closer. “I feel like I have known you forever.”

Standing up to leave, Thabo invited her for dinner that night. Andisiwe gladly accepted.

She waved him goodbye, before going to her room and dreamily beginning to plan her outfit for the evening.

Tell us what you think: What is your opinion of Thabo’s story about his friend?