Things to do in Durban when you're dead 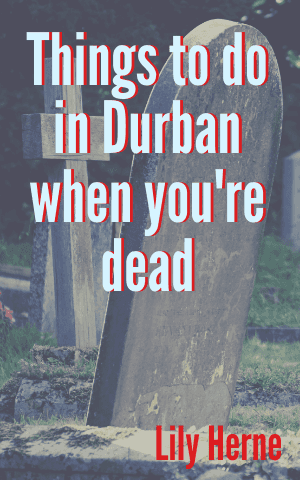 I sat in the cab of the bakkie, squeezed between Mama and Mr Cele. The mort, Levi and Zizu were in the back, all of them peering over the side.

I was feeling sick to my stomach. All of us had tried to explain to Levi where we were going, but he still thought that this trip to Durban was just a family outing. I knew there was going to be a horrible scene when we got to the camp.

Levi tapped on the cab’s small window. I turned around and opened it.

“Mama?” he said. “I told Beyoncé we were going to the beach. He says he’s never been to the sea.”

“We are not going to the beach, Levi,” Mama said. I’d never seen her looking so exhausted and sad.

“Oh please, Mama. I will look after him.”

Mr Cele shrugged. “How could it hurt? It is on our way.”

Mama sighed. “You are sure?”

I couldn’t believe what I was hearing. “You serious? We can’t take a mort to the beach! What will people say?”

No one answered me.

As soon as we reached the beachfront and Mr Cele parked the bakkie, Zizu jumped off the back and raced towards the sea. Levi and the mort hurried after her. The mort was finding it difficult to walk on the sand, and Levi reached out to take its hand.

I hung back in case anyone was watching. I didn’t want to be part of this. Thankfully, there were only a few people scattered on the beach, and most of them were ducking their heads to protect their faces from the wind.

I slumped down onto the sand and watched as Levi pretended to splash the mort. Zizu danced around their legs barking joyfully.

Mama was shouting and waving at Levi, begging him to be careful. But he was having too much fun to take any notice of her. Levi said something to the mort, and it threw back its head and moaned.

Mr Cele sat down next to me. “It is almost as if it understands what your brother is saying to it.”

I glanced at him in disbelief. “Seriously?” I was trying not to think about the way the mort had held up the mielie to its ear, like a child pretending to make a phone call.

I was about to answer when I heard mama screaming.

I stood up, realising that I could no longer see my brother. Zizu was going crazy, racing back and forth at the water’s edge. The mort was flailing in the water, waves crashing against its chest. My heart froze – was it trying to drown my brother?

I started running, only able to breathe again when I saw the mort hauling Levi out of the ocean and onto the sand.

Mama gathered Levi into her arms, sobbing with relief. My brother was coughing and shivering, but he was fine.

“The mort saved him,” she said to me. “It saved his life. How can we send it to the camps now?”

All I could think about was the crap I’d have to take at school if we took it home with us. Not even my best friend Zanele would understand. I couldn’t forget the fearful angry faces of the mob that had surrounded Levi outside the clinic.

“It is up to you, Nyameka,” Mama said, for once looking unsure; for once putting me first. “If you want to take the mort to the camp then this is what we will do.”

What do you think they should do with the mort?