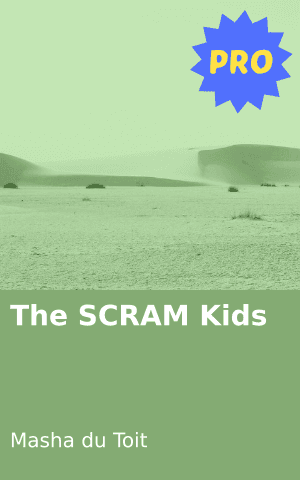 They must be far underground by now. She expected somebody to remove her blindfold, but instead they continued leading her along what must be a corridor. A very narrow corridor, from the feel of the rough concrete that brushed her arms. There was a damp, musty smell.

Somebody walked behind her with their hands on her shoulders, guiding her as the corridor turned, first left, then right, left again, until she lost count.

At last they came to a stop. There was a beep and a soft clang as of a metal lock releasing. The person behind her gave her a gentle push, and Rozena stepped through what she guessed must be a door. Now the floor felt different under her feet, smoother, and the air smelled fresher.

“Take that thing off her.” The blindfold was pulled from Rozena’s face. She blinked in the unexpectedly bright light.

Instead of the rough cave she’d expected, she was in a spacious, modern room. The walls were lined with screens displaying scenes of streets and buildings, and Rozena guessed that they were connected to security cameras.

The blond boy was already busy at a computer, while the girl was walking from screen to screen, studying each of them and making notes.

Trevor made himself comfortable on an expensive-looking leather couch.

“Who are you guys?” Rozena looked about her in disbelief. “What is this place?”

“Time for introductions,” said the girl, putting her notebook away. “I’m Zazi. This is Colin,” she nodded at the blond boy, “and I think you already know Trevor, right? We’re members of SCRAM.”

Colin turned from his computer. “In case you are wondering, SCRAM is a secret crime-fighting organisation. We combat injustice and make the world a better place.”

“Is this a joke?” Rozena looked incredulously from face to face but even Trevor looked serious.

“No joke,” said Zazi. “We’re all SCRAM operatives. Each of us has a special skill. I know lots of languages and I’m good at disguises. Colin can drive and fly just about anything: cars, planes, whatever. And Trevor can pick locks and fix things. We are only a small part of SCRAM. There are lots of other agents, all top secret.”

“What … you run all this?” said Rozena, looking around.

“No, of course we don’t run this,” said Zazi. “The SCRAM bosses tell us what to do.” She nodded at a big screen in the middle of the wall. “They send messages to us via that screen.”

“Yes!” said Zazi. “We know all about what happened to you. You’ve been set up, right? Somebody planted those drugs in your case.” Zazi’s eyes grew very serious. “Rozena. You don’t have to worry. We know who did it.”

“You do?” Rozena took a step forward.

“You did?” Rozena stared at Trevor, who was still lying back on the couch. “So, who was it?”

Trevor just looked at her, his expression so cool and indifferent that Rozena wished she was brave enough to slap him.

“Trevor saw it all,” said Zazi. “You left your case outside the school hall during assembly this morning, didn’t you?”

“Of course I did,” said Rozena. “Everybody has to.”

“What!?” Rozena’s mouth opened in astonishment. “Devon!” She stood, wordless for a moment, her thoughts whirling.

Devon Smit was one of the older boys, a twelfth grader. He was handsome, rich, and popular. Rozena remembered her friend Emma’s astonishment that he’d even noticed her that morning, before she’d gone in for her interview.

But Zazi was still talking. “SCRAM has known for some time now that there are drug dealers in the school, but so far we have not been able to prove anything. We suspected that Devon was part of it.”

“But you can just tell them!” Rozena turned to Trevor. “You can tell Mr Peterson and the competition people what you saw.”

Trevor only shrugged. “Who would believe me?”

“It’s true,” said Zazi. “Everyone thinks Trevor is a troublemaker. He has a criminal record and everything. Devon’s family is rich, his father’s always giving money to the school. Even if Trevor told what he saw, it would do no good. He has no evidence. It’s his word against Devon’s.”

Rozena wanted to argue but she knew it was true. The momentary feeling of hope left her.

“But we can still help you,” said Zazi. “You have special skills too, don’t you? You’re really clever with computers. If you become a member of SCRAM, and use your skills to help us, we can work together to clear your name.”

There was a beep, and everyone turned to look at the big screen in the middle of the wall. Large white letters displayed the message: ‘Welcome Rozena Claasens, new agent of SCRAM. Stand by for instructions.’

Tell us: How do you like the idea of a secret crime fighting organisation operating in schools?