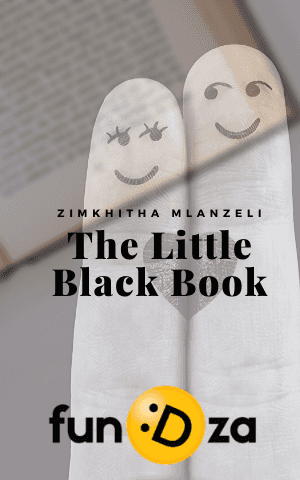 I can’t believe I’m going to this stupid double date. I take one last look at myself in the mirror … Yeah, that will do. Foxy will just have to take me voetstoets. I’m in a blue African print shirt, jeans and sneakers. I’m happy. Now I must pick up Dave and head to the restaurant.

The girls are already there when we arrive. I’m quite happy to get out of the car and away from Dave’s cologne.

Introductions are made. Foxy’s real name is Joyce. She’s with her friend Zandile and, though both girls are lookers, Joyce is much prettier than Zandile and, by Dave’s standards, much hotter.

“They’ve started without us, Tumz. Now we must catch up,” Dave says, raising his hand to attract the waitress. He likes being served by women. He does this so he doesn’t have to tip them. He just leaves his number on the receipt (after I’ve settled the bill) and makes sure he hands it to the waitress himself.

She doesn’t seem interested. I bet she’s disappointed. She keeps jumping in on Dave and Zandile’s conversation. I don’t really mind; I just want to get out of here.

The ladies decide that we split the bill – they are not “those kind” of girls. I’m happy to do so and I pay for Dave and myself.

“How about we go dancing?” says Joyce.

Her suggestion surprises me, but then I realise that it’s directed more at her friend and Dave than me.

“Oh yeah, we haven’t been to Long Street in forever,” Zandile agrees.

“That settles it, then. Let’s go.” Dave closes the conversation without even asking for my input.

He insists on driving. He wants to take things slow with Zandile and leaves me stuck in the back seat with Foxy, who looks out of the window as we drive. I really don’t care. This is the worst blind date ever.

We get to the club and it’s packed.

He quickly orders a round and brings it over to the table we’re sharing with other partygoers. I’m happy he paid for something.

My eardrums are almost exploding from the loud music. Dave and Zandile are sitting right up close, almost nibbling ears as they try to chat over the music. Whatever he’s saying to her is working; she’s giggling every two seconds.

“You know you ladies are just wonderful,” Dave says, slurring his words. “If I wasn’t so smitten,” he says, touching Zandile’s chin softly, “I would take you both home.”

The girls giggle, Joyce more than Zandile. I see hope spring in her eye and I’m sure she wishes she was sitting where Zandile is. Even better, that she was Zandile.

After a few rounds, Joyce surprises me again.

“Let’s dance,” she screams into my ear. I almost drop my drink. This girl is on a mission. Again, they all agree, before I can protest. I don’t dance. I’m hopeless.

I’m left at the table by myself watching the drinks.

After two songs, and two beers on my own, Zandile returns to the table.

“Lost them on the dance floor,” she yells, then takes a sip of her Savannah. “But I’m not one to miss a party!” She runs off to the dance floor again.

It’s only after five songs and Zandile’s second return to the table that Dave and Joyce return. I can only imagine what they’ve been up to.

Joyce sits down, almost breathless, and asks me to get her another drink. I want to protest and say it’s late, but Dave is heading off to the dance floor again and I have no choice but to oblige. I don’t even have anything to say to her.

I’m glad when the night is over and Dave says he’s off with Zandile, ordering me to take Joyce home.

“Take the car; we’ll Uber,” he shouts as we walk out of the club. His hand is around Zandile’s waist as he hands me the key, as if it’s his car.

What a relief. I’m almost grateful.

But the painful truth is that she would rather hook up with someone else than be stuck with me. I shrug and head to the car.

Question: Where do you think Dave and Joyce went for so long?

< previousintronext >
Login to Comment
40 Responses
I think they have sexual relations.
Mr.Heart · 6 months ago
Toilets
#Tumi · 6 months ago
Maybe toilet or outside to the car to have some romance
Phidza · 6 months ago
Rest room
Baby blue · 11 months ago
They went for a little bit of intimate relation
Kilaw · a year ago
Load More
Go to Library