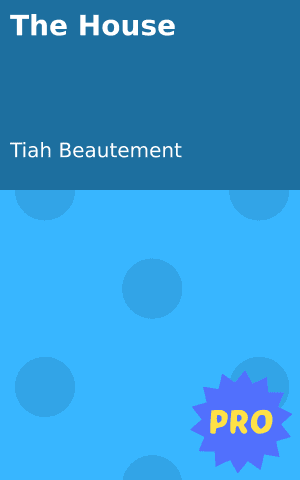 The vines appeared to be beckoning the teens closer, making fear tickle Ximena’s spine. Not that she mentioned that to Jordan. She didn’t want him thinking she was a chicken. But every nerve inside her was shouting, No, no, no!

“This place is creepy,” Jordan said. His gaze ran up and down the outside walls. “I don’t know how I didn’t notice before?”

I can’t believe you hung out here, either, Ximena did not say. Instead, she said, “Let’s get this over with. That is, if we can even find a way in.”

The moment the words left her mouth the front door of The House swung open.

Jordan eyeballed her. “You sure you have nothing to do with this place?”

“Do I need to remind you that this was your idea?”

“Right,” he said, gesturing towards the door. “Ladies first.”

Jordan released a huff of a laugh. “You’re funny.”

Ximena wasn’t sure if that was a compliment. Probably not, she decided.

Jordan turned back towards the open door. “Right, then. Let’s do this.”

The pain hit Ximena in the chest the moment she stepped across the threshold. Breath whooshed out of her lungs from the impact. But it wasn’t physical. It was as if The House had feelings and they were slamming into her body.

“Ximena!” Jordan rushed to her side, slipping an arm around her waist, supporting her. “You okay?”

“Let’s get you outside.”

The door to The House swung shut before they could move.

The pain in her chest softened, morphed, until it sat lightly on her shoulders like a winter cloak. It was as if The House wanted her to hear it, but understood its burdens had hurt her too much.

She straightened her spine, and stepped away from Jordan. “I’m okay.”

She swallowed carefully, before giving a nod. “Yeah, I’m good. But this place. I think something awful happened here.”

The pair didn’t move as they allowed their eyes to wander around. The House was empty, yet oddly clean, but for the centre of the floor which appeared to be missing.

“Is that a well?” Jordan took a step forward, squinting in the dim light.

“Don’t,” Ximena said, grabbing the edge of Jordan’s sleeve. “The floorboards could be rotten.”

He glanced at his feet. “Don’t look that way. In fact, the inside looks in better shape than the outside. It’s like some grand home from a storybook, preserved but for the hole. You think one day the earth just sank right under this place?”

Jordan took off his banjo. “Here, hold this.”

He flattened himself on the floor and scooted over the hole. Reaching into his pocket, he removed his phone and turned the light on. “Oh yeah, there is water down here.”

“Maybe the vines are tapping into it?” Ximena said.

“Can’t tell,” Jordan said. He returned the phone to his pocket before scooting back. Standing up, he gazed at the ceiling. “But you’d think if the water was supporting the vines, they’d be in here.”

“Maybe that well is wider than the hole in the floor?” Ximena shivered at the thought.

“Alright, let’s get out of here.” Jordan took his banjo back and made his way to the door.

It would not open.

Tell us: What do you think Ximena and Jordan should do?

< previousintronext >
Login to Comment
7 Responses
Sing!
Redd88 · 6 months ago
😱😱😱😱😱😨😰look for a safe exit
The savage · 10 months ago
Look for safety exit ...
Drsiira · a year ago
I think if they sing may be the door can be opened
beautylikundaktm @gmail.com · 4 years ago
Esh...no suggestion this far..
FKay · 4 years ago
Load More
Go to Library