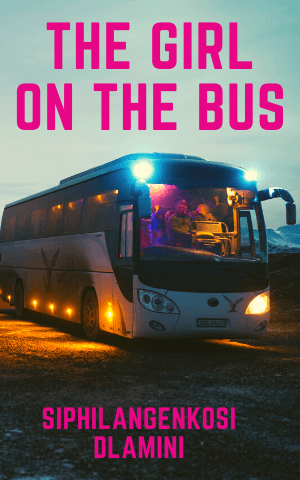 Sipho was walking down the aisle of the bus, looking for an empty seat, when he noticed the girl sitting alone, right at the back. She was looking out of the window, watching strangers going about their business, getting on and off buses in the busy depot.

The girl must have felt his stare because she turned and locked eyes with him. Sipho was held in a trance.

Immediately, he knew that she was the girl to spend the next 12 hours of this bus ride with. So he gripped his backpack firmer and walked further down the aisle towards her.

Most of the passengers were already seated and getting themselves comfortable. A sinking feeling hit his stomach as eyes turned to gaze at him. Why couldn’t people just mind their own business, he thought. It seemed that all the passengers had made an unspoken agreement to turn and stare at him as he passed their seats.

“Watch where you are going, mfana!” said an older woman with moon-round glasses. Sipho had been so busy dodging the stares he had not seen her bag in the middle of his path. He looked down at his black sneaker stepping right on the magogo’s open, brown travelling bag. He sighed and exhaled in dismay. I really should look where I am going, he thought. He stepped back a little, removing his shoe from the bag.

“Sorry Ma’gogo,” he stammered. “I did not see it”. Sipho looked to his left and saw that the old lady was eating golden, roasted peanuts from a blue Tupperware container. The delicious salted aroma reminded him of home. He smiled as he visualized his own grandmother roasting peanuts in the fire.

“Where are you going with such big bags, wena mshana?” asked a man in a yellow jacket, sitting just past the old lady.

“I am going back to varsity, Malume,” he responded heartily to the man.

He did not know the man. But his grandmother had taught him that he should address all men who were his uncle’s agemates as ‘malume’. It was respectful, she had said.

Sipho walked down the aisle, enduring the stares to the best of his ability. In return, he observed all the odd characters who looked at him. But as he approached the end of the aisle, he suddenly remembered why he had come so far, right to the back.

He passed two more seats and turned to his right, where the mysterious, beautiful girl sat by herself, still staring out of the window. She was using black headphones over colourful, beautiful braids that put Sho Madjozi’s signature rainbow hairstyle to shame.

This here is a vision of perfect gorgeousness, Sipho thought to himself.

The girl turned her gaze towards him, sliding one of the headphones to the side. He held a laptop bag, and a sack full of avocados and oranges his mother had given him that morning, as he left home. He sat down next to the girl, just as the bus began to wheeze and breathe to life. The lights came on as it drove out of Johannesburg Park Station, slowly picked up speed, swerving past countless buildings in the concrete jungle. The Joburg sun coloured the horizon orange, as it slowly disappeared behind the skyscrapers.

Sipho’s heart started beating faster, as if it was about to jump out of his chest. He was sure the girl would hear it soon. So, he took a deep, calming breath and sat back into the seat. A small cloud of warm steam escaped his mouth, like smoke, as he took in the cold air in the bus. Then he mustered his courage, and turned to the girl.

“It doesn’t make sense to me why such a gorgeous lady is sitting alone,” Sipho said. “Especially in a bus full of so many gentlemen.”

She looked up from her glowing phone, blushed, and flicked her colourful braids backwards, away from her face.

“Do you always lie to strangers?” she asked, then waited for Sipho to respond.

This girl is not following the script, thought Sipho to himself. All she had to say was ‘Seems you are the only gentlemen here then,’ but she had gone and said her own thing.

Sipho hated it when girls did not follow the script. It made the conversations he’d planned out his head much more difficult. A film of sweat built up on his face. But he shook his head and laughed out loud.

“Beauty lies in the eyes of the beholder,” he continued to flirt back.

“Maybe you should get your eyes checked out,” the girl said to Sipho, as he made himself at home in the seat next to her.

“Ohh, but I am sure the Malume sitting in front of us would agree with me,” Sipho blurted out, loudly enough for the man to hear.

Laughter broke out from the seats and heads turned to gaze back at the pair. The man sitting in front of them had a big smile on his face, left still pasted there, after the laughter.

“Uthatha ama chance, boy!” he said. “But shoot your shot, mfana wam. She could be the love of your life, and if you let her go you might never see her again.” More laughter broke out, even harder than before.

“Don’t give this boy ideas, Baba,” the girl shot back at the man. “He is already full of himself.”

The man laughed, and “Leave the kids alone, mahn,” said a woman sitting next to him. She held a young baby in her arms. Sipho guessed that she was probably the man’s wife.

“Hhay abafazi!” the man exclaimed, as he turned to face forward and talk to his wife.

Sipho laughed. The girl stared at him in dismay. Sipho was still smiling when the girl’s phone rang. Her face lit up as she answered it and started murmuring softly.

He could barely make out her responses. That must be the boyfriend, Sipho thought to himself.

Tell us: What do you think of Sipho? Has he got a chance with the beautiful girl?