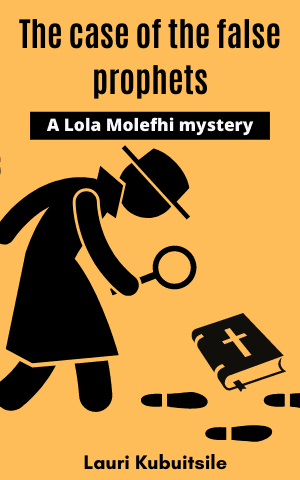 The next day was a Saturday, the perfect day to make amends with Bonang. I bought flowers (roses, red, her favourites) and chocolate doughnuts and showed up at her house bright and early, hoping we would sort it all out over breakfast.

“Lola! I’m so glad you’re here,” Bonang said when she answered the door. A Bonang who was the complete opposite of the Bonang from the day before. This one was so jolly I was sure sunlight was shining out of her eyes.

“I’m sorry about yesterday…” I started.

“Forget about it!” She grabbed the roses and took a big sniff. “Aren’t they gorgeous? Thanks, you’re the best.”

Jomo sat at the kitchen table in their flat, finishing a cup of coffee. “Hey Lola. Sorry I can’t stay. Mr Wang just called. I need to run a quick errand for him.” He kissed Bonang on the cheek and made his exit.

“So? Are you not going to ask me about my good news?” Bonang demanded.

“I got a modelling job!”

“It’s a photo shoot as part of an advertising campaign for Willows. Three different promotions. I’ll be working for two months.”

“Sounds great! I’m so happy for you.”

“I knew the prophets were the real deal.” Bonang poured coffee for both of us then sat down at the table.

“Prophets? What’s that? An employment agency?”

Bonang laughed. “No, Lola, I mean prophets, like real prophets. Enoch and Radithedi.”

“Enoch and Radithedi found the modelling jobs for you?” I did not like the way this was going.

“So how do Enoch and Radithedi work?”

“They pray for you. I met them the other day. I knew they were so powerful because they knew everything about me. They even knew I was a model, and that I was a newlywed. Can you imagine? It was spooky. Really spooky.”

“And then they told me all about myself and my problems. Then we went to the end of the village, up in those rocks behind Good Lucky Shop, and they prayed for me and now I got a fantastic modelling job. Maybe I should introduce you to them. I bet they could bring all kinds of cases your way. They’re real prophets – not like those fake ones you always hear about.”

“No, I have enough cases, thanks. So, these prophets, Enoch and Radithedi, did you give them any money?”

Bonang got up and went to the sink, facing away from me, suddenly anxious to wash the cup and spoon there. “No … why would I give them money? Money? No, I’d never do that.”

I knew she wasn’t telling the truth. It was impossible for Bonang to look at me and lie. I didn’t know what to say. If I told her that Enoch and Radithedi were likely to be exactly like the fake prophets, she’d never believe me, and we’d be back where we started with her being angry. I only hoped she hadn’t given them very much money and that the entire thing was over now that she had got a job.

When I arrived home, my hopes on both of those issues were dashed. There was Jomo waiting in the sitting room with Amo.

“Gosh, you took forever,” he said.

“Sorry, I didn’t know you were waiting for me. What’s up?” Jomo’s face didn’t hide emotions and I could see he was very upset.

“How much did she take?”

“R2000, so far. She gave it to those thieves!” Jomo paced up and down the floor angrily.

“She told you? Yes, and they want more. She thinks it doesn’t matter if we use the house fund because Enoch and Radithedi will make sure we get a house anyway. They’ll pray for it. She thinks it’s some sort of investment.”

I wondered what the best way to attack this would be. Jomo must have already tried reasoning with Bonang, and that had failed. I wouldn’t be able to do any better. Bonang needed to see things as they really were, with her own eyes. But how?

“Jomo, let me think about this. Meanwhile, is there a way to safeguard your house fund?”

“I could move the money to my personal account. She couldn’t get at it there. I’d feel bad doing it though – it’s like I don’t trust her.”

“Well for the time being you can’t trust her. She’s being controlled by those two so-called prophets. She’s not herself. You move the money and I’ll think about how to sort the situation out.”

Jomo stood up. “Thanks, Lola. You always know how to get out of these difficult situations.”

As I watched him leave I thought Jomo had more faith in me than I did. I didn’t have a clue how to catch these two fake prophets. This was going to be a slippery one.

Tell us: Do you believe in prophets like this at all? Can prophets help you find a job?

< previousintronext >
Login to Comment
51 Responses
Prophet are spiritual gift people who can prophecy something that is goin to happen in the future. They heal thru holy water.
Nolutando Fakuni · 23 hours ago
Real prophets see things spiritually in God's way not about earthly things
Zinqobile Shongwe · 5 months ago
No I don't believer in prophet's reasob being is no bigger prophets or prophecy you can get more than the word of god i believe in the bible and i m prophet of my own life
Modiehi Kali · 5 months ago
There are real prophets who can help you find your way. But this two prophets are fake prophets.
Pholoso shephard SENOSI · 5 months ago
No, cause real prophets they don't going around,they got their place/church and they don't claim money, it's up to the person what he/she must do not give.yes a real prophet can
Sixolile Mdumayi · 5 months ago
i don't believe in them
asanda zindo · 5 months ago
Yes, if you believe you, your actions towards the prophet's instructions channel you into the law of attraction space.
Ida Khosa · 5 months ago
Yes If you find the real one
Thamsanqa Mnyandu · 5 months ago
I doubt, I suspect even the modelling job Bonang thinks she is getting is a set up
Shori Mpinga · 5 months ago
Nop, the real ones
Vundlaz · 6 months ago
Load More
Go to Library