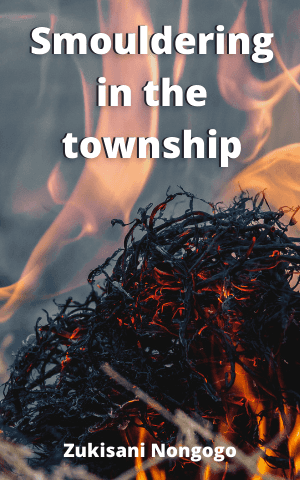 Abongile watched his mother disappear into the night, intermittently breaking into a jog and walking, making her way rapidly towards the smoke. Avela, Siphenathi and Lutho had all reluctantly gone home. Each boy had not wanted to seem like they were abandoning their friend, but each was suddenly desperately homesick, and in need of comfort.

He dished up for the twins and they sat in the lounge eating, watching TV while he watched them, his eyes still red from crying. They both looked back at him worriedly from time to time.

At one point, Sisipho asked him what had happened to Phumlani but he merely grunted an answer, not wanting to speak about it, and sensing that at seven years old they were too young to truly understand what was going on.

“Abongile, when is Mama coming back?” asked Thando.

He knew that it would be about another hour before his father came back. Like the twins, he was really worried about their mother now. What would she do when she got there? How could she help?

He realised that he couldn’t bear just sitting, doing nothing.

“Sisipho and Thando … look I’m going to go and get Mama, you hear?”

“You going to leave us by ourselves?” Sisipho asked.

“Yes, but I’ll be back now-now. Come lock the door behind me,” Abongile said, already getting up from the sofa, not wanting to give them time to think about it. He realised that it was the second time that day that he had done that very same thing.

He quickly darted into the kitchen to make sure the door was locked. He was suddenly paranoid of something else happening, but he knew that he needed to go, no matter what.

“You aren’t scared, are you? I’ll be back with Mama just now,” he repeated, once he had made sure the door was locked.

He could see Thando looked worried, but Sisipho answered, “Okay, sure. We’ll watch cartoons,” so forcefully and upbeat, that it reassured her younger sister.

“Lock the door and watch your cartoons.”

Tell us: Do you think Abongile is making the right decision by going to find his mother?