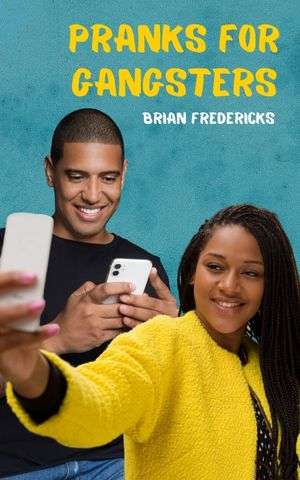 I meet up with Candice at the fisheries the following day. She gives me a plastic bag full of meat balls, vetkoeke and a few pieces of maasbanker. My favourite. I kiss her and we walk to the station.

Candice and I have an ancient Toyota. We drive to Goodwood station in the morning and park it close to GrandWest Casino, then take the train to Cape Town. That way we save the money we would have spent on petrol.

We have monthly tickets to ride in First Class. Around us, people take their seats and put their bags down. They sigh with relief. Cellphones and earphones come out and windows are opened to let fresh air in. Someone is playing reggae somewhere. The train’s engine shudders and the whistle sounds.

“I don’t know about the prank you spoke about last night,” Candice says. “It makes me worried and uncomfortable.” She holds her handbag in her lap.

“Candice we only have a thousand subscribers. We need more. Lots more.”

“That doesn’t mean you should be reckless,” she says, looking anxious. “You want to mess with drug dealers. Those people are terrible. They do terrible things. I don’t want to stand on my stoep one day and have people shooting at me.”

“Nobody will shoot at us,” I whisper in return. “Let’s leave this conversation for after we’ve reached Goodwood station. We can talk in the car.”

“Candice, won’t you check how many views our last prank on YouTube received? Will you do that for me?”

Candice takes her phone from her bag, looking out the window. We drive past trains blackened by fire. Beggars wander around with backpacks, collecting cans. I need to change the train track of my life. Drastically. The taxi and train tariffs go up every year, but the pay stays the same. No-one is going to change my mind.

Candice laughs as she looks at her phone screen.

“Why are you laughing?” I ask.

“I’m watching the video we posted on YouTube,” she grins. “People on YouTube say you should have slapped that man, the one who pressed you up against the tree.”

“It was a prank,” I say. “That kind of thing happens.” I sit down next to her. “How many views did the video get?”

“The subscribers are still the same.”

“You see what I’m saying, Candice? A lot of people watch the video, but they don’t subscribe.”

She looks up at me. “Don’t look so miserable. People are watching it, that’s great.”

“I’ll tell you what’s great. Great is when one of our videos go viral. It hasn’t happened yet. Until that happens, I won’t be satisfied.”

We get out at Goodwood station and walk to the car. The car is always safe close to GrandWest – lots of security around. Candice gives me the car keys and I unlock the car. We drive through Ruyterwacht and past Elsie’s River police station.

“Remember Ballas, that gangster in Delft? We’re going to watch his house, for two days or so. We’ll check how many people there are, their movements. Then we do the prank when the big guns are away.”

Candice bites her lip. “I don’t know what to say to you Lee-Roy. You’re not listening to me anyway.”

We watch Ballas’ house for three days. It’s only Ballas and two of his guys most of the time, and an older woman.

Four days later, we get home just after five. Deon isn’t there; that’s in our favour. The last thing I need is to have him wandering around. I have to get to his room because I need one of his uniforms. I put our bags down, while Candice goes to make us some coffee. I walk to Deon’s door and twist the handle. It’s locked.

“How will you get the uniform, now?” Candice walks up with two cups of coffee in her hands. “Lee-Roy, it’s better this way. It’s meant to be. We shouldn’t do this. Listen to me.”

I take a cup of coffee from her. “The door is locked because Deon took his room key with him to work.”

“Are you going to wait until he comes home?”

“Never! He’ll say no … We’re just going to borrow the uniform. It’s not stealing. I’ll just use it for half an hour and then I’ll bring it back. Not a speck of dust on it.”

I walk out the back door to check out Deon’s bedroom window. Feel around the frame to see if I can get it open, but it’s closed tightly. I go to the kitchen to get a screwdriver from under the kitchen sink. I’m going to get into Deon’s room today, no matter what. He’ll be angry, but he’ll just have to forgive me. Desperate times calls for desperate measures! I struggle with the window, but it won’t open.

Candice peers around the backdoor. “You’ll break the window, Lee-Roy!”

I walk past her and she makes way.

I try the bedroom door again. “Bloody hell!” I say and step back. Then I lift my right foot high and kick. The door shudders in its frame.

“What are you doing?” Candice yelps.

I kick twice more with all the power in my right leg. Something cracks and the door bursts open. I’ll have to fix the lock, but Deon’s door is open.

I look back at Candice. “That wasn’t so difficult, was it?” I ask. “Now I’ll get the uniform. The next step is Ballas’ house. Let’s hope I make it out alive!”

Tell us: What do you think about Lee-Roy’s actions? Do you think the ends justifies the means?

< previousintronext >
Login to Comment
12 Responses
Bad..no
Zimkita Kwanini · 3 days ago
I'm starting to get worried now this guy is so starbon n reckless
Luyanda Mbulawa · 5 days ago
Lee-Roy is crazy 😧
Letlhogonolo Kotsedi · 5 days ago
He's desperate for subscribers on YouTube since he is a YouTuber
Nombuso Blose · 6 days ago
He is too stubborn to listen to his girlfriend!!
Anele Nyanti · 6 days ago
Load More
Go to Library