My Name is Petronella 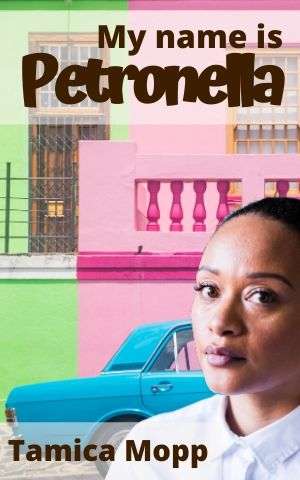 Marley always smiled at me. He had the most amazing smile with the sweetest eyes. I would melt each time I saw it. Gosh, I can’t explain the way my tummy would start spinning, butterflies indeed! Butterflies like a little girl on Christmas day expecting the gift she’s been asking for all year, only to find nothing under the tree. That was exactly what Marley was to me, empty promises and lost hope. I’m not ready to fall in love again, especially since the last man I loved broke me. He broke me to the core. I’m thirty five years old with a broken heart and two kids. Who would want me? Certainly not Jonathan.

“Askies? You can make your own food.”

I don’t know where he gets these rude manners from. In my day, there was nothing of, “Ma, I’m hungry.” Maybe a klap against the head, ja, but no demands for food. I’m sommer angry now!

My name is Petronella Adams. I am thirty five years old, I live in the Bo-Kaap with my two children.

Angelo is fourteen this year and Kian is only three. Kian and Angelo don’t have the same father. Angelo’s pa passed on when the boy was only five years old. A skollie vannie Kaap, a gangster from Cape Town. He was shot, ruthlessly killed and heartlessly forgotten by the system, but not by me, and not by those who knew him beyond the gang facade. We almost got married, but I told him he needed to change his life around before marrying me. He told me that he wanted to, he looked at Angelo and he said he couldn’t let his child grow up with a skollie as a father. But a few hours later, he was shot. It’s sad how life goes sometimes.

Some years later I learned to love again. When Angelo was ten, I fell in love with my best friend, Marley. He was a good man. Yes, I said was. Because he isn’t good anymore. He got me pregnant and then he left. He left innocent Kian. Kian has his eyes, his hair and yes, even his smile.

“That’s not my child,” was all he told me, nogals on WhatsApp.

“Who else Marley? I only got bymekaar with you!” was my response, but the message never went through. He blocked me.

I see now that Marley only wanted a good thing. Two years of my life wasted. Angelo never liked him. I guess trust your kids when they tell you they don’t like your partner. They are not being funny, they are sometimes life’s greatest advisors.

Where is Marley now? He’s sitting in Durban with a young kin, another girl. Shame, I pray she’ll tjaila soon, before he gives her a child and then leaves her for the next girl with long, pretty hair. Unlike me, as he always said.

I give him his pap and also make a sandwich for Angelo, just this one time. The kids are my life. But I won’t lie, I need a man to love the children. And maybe also a man who will give me some love.

I have someone in mind, but like I said, who would want to date someone like me, a thirty-five-year-old single mom without a stable job? Certainly not Jonathan Michal Adriaans.

Tell us: Do you think Petronella with ever find another man to love?

< previousintronext >
Login to Comment
70 Responses
Yes when the time is right
Reabetsoe Moloi · 4 weeks ago
Yeah
In my life matomane · a month ago
Yes I think she will.
Milly@m · 8 months ago
Definitely yes she will
Mee · 8 months ago
Yes
Evah Thembi · 8 months ago
Load More
Go to Library