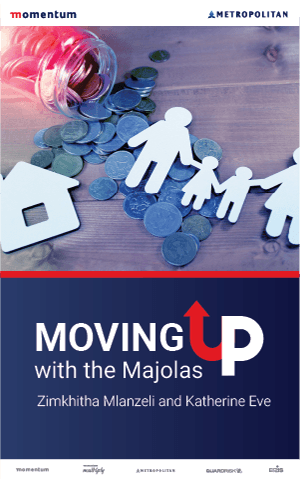 Have you ever found yourself in a position where everything seems to be going wrong? You owe money and you can’t find a way of paying it back? Being in debt is a frightening thing. The consequences of not being able to pay it off is best avoided, especially if you owe money to a loan shark! Do you know that companies can have you blacklisted if you don’t pay your debts?

Baba is in a very difficult situation. He’s lost his wife, he’s in debt and now he’s had an accident which will impact on his ability to work and earn money!

Luckily for Baba, he has a good friend in Ma Ruby. Ma Ruby suggests that Baba becomes a member of a stokvel. She is part of a stokvel and she offers to help Baba out with his loan. Even if you are not in a crisis situation such as Baba’s, it sometimes helps to save money in a group of people. Trying to save money on your own can be very difficult. It requires a lot of personal discipline to put money aside whereas saving with others can be easier.

Stokvels usually have between 5 to 30 members who contribute an agreed amount of money monthly. Then, at the end of the year (or whenever the group decides), the stokvel shares the savings with their members, or collectively buy items that will be shared by the members. If the money is only being distributed once a year, it can be held in a bank account. By doing this, the stokvel members can earn a significant amount of interest on their money.

‘There are over 820,000 stokvels in South Africa with a combined membership of 11.4 million people. They handle over R44 billion per annum! In other words, there are a huge number of people saving money in many different stokvels and they are being paid out regularly. This seems to be a successful way for many South Africans to save money. More and more financial institutions are offering stokvel savings accounts. It’s possible to earn 7.15% interest on R1,000 or 7.45% on R 10,000 invested in a good stokvel bank account. This is higher than you would earn for money invested in an individual savings account.

What are the advantages of investing in a stokvel?
• Some stokvels help out with funerals and, as well as providing money for the funeral, offer compassionate support to the family who has lost a loved one.
• Some financial institutions offer funeral cover up to R10,000 for a small monthly contribution from each member of a stokvel.
• Someone who can’t get a formal loan from a bank may be able to take a loan from a stokvel.
• Members of a stokvel have regular meetings and this is an opportunity for people to socialise. Stokvels are often family- and community-based.
• The rules of a stokvel can easily be changed so that a member can receive money in a time of need.
• Each member of the stokvel has a say in the rules of the stokvel.
• A stokvel can stand surety (take responsibility) for a member at a financial institution, if a member wants to take out a loan.
• When a new person applies to join a stokvel, the person’s character is considered rather than their financial security.

Of course, there are some disadvantages to stokvels too. Here are some of them:
• You need to trust the members of the stokvel.
• Any fighting between members can create difficulties.
• Stokvels rely on compulsory regular payments so if you miss one, you may not get the monthly pay out.
• If you are part of a large stokvel there may be lengthy periods when you do not receive a payment.
• Funeral pay-outs may not cover the costs of the burial.
• If the stokvel money isn’t placed in an account at a financial institution, you will not get any interest on the money.
• It can be dangerous for stokvel members to carry large amounts of cash as they could be attacked and robbed, particularly if it is known that it is their turn to be paid out or they are about to make a big contribution. It would be safer if money can be deposited into members’ accounts electronically.
• No legal protection is given to a stokvel or its members.

Interestingly, most members of stokvels are women. However, it is also a helpful way for men to develop the discipline of saving money.

We can see that Baba is very lucky to have a friend like Ma Ruby because, with the help of her stokvel, she can help him out in a time of need. Baba also has the opportunity to become a member of a stokvel to help with his future savings.

Does this mean that saving through a stokvel is better than saving or investing as an individual at a financial institution?

While stokvels are a useful, informal way to save money, they do have limitations. The main problem is that the amount and type of saving and loan facilities that can be taken through the stokvel can be limited. This means that formal savings and investment institutions are preferable in some instances particularly if they can meet your specific needs for saving towards your long-term goals. Financial institutions offer their customers a wide range of financial services and advice, which is useful for long-term financial stability and growth.

In the short term, Baba has managed to find a solution to paying back the loan shark. Perhaps he should have approached a stokvel for a loan right at the beginning, rather than borrow from a loan shark if he couldn’t get one from a financial institution!

Interested in stokvels? Read some research about them here.

The next chapter will be released on Thursday, 17 October. Return then to complete stage 5 of the competition!!

Disclaimer: The calculations and case studies in this publication are produced for illustration, informational and educational purposes only. The calculations should not be considered as financial or legal advice. Neither the FunDza Literacy Trust nor Momentum Metropolitan Foundation (NPC), nor any of its affiliated entities, guarantee the accuracy of the calculations or case studies. Neither the FunDza Literacy Trust nor Momentum Metropolitan Foundation (NPC), or any of its affiliated entities, accept any responsibility for any losses or damages resulting from reliance upon the calculations or applying the case studies. It is advisable to always seek professional advice from a reputable financial advisor when dealing with financial matters.
Login to Comment
43 Responses
Stokvel can be very helpful.
swavesteven · 7 months ago
It so helpfull iksi scheme
Gidela · 8 months ago
Wow a kasi saving scheme can be so helpful I didn't know thank you.
Annakay · 8 months ago
I see agree that stokvel not only helps with discipline but also can be a good support and encourages patience in savings.
Lebogangmo · 9 months ago
Saving money is bit difficult especially on your own but by doing it with a group of people it's easy .stockve st are the best.
Ke'Malume · a year ago
Load More
Go to Library