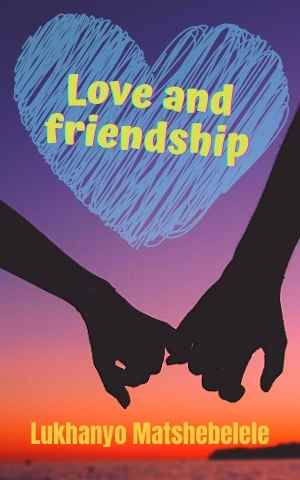 I only met Sima this year, in our Matric year.

My mother and I haven’t always lived in East London. We moved here so that she could be closer to work. My mother also wanted me to do Grade 12 at a school that had much better resources than the one I attended in Qoboqobo.

I was early on my first day at my new school and when the learners chose their seats, I chose the back seat. My chair was against the window, I could see people and cars outside. The learners there were so different from my previous school – from the way they wore their uniforms to the way they spoke. I didn’t talk much because I was afraid they’d make fun of my rural slang.

Learners walked into the class in pairs and small groups, talking about how their December holidays. All the seats were taken except for the second chair at my desk.

“Sorry, Mr Jubana, for being late,” said a boy who walked in after the bell had rung.

“Xolani, don’t tell me you are always going to be late for school again this year,” Mr Jubana said with annoyance in his voice.

“No, sir. This won’t happen again,” Xolani said, brushing the back of his cleanly shaved head with his hand.

“Hey, Chief,” Xolani greeted me as he pulled the chair next to me from the desk.

The teacher clapped his hands three times to get the attention of the class. We stopped talking and listened to the teacher.

“Molweni, bantwana bam’. The December holiday is over now and we are back to school. Anyways, why don’t you clap for yourselves for having made it to Grade 12?” Mr Jubana said. We clapped our hands and others even whistled. The teacher signalled with his hand for us to stop.

“I don’t know if you have noticed but we have a new learner in our class. He will tell us who he is and what he wants to study at university next year,” the teacher said.

I stood up shyly. “Hi everyone, my name is Ayanda and I want to study Linguistics.”

I was already sitting down by the time the class clapped. The teacher ordered everyone to introduce themselves to me. I felt welcomed at my new school as I listened to other learners introducing themselves.

In the days that followed, Xolani and I grew closer. I would help him when he was struggling with his school work and he helped me with the East London slang and trends.

One day during lunch break, Xolani and I were talking, leaning against the school wall.

“Hey Chief when I talk to you about girls you don’t say much. Do you even have a girlfriend?” Xolani asked.

“Are you being serious, Chief? How about eQoboqobo? Don’t you have a girlfriend there?” Xolani asked.

“We broke up. Who is that girl?” I asked Xolani. My attention was on a girl who was walking to the school tuckshop with her talkative friend.

I could swear I saw Xolani’s face expression change but he quickly drew his smile back.

“She’s Simamkele but she prefers Sima. They are doing science subjects in Grade 12a,” Xolani said, not showing the same enthusiasm he had shown when he thought I was talking about Anathi.

My eyes were on Sima as she walked to the shop with her friend. My heart was pounding; it was unusual for me to feel this way about the girl I hadn’t even spoken with.

Tell us: What do you think of Xolani, is he a good friend?

< previousintronext >
Login to Comment
200 Responses
Nop
Kidwill · 2 months ago
Go for it ma man🤘🤘🔥
TUPAC Shakur · 2 months ago
Well a little bit.
Lili9 · 2 months ago
Not a good friend because of trust.
Mmkg · 2 months ago
Xolani is not a bad friend, but he also has feelings for Sima
Mgood · 3 months ago
Load More
Go to Library