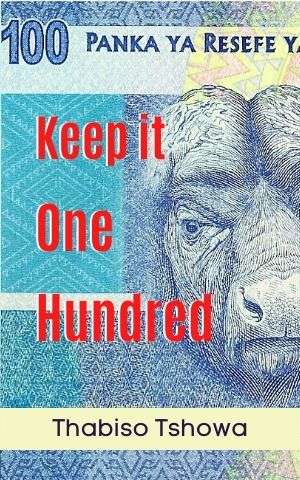 They say “money rules the world” – I know you’ve probably heard that phrase before. Money is the root of all evil, blessings, murders and much else. Here lies a tale of a one-hundred-rand bill. We don’t think much about the money we carry in our pockets, especially now, in times of a pandemic. But we really should think about the money that exchanges hands on a daily basis.

This is a tale of two cities or perhaps a town and a township to be more accurate … and how a R100 bill travelled all over from Springs to Geluksdal. Our story begins with Aunty Lisa, a hard-working woman from Tsakane.

Aunty Lisa worked hard to provide for her son, Don, who was only eight years old. She had been on her own since the age of 13, so she knew how to take care of herself and her finances. No-one had been around to teach her those things, she had to learn them the old-fashioned way, the hard way. She wanted a different fate for her son.

She lived with her son and her nephew, Fido, in Geluksdal, a well-known and upcoming neighbourhood in the heart of Tsakane. They stayed in a white eight-room corner house with bulletproof windows – because Aunty Lisa didn’t want to take any chances when it came to the safety of her son.

The house had belonged to Uncle Lucas, Fido’s stepfather. He was a well-known bricklayer from Tsakane and he was married to Fido’s mother who worked at Isothermal, where she met Aunty Lisa and took her under her wing. Their bond grew and Fido’s mother invited Aunty Lisa and Don to come stay with them in Geluksdal.

Don’s Pappa, Donovan, would sometimes come and stay over when he and Aunty Lisa weren’t yelling or fighting. The fights were more verbal and psychological than physical.

The fighting first started after Fido had spotted Don’s father, Donovan, flirting with another woman and Fido had told on him. It was not long before Aunty Lisa kicked Donovan out on the curb. Donovan had moved out, but would sometimes come over to spend time with his son and “his woman”.

Every morning he woke up after spending the night over, Donovan would complain about someone going through his pants while he was asleep, “Okay! … what the hell happened here?” he would shout while frantically going through his pockets. “I could swear I had more bills on me than I have right now! My money is missing! I want my money!”

Aunty Lisa would snap. “If you want to call me a low-life ho who goes through men’s pants while they sleep, then come out straight and say it right to my face!” she would scream at the top of her lungs.

What they didn’t know was that Fido occasionally dipped into his aunt’s purse when she wasn’t looking or when he needed money for airtime, cigarettes or even a blunt. Fido did a lot of things that some might frown upon, but you couldn’t tell by the mesmerizing smile on his face and the contagious laugh that followed. He made up for the ill deeds he did by being there for Aunty Lisa and Don whenever they needed him. Fido was a troubled youth, yet he fought with all his might to protect Aunty Lisa and Don from shame and disappointment. Aunty Lisa treated him like her own son and he had a soft spot for them.

Aunty Lisa put in many hours at work. She worked at Isothermal, a factory in Springs. Aunty Lisa loved her job, she even worked overtime so she had money to spare to treat her son to whatever his growing heart might desire.

This Friday was different, because Aunty Lisa had gotten a promotion from her boss and today was payday. He had called her to his office some time earlier and told her the news. When she had thanked him, he had shaken his head. “Lisa, you deserve this promotion because you work harder than most people at the factory. You’re always employee of the week! You truly deserve it,” he had said.

Now, Aunty Lisa moved with a rhythm as she walked up and down the factory floor, while taking an occasional glimpse at her wrist watch. For once, she was counting down the minutes. She wanted to celebrate after work and had thought of a trip to Pingo, her sister’s favourite restaurant, where they served big pieces of fried chicken, ice-cold drinks and all the fries you could eat. Whenever Aunty Lisa bought fried chicken from Pingo, she also bought ice cream for her and the kids.

Aunty Lisa smiled as she thought about her sister, Violet, who had introduced her to this work. Violet now lived in Bethal, running her own restaurant. “I love you sis,” she said under her breath as she walked. The air in the factory was hot and there was the noise of machines all around.

She was authorised to move everywhere on the floor of the factory when duty required. She walked towards the huge refinery and the treatment station, where her work buddy Aisha was stationed. “How’s Don Junior?” asked Aisha, looking up from her work.

Aisha gave a smile and a wink. “I bet he’ll be pulling birds in no time!” Aunty Lisa giggled and turned to her watch. Then she recalled that time always seemed to be moving slower when you kept checking it.

“A watched pot never boils,” she said under her breath and forced her attention away.

She worked at the same pace and in the same spirit until quitting time. Then she left work and caught a taxi to Springs. She would first pay the bills and do some shopping, then head to Pingo.

Tell us: What do you think about Fido telling Aunty Lisa when he saw Donovan cheating on her?

< previousintronext >
Login to Comment
47 Responses
Good boy
Gemini88 · 2 weeks ago
I think he loves his Aunt alot therefore he told her what he saw .
Cutie · a month ago
It's none of his business. He should have looked the other way like a good child.
Mtibza eM · 3 months ago
I think he did the rite thing he is just looking out 4 his aunt
Leeah govender · 3 months ago
Fido cares about Aunty Lisa.
Sihle · 3 months ago
Load More
Go to Library