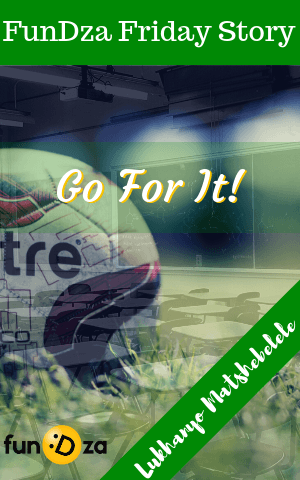 “Now listen for your name and come up and fetch your script,” Mrs Kholi said. “Xola Ngubezulu!”

Analo felt a lump in her throat. She froze and looked around the classroom, not sure if she had heard Mrs Kholi correctly.

The class laughed and clapped hands as Analo came to the front. “Congratulations! Analo got third place!” she heard one of the learners comment sarcastically.

“Keep quiet! You are making a noise,” Mrs Kholi said to the class. She looked at Analo. “Analo nyusa iikawusi, sisi. This is not acceptable,” she said as she handed Analo back her script.

Analo returned to her seat holding tears back. Lilitha tried to see her mark as her friend hurriedly put the script inside a plastic sleeve.

“What mark did you get?” Lilitha whispered.

“Bad enough to get third place after Xolani and Vuyani,” Analo replied. She was hurt. Coming next after Xolani and Vuyani was a blow to her. Those boys were gang members and rarely attended school. Everyone knew they would be expelled soon. Analo, on the other hand had never missed a single Natural Science class, yet she had done so badly.

“Xolile Rali!” Mrs Kholi went on. She called out everyone except Lilitha.

“Now class. The highest is–” Mrs Kholi said, picking up the script from her desk.

“–Lilitha Bobothwana!” Mrs Kholi continued. She walked over to Lilitha and put the script on her desk. “Congratulations, mntwan’am. Keep it up. Those who got less than 30 for the test must remain in class after school on Tuesday.”

Analo glanced at Lilitha’s test script. She had scored 60 out 75.

When Analo got home she felt like hiding herself away forever. She knew her mother would find out if she failed that term. She threw her schoolbag on the bed and lay down, covering her head with the pillow to shut out the light.

“How was school, mtwan’am?” Nomalizo asked from the doorway. Analo moved the pillow and squinted into the light.

“It was bad Mama. I failed my chemistry test,” she cried. She might as well tell her mother now and get it over with.

“That is bad. But you can’t give up. You can always improve if you work harder. Remember: you need to understand chemistry and physics to become a chemical engineer.” Then her tone softened. “We have faith in you my child. You will do well.”

“But Mama, I got 15 out of 75 for my test. How can I become an engineer with the marks I get? Maybe I should change and just do Life Sciences next year,” Analo said, sitting up. She was in Grade 9 and next year she needed to choose what she would do for Matric.

Nomalizo sat next to her. “That is not an option. My friend’s child attends an after-school Maths and Science programme at your school. Her mother says she is doing well. You must find out about it and attend those classes too.”

Analo could just imagine her mother and the friend comparing their children’s marks and it made her stressed and angry.

Tell us: Is Analo’s mother right to push her to do Natural Sciences for Matric? Why/Why not?

< previousintronext >
Login to Comment
32 Responses
No.The choice must be made by Analo because she knows better which subject she enjoys and is good at.Although she should choose the subjects that she's gonna need to enroll in her course.
Dephney25 · 3 months ago
She is not right to force her. It might happen chemistry is not her best subject as compared to life science. Though as she said in chapter one that her teacher just reads and doesn't explain it might be the teacher's problem
INNO4CHI · 8 months ago
its not right because analo must do what suits her and. what she really understand
palesa mahlaole · 11 months ago
xolisaH
XolisaRKweF · 12 months ago
Yes she is right, this will open her mind for easy science understanding
Hastingsmary · a year ago
i think it'z not right. she should really let her do what suit her and easy to understand for her.
muzzammil lawal · a year ago
yes her mother is right because she wants analo not to accept that she is a failure in chemistry
chriss225 · a year ago
no her mom is wrong...analo she's the one who's at school so she has to choose by her self because at last it's her future.
mpho gift · a year ago
No....if Analo feels that the subject it is difficult for her then it is okay to quit without anyone's permission...it is her future after all
Mkwanazi · a year ago
No Analog should choose for herself as to which subjects she wants otherwise she will fail miserably
Prince X_female · a year ago
Load More
Go to Library