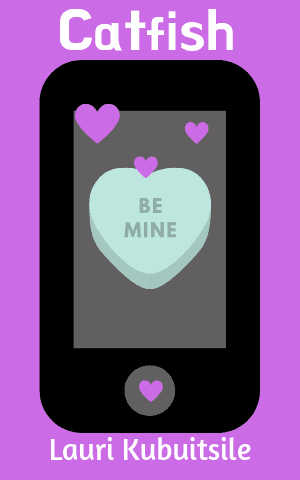 “Nothing,” Leila said. But then, maybe it was the alcohol which suddenly arrived in her brain, or maybe just her happiness at having someone as lovely as Hardy in her life, but she, unfortunately, continued, lowering her voice to a whisper. “I was reading a text from my boyfriend.”

“You have a boyfriend, Leila? That’s great. How long have you been dating?” Mphoentle asked.

“Two months. His name is Hardy Miller.” Leila could not believe she had said that out loud to another human being.

“Two months and he’s never come by the library?” she asked.

“In London? Wow! How did you meet?” Mphoentle asked.

“What do you mean?” Mphoentle looked confused.

“I mean we haven’t really met yet. I mean … I met him online. I met him on one of these dating sites.”

“What? That’s crazy,” Mphoentle said. “How do you even know he’s telling the truth? Leila, you need to be very careful. There are people out there just looking for people exactly like you. They’re called ‘catfish’. He might have lots of girls he’s talking to. He might even be married or not even a boy. I’ve heard so many terrible stories.”

Leila regretted telling her now. She wished she could take the words back. Mphoentle was talking about other people – not Hardy. He wasn’t like that at all.

Leila knew she shouldn’t have said anything, not even to Mphoentle. She needed to leave; she needed to be home. She suddenly felt scared and uncertain. She wished she could take her secret back and keep it safe in her heart where it had lived for these two months, making her happier than she’d ever been before.

She suddenly stood up. The chair scraped and the group looked her way “I forgot … I need to go … I’ve got a … my mother is ill.”

Alletta looked at her. “You forgot your mother was ill?”

“No, I mean my mother texted to say she was ill … I need to go,” Leila said, picking up her handbag and heading toward the door.

She heard Dikeledi behind her: “But you didn’t even have any birthday cake!”

Tell us: Do you think Hardy is real or a ‘catfish’?

< previousintronext >
Login to Comment
38 Responses
For now we don't know but predicting from past events, there are high chances that Mphoentle's suspicions Might be right and find that this Hardy is a fake Weirdo. We can never be sure but let's give this Hardy a benefit of a doubt but also wearing big goggles to detect any suspicions he May say.
Mtibza eM · 4 months ago
I woudnt knw.maybe ,maybe nt
Lekeata · 5 months ago
His gona buy her a cake or take her out in a date
Sieda · 5 months ago
Yea he do
Sieda · 5 months ago
Catfish
Sarikie · 5 months ago
Load More
Go to Library