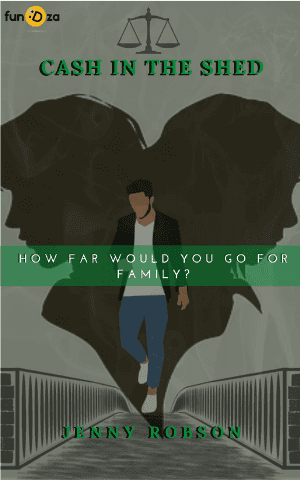 From the first box, I unwrapped a teapot with three matching cups and five matching saucers.  I held them up. Mr Dordrecht gave them a cursory glance.

“Common as muck!” he declared. “From the 1940s; factory-made and mass-produced.”

He said almost the same thing about an old lantern, a moth-eaten teddy bear, a large ornament of a tiger that Claudette uncovered. The shine in my sister’s eyes was dulling. She was becoming irritable, impatient.

“Oh for heaven’s sake, Faheema!” she yelled at me. “Stop fussing with that lot! We don’t have all day. Mr Dordrecht is a busy man! Pull that orange crate out. I reckon some of my great grandmother’s stuff is there.”

I had been smoothing out the pages of newspaper, putting them in a careful pile on the kitchen doorstep. Thinking all the while how, so many years ago, Mom’s hands or Ouma Plaatjies’ hands or even Ouma Plaatjies’ mother’s hands had touched these same pages. But I went across to the orange crate as instructed.

And then Claudette dropped her bombshell. Well, it was a bombshell for Mr Dordrecht.

“Damn. Where are those paintings? I remember Ouma talking about them. Pierneef? Some such name? She cleaned house for his nephew or something.”

Mr Dordrecht’s gasp was audible. It sent the cobwebs swaying around the doorway.

“Great heavens! Jacobus Hendrik Pierneef!? South African landscape artist? Let me tell you, Ms July. If you have a Pierneef or two here, we are talking a small fortune! A few years back, one of his paintings sold for over 11 million rand.”

I helped willingly in the search. A small fortune would make my sister very happy indeed. And I wouldn’t begrudge her that. After all, she had shared her parents with me. She had shared the cramped space of her childhood home. Not always willingly, true. But what did that matter?

And I was the one who eventually located the paintings, halfway through the second day. Under a coir cot mattress, lying flat on the gritty floor and unimposing, wrapped in thick wads of newspaper. There were three of them.

Carefully, I unwrapped each one, not wanting to tear the newspaper even if it was tatty and yellow with age.

“Bingo!” shrieked Claudette. “So come on, Mr D! How much? Do I sell them all together? Or will I get more separately?”

Mr Dordrecht grimaced. He definitely didn’t enjoy being referred to as ‘Mr D’. He stood the three paintings up against the fence, in the sunshine, side by side.

One was of a huge baobab tree with another baobab in the distance. One showed a row of orange houses along a dusty street. The last one was of a mountain with strangely-shaped clouds behind it. They didn’t look appealing to me – but I don’t know anything about art. Not like Mr Dordrecht.

From his pocket, he brought out a magnifying glass. He knelt beside the paintings, looking them over carefully. One by one.

“Hmmmm,” he said. Several times. Whilst my sister held my hand tightly, her nails digging into my flesh. She was breathing in quick, impatient gasps.

Tell us: What do you think of someone paying 11 million for a painting?

< previousintronext >
Login to Comment
6 Responses
don't think that's possible
irony · a year ago
Maybe they are worth that amount, however, we'll never measure a man's greed. Referring to Mr D of cause.
Inathikosivee · a year ago
Yes some paints are wealthy that amount
Chichi83 · a year ago
Meaning it is scarce and myb you can't find it anywhere near
Ribery · a year ago
Possible if its a rare find ..a relic
SHABEER MAHOMED · a year ago
Load More
Go to Library