A Trail of Dust 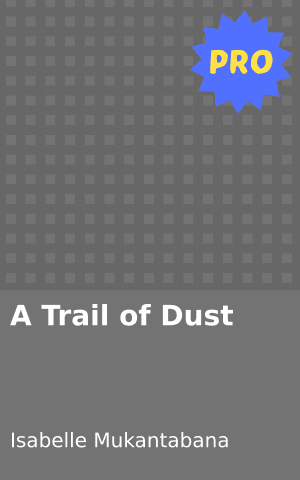 “Either you pay, or we send you back to Rwanda,” the official said as we stood in the customs building in Kigoma, Tanzania.

We stared at him. I burst into tears. We had come so far, for this? I turned to Philippe. He always knew what to do. But now all I could see was fear in his eyes.

And then an elderly man walked towards us. He was well dressed and he was smiling. That smile made him look like an angel to me.

“Hello. Can I help you? What is going on here?”

I wanted to cry when I heard these words coming from him as he greeted us in Kirundi, so close to my mother tongue. A language I could understand.

“The officials won’t give us papers. They want to send us back to Rwanda. We can’t go back. We will be killed,” Philippe told him quickly.

Then the man was talking fast and in a low tone to the officials. His voice sounded urgent but firm. I saw him taking out a wad of money and stripping some notes from it, and handing them over.

We were issued with visas for two months. This man was an angel. He had saved our lives. But he wasn’t finished with us yet.

“My name is Issa. Come with me. I will take you to my place.”

His car was a brand new BMW. Sitting in the soft and spotless car seats seemed so unreal. It was a very special treat for us. I felt human again.

He had a big house with many rooms. In the evening I took a shower. I felt relieved as I let the hot water run, washing off all the dust gathered on me during the long journey. I did not want to close the tap.

I felt like I was in paradise. His wife gave us food: delicious smelling rice, meat and vegetables. I felt like a queen – and that my brothers were small kings.

The next day, Issa told us that instead of going to spend money in a guest house, money we didn’t have, we could stay with them but we would have to buy and cook our own food. They would lend us pots. I wanted to hug him as he said these words, but I was too shy in the company of his wife.

That evening I heard a knock on my door. I was enjoying the luxurious feeling of lying on a soft bed after the nights in trees and on the ground, scared of animals attacking us. My brothers were out buying some food.

The door opened a crack and Louis peered around. I beckoned him in. He sat on the edge of my bed and took my hand. We chatted, about the journey and our hopes. I told him how much I missed home and my father and mother and sister.

“Do you think I am too much of a dreamer? I still think I will study one day to become a nurse,” I told him.

“It will come true,” he said. But we both secretly wondered if we would survive this journey to even have a future. “I wish I also had so much faith in my future,” he said, squeezing my hand.

The next morning we were all out in the market place when a uniformed official stopped us.

“Where are you from?” he asked roughly. It was going to be difficult to lie. The language and accent would betray us. My heart was beating like a drum.

“And why are you here? You are supposed to be in a camp.”

“We have visas.” André showed his paper.

“I don’t care about visas. You go to the camp or back to Rwanda. Else, jail is waiting for you.”

“But…” began André. He was cut short.

André searched in his pocket, took out some money and shoved it in the official’s hand. The man smiled.

“How much did you give him?” I asked André after the official had left.

On our way back from the market, another official, this time a bit older, stopped us. He said the exact same things and Philippe had to hand over some more money.

“We have to leave here,” Philippe said as we ran back to the house where we were staying. “Or we will be put in jail.” The bribe money was running out.

“You’re right,” we all agreed.

The next day we had to take another ship to Mpulungu in Zambia, on the shores of Lake Tanganyika.

I thought we had reached freedom, and I wanted to shout for joy. Then I heard the words that made me feel like giving up on my dreams, there and then.

“Go back to Tanzania or Burundi,” the immigration official said.

“We can’t go there. We are running for our safety,” André said quickly. I was trying not to cry. All this way, only to be turned back.

The officials talked amongst themselves. Then one of them turned to André. If you pay us money, you can go through, he said. They told us to go to Lusaka to the UNHCR. We did that, and the woman there sent us straight to another refugee camp. My heart sank.

In a camp, people survive, they don’t live, I thought.

“It looks like we are doomed to misery, trapped in its claws,” André said.

One drizzling morning, Louis found me sitting alone on the edge of the camp, crying, staring out into the bush. He took my hand, helped me up and led me back into the camp.

“At least we have each other. We will survive the storms.” A big smile and a squeeze of my hand accompanied these sweet words. Now, it was Louis giving me hope.

Tell us what you think: What are the dangers of a journey like Odette’s? Will she find a place where she can live and study to become a nurse?

< previousintronext >
Login to Comment
15 Responses
ey it's very hard 4 them shym back 2 squer 1 its very hard to other countries
mamiza · 4 years ago
It promises to be a wandering journey forever with nowhere to call home hence shattering all the dreams
Daddy A Divine · 6 years ago
"At least we have each other we will survive the storms" so said Louis
._+++++++++_.- · 9 years ago
Shame shame 2 thm unbelievable hw we fall easily and pick ourself up.
temgkosi · 9 years ago
I wish i had a jeny lyk dat,i also lyk 2 experiance adventure jerny lyk dis8-)2 brave 2 quit8-)
C-Maypro · 9 years ago
Load More
Go to Library