Tselane and the Giant (English) 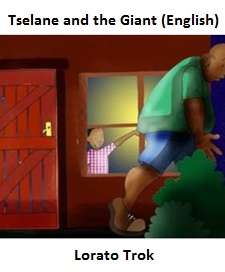 A little later in the morning, Tselane’s mother came as usual to bring her daughter food.
She sang her song, but Tselane did not come out.
She sang her song again, but still Tselane did not come out.
After singing for the third time, she kicked the door open. Tselane was nowhere to be found.
She knew what had happened, and she quickly thought of a plan.