Together We're Strong: The Story of Albertina Sisulu 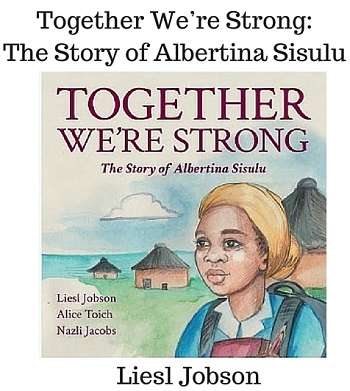 The test began. Albertina’s fingers shook. The sums were tricky. Her mouth went dry. Her hand cramped on her pencil but she continued. “Well done, Albertina!” said her teacher at the end. The important official arrived and called the top two students to the stage. “Well done to Albertina for full marks,” he said, “but you are too old. The scholarship goes to…”

Albertina tried not to cry. “That’s unfair,” shouted Betty, hopping with fury. “That wasn’t in the rules!” How would Albertina go to high school now? She dragged her feet all the way home.

The teacher wrote to the newspaper about the unfair decision. Brother Joe at the Catholic Mission station read the story over his breakfast. He cracked his boiled egg with an extra flourish. He pushed the newspaper across the table to Father Bernard. He didn’t like the story one bit either.