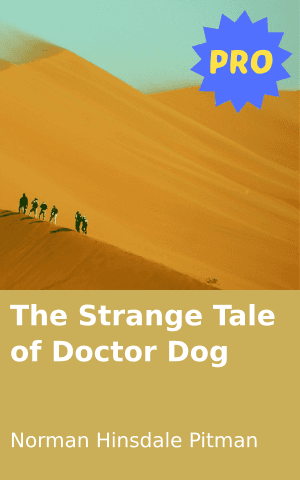 As Mr. Min sat thus overcome with grief, he was startled at hearing a low whine. Looking up he saw, to his astonishment, a shaggy mountain dog about the size of a Newfoundland. The huge beast looked into the old man’s eyes with so intelligent and human an expression, with such a sad and wistful gaze, that the greybeard addressed him, saying, “Why have you come? To cure my daughter?”

The dog replied with three short barks, wagging his tail vigorously and turning toward the half-opened door that led into the room where the girl lay.

By this time, willing to try any chance whatever of reviving his daughter, Mr. Min bade the animal follow him into Honeysuckle’s apartment. Placing his forepaws upon the side of her bed, the dog looked long and steadily at the wasted form before him and held his ear intently for a moment over the maiden’s heart. Then, with a slight cough he deposited from his mouth into her outstretched hand, a tiny stone. Touching her wrist with his right paw, he motioned to her to swallow the stone.

“Yes, my dear, obey him,” counselled her father, as she turned to him inquiringly, “for good Dr. Dog has been sent to your bedside by the mountain fairies, who have heard of your illness and who wish to invite you back to life again.”

Without further delay the sick girl, who was by this time almost burned away by the fever, raised her hand to her lips and swallowed the tiny charm. Wonder of wonders! No sooner had it passed her lips than a miracle occurred. The red flush passed away from her face, the pulse resumed its normal beat, the pains departed from her body, and she arose from the bed well and smiling.

Flinging her arms about her father’s neck, she cried out in joy, “Oh, I am well again; well and happy; thanks to the medicine of the good physician.”

The noble dog barked three times, wild with delight at hearing these tearful words of gratitude, bowed low, and put his nose in Honeysuckle’s outstretched hand.

Mr. Min, greatly moved by his daughter’s magical recovery, turned to the strange physician, saying, “Noble Sir, were it not for the form you have taken, for some unknown reason, I would willingly give four times the sum in silver that I promised for the cure of the girl, into your possession. As it is, I suppose you have no use for silver, but remember that so long as we live, whatever we have is yours for the asking, and I beg of you to prolong your visit, to make this the home of your old age—in short, remain here for ever as my guest—nay, as a member of my family.”

The dog barked thrice, as if in assent. From that day he was treated as an equal by father and daughter. The many servants were commanded to obey his slightest whim, to serve him with the most expensive food on the market, to spare no expense in making him the happiest and best-fed dog in all the world. Day after day he ran at Honeysuckle’s side as she gathered flowers in her garden, lay down before her door when she was resting, guarded her Sedan chair when she was carried by servants into the city. In short, they were constant companions; a stranger would have thought they had been friends from childhood.

One day, however, just as they were returning from a journey outside her father’s compound, at the very instant when Honeysuckle was alighting from her chair, without a moment’s warning, the huge animal dashed past the attendants, seized his beautiful mistress in his mouth, and before anyone could stop him, bore her off to the mountains. By the time the alarm was sounded, darkness had fallen over the valley and as the night was cloudy no trace could be found of the dog and his fair burden.

Once more the frantic father left no stone unturned to save his daughter. Huge rewards were offered, bands of woodmen scoured the mountains high and low, but, alas, no sign of the girl could be found! The unfortunate father gave up the search and began to prepare himself for the grave. There was nothing now left in life that he cared for—nothing but thoughts of his departed daughter. Honeysuckle was gone for ever.

“Alas!” said he, quoting the lines of a famous poet who had fallen into despair:

“My whiting hair would make an endless rope,
Yet would not measure all my depth of woe.”

Several long years passed by; years of sorrow for the ageing man, pining for his departed daughter. One beautiful October day he was sitting in the very same pavilion where he had so often sat with his darling. His head was bowed forward on his breast, his forehead was lined with grief. A rustling of leaves attracted his attention. He looked up. Standing directly in front of him was Dr. Dog, and lo, riding on his back, clinging to the animal’s shaggy hair, was Honeysuckle, his long-lost daughter; while standing near by were three of the handsomest boys he had ever set eyes upon!

< previousintronext >
Login to Comment
One Response
Hahaha I enjoyed every moment reading this. Thank you. I am confused though, where do the three handsome boys come from...hmm
justmingleza@gmai... · 4 years ago
Go to Library