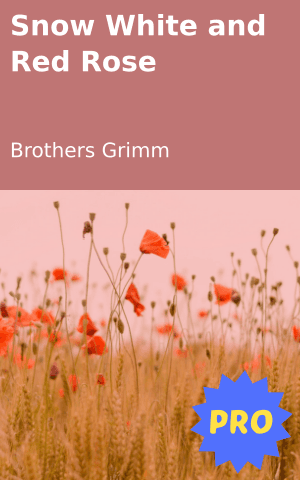 When spring came, and all outside was green, the bear said one morning to Snow-white, “Now I must go away, and not return again the whole summer.”

“Where are you going to, dear bear?” asked Snow-white.

“I must go to the wood and protect my treasure from the wicked dwarfs. In winter, when the earth is frozen hard, they are obliged to remain underground, for they can’t work their way through; but now, when the sun has thawed and warmed the ground, they break through and come up above to spy the land and steal what they can; what once falls into their hands and into their caves is not easily brought back to light.”

Snow-white was quite sad over their friend’s departure, and when she unbarred the door for him, the bear, stepping out, caught a piece of his fur in the door-knocker, and Snow-white thought she caught sight of glittering gold beneath it, but she couldn’t be certain of it, and the bear ran hastily away, and soon disappeared behind the trees.

A short time after this the mother sent the children into the wood to collect fagots. They came in their wanderings upon a big tree which lay felled on the ground, and on the trunk among the long grass they noticed something jumping up and down, but what it was they couldn’t distinguish. When they approached nearer they perceived a dwarf with a wizened face and a beard a yard long. The end of the beard was jammed into a cleft of the tree, and the little man sprang about like a dog on a chain and didn’t seem to know what he was to do. He glared at the girls with his fiery red eyes, and screamed out, “What are you standing there for? Can’t you come and help me?”

“What were you doing, little man?” asked Rose-red.

“You stupid, inquisitive goose!” replied the dwarf. “I wanted to split the tree, in order to get little chips of wood for our kitchen fire; those thick logs that serve to make fires for coarse, greedy people like yourselves quite burn up all the little food we need. I had successfully driven in the wedge, and all was going well, but the cursed wood was so slippery that it suddenly sprang out, and the tree closed up so rapidly that I had no time to take my beautiful white beard out, so here I am stuck fast, and I can’t get away; and you silly, smooth-faced, milk-and-water girls just stand and laugh! Ugh! what wretches you are!”

The children did all in their power, but they couldn’t get the beard out; it was wedged in far too firmly.

“I will run and fetch somebody,” said Rose-red.

“Crazy blockheads!” snapped the dwarf; “what’s the good of calling anyone else? You’re already two too many for me. Does nothing better occur to you than that?”

“Don’t be so impatient,” said Snow-white, “I’ll see you get help,” and taking her scissors out of her pocket she cut off the end of his beard.

As soon as the dwarf felt himself free he seized a bag full of gold which was hidden among the roots of the tree, lifted it up, and muttered aloud: “Curse these rude wretches, cutting off a piece of my splendid beard!” With these words he swung the bag over his back, and disappeared without as much as looking at the children again.

Shortly after this Snow-white and Rose-red went out to get a dish of fish. As they approached the stream they saw something which looked like an enormous grasshopper springing toward the water as if it were going to jump in. They ran forward and recognized their old friend the dwarf.

“Where are you going to?” asked Rose-red; “you’re surely not going to jump into the water?”

“I’m not such a fool,” screamed the dwarf. “Don’t you see that cursed fish is trying to drag me in?”
The little man had been sitting on the bank fishing, when unfortunately the wind had entangled his beard in the line; and when immediately afterward a big fish bit, the feeble little creature had no strength to pull it out; the fish had the upper fin, and dragged the dwarf toward him.

He clung on with all his might to every rush and blade of grass, but it didn’t help him much; he had to follow every movement of the fish, and was in great danger of being drawn into the water. The girls came up just at the right moment, held him firm, and did all they could to disentangle his beard from the line; but in vain, beard and line were in a hopeless muddle. Nothing remained but to produce the scissors and cut the beard, by which a small part of it was sacrificed.

When the dwarf perceived what they were about he yelled to them: “Do you call those manners, you toad-stools! to disfigure a fellow’s face? It wasn’t enough that you shortened my beard before, but you must now need cut off the best bit of it. I can’t appear like this before my own people. I wish you’d been in Jericho first.” Then he fetched a sack of pearls that lay among the rushes, and without saying another word he dragged it away and disappeared behind a stone.

Tell us: What do you think about the dwarfs?