Gus and Gabby, two good, kind gorillas, lived in a special part of the zoo. They had a little house to sleep in, and a wooden jungle gym to play on. They also had three trees to climb.

Gus and Gabby were having lunch. They were eating cabbage and pumpkin and beans and mealies, and lots of oranges and paw-paws and apples and bananas. They loved bananas!

Suddenly a little boy’s head popped up over the wall of Gus and Gabby’s garden.

“Can I come down and play on that jungle gym?” he asked.

“Yes,” said Gus. “Jump down into the garden, but mind the thorn bush!”

So the little boy jumped down and landed on the grass next to the gorillas.

“We have nearly finished eating our lunch, but we still have one banana left,” said Gus. Even though he loved bananas more than any other food, Gus was a very kind gorilla. He held it out to the little boy. 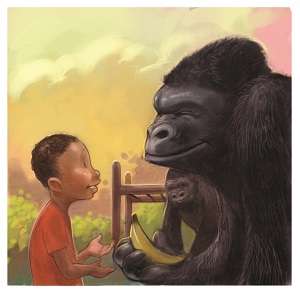 “Yes, please,” said the little boy. He took the banana and smiled.

“Where is your mother?” asked Gus.

“She is lost,” said the little boy.

“That is true,” said Gus. “How did your mother get lost?”

“We were walking along, eating ice-creams, and when I looked up, she wasn’t there,” said the boy.

“I’m sure you’ll find her later on. But let’s play now!” said Gus, and he took the little boy’s hand and lifted him up onto the top of the wooden jungle gym.

“Okay,” said the little boy. He wandered off and fell fast asleep on the clean, sweet-smelling straw bed in Gus and Gabby’s little house.

“If he is lost, maybe he can stay here with us forever,” said Gabby. “I would like that!”

Just then the zookeeper arrived.

“I think I have important news for you,” he said, and he handed Gus a letter. Then he left, and closed the gate behind him.

“It must be important news if it is a letter for Gus!” thought Gabby. “What does the letter say, Gus?” asked Gabby with her big chitty-chatty smile.

Gus climbed up onto the top of the jungle gym and opened the letter. “It’s from Policeman Moloi,” he said.

Gus held the letter out in front of him and read aloud to Gabby:

Molefe is missing. He is five years old. He was walking around the zoo with his mother. They were eating ice-creams. Molefe’s mother said she loved chocolate ice-cream, then she asked Molefe what his favourite ice-cream was. But Molefe didn’t answer because he wasn’t there!

His mom was very worried. She called, and called, “Molefe, Molefe, where are you?” But there was no answer.

Molefe’s mother ran all over the zoo looking for him, but she couldn’t find him. He is missing. Gone! Just like that!

If you get any news about Molefe, beat your chest loudly, and we will come running.

Best wishes to you, Gus.