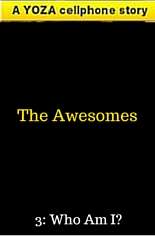 “Hope, chill darling, I know Zack and I can tell you that this is going to be an innocent misunderstanding.”

Deevya flicks her long hair and looks dubious. “You’re probably right Nomusa, and I’d love to be as trusting as you, but personally I always like a bit of proof rather than relying on blind faith,” she says.

With that Deevya snatches the cellphone out of my hand and starts navigating through Zack’s personal info!

She shoots me a look as if to say, ‘so stop me’, and then starts reporting back on her findings.

“I’ve checked his dialled calls and he’s never dialled this number, and this is the first call he’s received from it. The number’s obviously not saved in his phone otherwise Velaphi’s name would have come up on the phone. I’d say there’s no need for you to worry about this one…”

Even though I feel uneasy about Deevya going through Zack’s phone, I feel relieved at what she is telling me.

“And in his drafts folder are more than 20 sms’s that he wrote to you between Valentine’s Day and today, and never sent. She scrolls and reads:’Hope, you are everything to me, I’m so sorry”; “Hope, this is all a big mistake”….

I snatch it back from her. Poor Zack. This is his private info. It’s totally wrong for us to delve into it.

Nomusa looks smug. “I told you, the guy is solid gold. Zack’s the man.”

“And he’s a gonner,” Deevya says happily, “he’s totally Hope-ful. If you two love birds keep carrying on like this you might actually convince even jaded old me to believe in l.u.r.v.e again.” It’s hard to tell by her tone if she’s being serious or if she’s just taking the mickey out of me.

An hour later, after I’ve said goodbye to the girls and walked home, I knock on ‘Zack the man’s’ door to give him back his phone.

“Zack! How hilarious! We accidentally swapped phones!” I say as he opens the door.

But Zack doesn’t seem to be seeing the funny side in this.

“So who is this Zoom who wants to know if you want to go out with him tonight?” he asks, brandishing my phone like its evidence of a crime committed.

“That’s funny,” I retort lightly “because I was going to ask you who this Velaphi is who wants to know if you’re ‘still on for tonight’?”

Zack looks totally blank, as if he has no idea who or what I’m talking about, and then he makes the connection.

“Who?? Oh, Velaphi….she’s that new girl that’s moved into the block. Damn, I totally forgot about that. I helped her family move in this morning. Remember I was carrying all those boxes? She asked me if I wanted to come and have a just-moved-in Kentucky picnic at their flat tonight as thanks for my help.”

So that’s all. Ok. That’s cool-ish. I’ll be keeping an eye on that Velaphi though.

“Well Zack, I’m afraid I haven’t been a very good neighbour because I was a bit surprised, and maybe just a teensy bit jealous when Velaphi phoned, and once I’d figured out that I had your phone I must admit that I just hung up on her!”

Zack looks amused. “Well, that’s not very welcoming,” he grins at me.

“So what did you say to Zoom?” I ask, fixing him with an inquisitive look and lifting one eyebrow.

Zack suddenly looks really embarrassed.  “Well, he didn’t call, he sent an sms. And I only read it because I thought it was my phone,” he says defensively, and then continues with more confidence, “So when I realised what must have happened and that I had your phone, I just replied by sms on your behalf and said: ‘I’m so nt intrsted in u Zoom. Pls dn’t evr bther me agn. I’ve gt bttr thngs 2 do so why dnt u tk a jmp. Hope.”

Zack pokes me in the ribs. “It’s ok. I’m only joking Hope. I never replied. I just spent a couple of hours reading and rereading that sms, working myself up into a state about it.”

Both phones simultaneously beep as an sms arrives.

We swap phones so that we each have our own back. It’s a group message from Nomusa.

“Well my mom’s going to Cape Town on a business trip tomorrow, and she’s staying overnight, so I have the flat to myself for a change. And I was going to ask you if I could cook you dinner.”

I don’t really know if that’s an invitation or not, given the ‘was going to’.

“But she’s out for another couple of hours now, so we’ve got the place to ourselves,” says Zack. “Do you want to come and chill in my room and listen to some music Hope?”

Somehow he manages to move into my space during that sentence so that by the time he’s finished it we’re standing not more than an inch apart.

I’m trying to remember all those good reasons for taking things slow.

“Hope, I loved everything you said today about getting to know yourself, and us needing to get to know each other better too. It means we’ve got to step into the unknown, and that’s such an adventure.”

I’m feeling so torn. Should I stay or should I go?

WHAT DO YOU THINK? Mmhhmm, things are hotting up here. Do you think this counts as that ‘first date’?

< previousintronext >
Login to Comment
115 Responses
OMG
tarry · 3 years ago
Oh My God
Fran · 4 years ago
just say 'yes' for a change, hope. gosh.
boipelo · 4 years ago
Yeah, they must be heading towards dating
Daddy a Diva · 4 years ago
I think he are one confused boy
#ff0fffrayabby#ffffff · 6 years ago
Load More
Go to Library