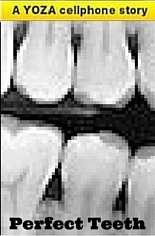 I suppose that, in our own way, we were all collectively strange. The bunch that no one picked for his side at football or hockey – and that was the glue that held us together.

Besides that, it must be admitted that Steven had some really good stuff: sweets that stained your teeth bright red — well, technically, not your teeth, just the plaque, but the result was often the same. It took a few days good brushing to get it off. Well, most of it anyway. He had effervescent tablets that turned the canteen drinking water into that exact same pink mixture that the dentist gives you to rinse your mouth out after scraping around inside, and guaranteed to make us splutter and spit it out when the taste slowly percolated through and met the memory of our last checkup.

Then there was the event that became the rite of passage into our group of misfits and outcasts: making a mould of your teeth.

It was inevitable that one of us, seeing the plaster casts on the shelf by Steven’s bed, would ask how they were done. It was just as inevitable that a few minutes later Steven would be mixing up various powders and liquids, and pouring them into a horseshoe-shaped contraption.

It wasn’t dangerous. At least, I imagined it wasn’t. But it did make us feel vaguely uncomfortable, and appeared sufficiently disturbing that we all in turn volunteered each other to go first until, at last, Andy said he was game. And that’s how it began. But we all had our turn in time.

For me, the hardest part to overcome was the the gagging reflex that set in when I bit down into the acrid blue resin jelly and it flowed out, up and around, over teeth, gums and tongue. That’s when my nose filled with what I imagined were fumes from the warm paste. And I seemed to suddenly be drowning in my own saliva.

Once we’d all done it, we all agreed that things generally got better when Steven reminded you that you could actually breathe and swallow, normally.

Whenever he did this procedure Steven would watch the second hand trotting round the dial of his watch, mouthing the quarters, before poking the setting goo to check its consistency. Then, when he gave the nod, we’d try to prise our jaws apart.

As the seal around gums and teeth was pretty solid, it felt like the goo would never come off, and there would be a lot of giggling at the patient’s expressions and grimaces. Steven would jiggle the handle that stuck out beyond his patient’s front teeth like some metallic duck’s bill, turning and twisting it most professionally and murmuring encouragements. And, then, with an awful sucking slurp, it would come free.

It was the same every time. The first initiate would revel in retelling the gross sensation of having this evil-smelling plastic slug invade his mouth, while the others waited their turn with mixed trepidation and excitement. Raucous laughter greeted the suggestions of the other body parts that could receive the same treatment.

The next part of the proceedings was less thrilling. Steven measured and mixed the plaster of paris, prepared the cast, and then poured the plaster into the mould.

It get even less exciting when he said we’d have to wait an hour while the plaster set real solid. But the next time we visited his room we got to marvel at our toothy grins labelled and lined up on the shelf. We were all perfectly happy with the result, even wanting one as a trophy until Steven passed an expert eye over them, pointing out here a gap, here a filling, and there a completely misaligned incisor. We were, he told us, mediocre specimens for his collection.

It didn’t matter. We were all friends, a group bonded by the common experience of being able to see our teeth on Steven’s shelf.

So when John* joined the school one day in the middle of term, and then came to sit down on the bench overlooking the hockey pitch, we all inspected his teeth in a sort of enlightened-amateur way.

Unlike us — too gawky, ill-coordinated and just too ‘different’ to be chosen for the various teams — John had a medical note excusing him from sports, and thus the indignity of changing into shorts and a T-shirt, to end up doing nothing but sitting and chatting, unneeded, on the sidelines for 45 minutes.

We looked over at him, said ‘Hi’ and then turned to Steven for his professional opinion.

“They look perfect,” he declared. “Dunno what he’s got, but it certainly hasn’t affected his teeth.”

This was the remark that set everything in motion.

We shuffled along, making space and asking him all the usual questions you ask someone who arrives after the start of term: Where are you from? You don’t happen to have any beer caps from there, do you? What team do you support? What’s your favourite group? Have you ever built a crystal set?

Apart from his teeth, John was pretty ordinary. As ordinary as his name in fact. He’d arrived because his parents had to move often for their jobs. As to what they did, they were researchers or something. That was nonetheless a pretty curious job, and sounded different to an accountant, assistant manager, lorry driver, dentist and — I suppose — teacher, which were about all the other jobs we knew offhand, anyway. John didn’t really know what the work entailed. Except moving. They seemed to be doing that all the time, he said.

Overall he was vague about everything. Quiet, slow. A bit not there. His last school? All right. This one? OK. Not doing sport? Doesn’t really bother me. He was made of Teflon. Nothing stuck. Everything just slipped off and around him. Like to come over to Steven’s after school? Sure. Why not?

After a generous tea of buns and biscuits and sticky cakes, served by Steven’s mum along the counter in the kitchen – “You had sport this afternoon, didn’t you? Must be ravenous, poor things?” (If only she knew…) – we set off for Steven’s room.

Once there, seated on and around his bed, we shared Steven’s collection with John as if it was our own, pointing out favourite pieces and particularly gruesome details, and then inviting him to make his contribution to the grinning teeth on the shelf.

We giggled and tapped each other on the shoulders and made vomiting gestures as Steven prepared the bright blue goo — the vivid colour was easier to see if a bit stuck to your gums, he had explained — and trowelled it into the stainless steel horseshoe device.

“Now clamp down tight until I say it’s OK,” he said, manoeuvering it into John’s gaping mouth. “And don’t forget to breathe. Off we go — Bite!”

John showed none of the signs of discomfort or even panic that we had each experienced. He didn’t sweat, or turn bright red. His eyes didn’t bulge. He didn’t forget to breathe or swallow. He just sat with his hands on his lap, the metal prong sticking out of his mouth. And waited.

Steven was busy looking at his watch and so didn’t notice our disappointment. His interest was purely professional.

“Time’s up,” he proclaimed. “I’ll just jiggle this —” He took hold of the prong. “— and you try to open your mouth. It won’t come at first and I’ll have to wiggle it again. Don’t worry, it always works like that…”

Steven gave a gentle tug. The blue plastic came away immediately. So did half of John’s jaw, looking just like the diagrams on the wall.

Our screams brought Steven’s mother running up the stairs.

John’s parents got to Steven’s house so fast they even beat the ambulance Steven’s mother had also called. John’s dad gently pieced John’s jaw and head back together, and then held them fast with both hands. Together, John’s parents helped him into the back of their car. “We’ll take him straight to the hospital ourselves – it will be faster,” said his mother. And then they sped off, leaving us standing horrified in the cloud of dust the racing wheels created.

When we called the hospital later to find out how John was they didn’t know who we were talking about. John and his family had never arrived.

John never came back to school, and we never saw or heard of him again. Well not in the flesh. But we all still see him every night, as nightmares of his perfect teeth haunt our sleep.

< previousintronext >
Login to Comment
90 Responses
???
boipelo · 3 years ago
Horrific climax thou :)
:}*kÂ¤kÂ¡bÂ¤y:}* · 7 years ago
Boring:[
#1996ff(F)*OkaR+mIgUeL(F)* · 7 years ago
A thriller indeed. Makes u wonder if JOHN Is a ghost or just a figment of their imagination. after all, the friends r all pretty weird.
Palesa · 7 years ago
Perfect Thriller from Perfect Teeth. Left an incredible impression!
DopeAF · 7 years ago
Load More
Go to Library