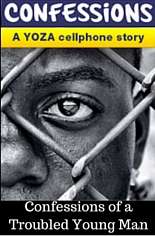 “Stuff.” I can’t tell her that I’m wondering whether I’m gay or not. I can’t tell her about Njabulo. She won’t understand. Nobody understands such things. Hawu, I don’t even understand it myself. It’s just something I feel in my body. For years now, actually. But I tried to reason it out of the way. All guys look at each other. But it doesn’t mean anything. It’s a phase you go through.

Kebone puts her arm around my waist. “I was wondering,” she says softly. “We’ve been seeing each other for some time now. Don’t you think it’s time we … you know … took things a bit further?”

I look into her eyes. I know what she means.

“It’s also about emotions. People must feel something for each other.”

My insides churn over. The uncertainty screams in my head.

WHAT DO YOU THINK: Is Nathi just going through a phase or not?