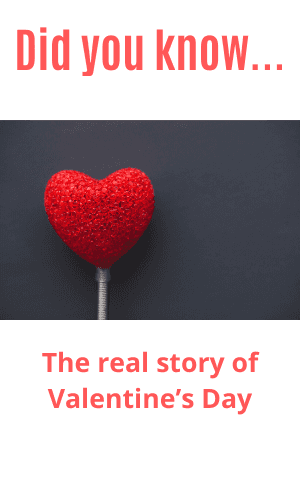 Go to your nearest shop right now and you’re likely to be greeted with heart-shaped balloons, rose-decorated shelves, and mugs that scream ‘Be My Valentine’. Valentine’s Day is a day that some love to hate, others forget, and some look forward to with great anticipation. But how and where did it originate? Well, that depends on who you ask because no one has pinpointed the exact origin of the holiday.

St Valentine is killed for love

Early reports make mention of St Valentine, a priest who lived in 3rd century Rome, Italy. During that time, it was illegal for young soldiers to be married because it was believed that they were better as soldiers than married with families. St Valentine felt this was an injustice. He opened his church doors and allowed single young men to get married in secret. This secret was eventually exposed and St Valentine was put behind bars.

It is believed that Emperor Claudius II tried to convert St Valentine upon his arrest and then sentenced him to death after he refused to pray to the Roman Gods. His execution date was set to be on 14 February, 269 AD. On his last day on earth, he wrote a love letter to a mysterious girl, who was believed to be the daughter of the jailer. The letter was signed ‘from your Valentine’. Ever since, lovers all over the world have written letters and exchanged gifts to each other on the day of St Valentine’s death.

Another version of the story involves the brutal treatment of Christians by the Romans. The Romans subjected their Christian prisoners to beatings and torture. St Valentine could not bear to stand by and let this happen, so he tried to help them escape. However, he was caught and subsequently thrown in jail as well.
What these two versions have in agreement is the love St Valentine had for the jailer’s daughter and the fact that he wrote his final letter to her just before his death.

The Romans pay homage to the martyr, St Valentine

The Romans had a fertility festival called the Feast of Lupercalia, which celebrated the official start of their springtime. The celebrations included sacrifices of goats and the pairing of women with men. The celebrations were on 15 February and there are some claims that this gave us the modern-day Valentine’s Day. At the end of the 5th century, 496 AD, Pope Gelasius I decided to put an end to the Feast of Lupercalia and declared that 14 February would be celebrated as St Valentine’s Day in honour of the saint.

Most countries now celebrate Valentine’s Day and some have even developed their own traditions. Some parts of the world use the day to express love to their families and friends, while most consider it a day for romantic couples.

The day has now become commercial as well, with hotels and shops offering promotions designed with couples in mind. Also, can you even think of a better day to propose to a loved one than on Valentine’s? Imagine celebrating your anniversary on such a romantic and globally acclaimed day.

People may have different versions of where Valentine’s Day originates, but they all seem to agree it is the day that couples, families and friends reserve for appreciating one another.

So, whether you’ll be attending the Men’s Conference (an imaginary conference held for the purpose of escaping and avoiding Valentine’s Day), or spending the day with your loved one, you simply can’t deny the day’s popularity in the 21st century.

Tell us: How do you celebrate Valentine’s Day?

Did you know... what junk status means for you?

Did You Know? The difference between astrology and astronomy
Login to Comment
17 Responses
Its a beautiful story ,I loved it 💖💖
Zuraida12 · 2 weeks ago
I see it as a day of love...where haters must take a break and relax, to stop being in other peoples businesses.....a day of love and romance being shared by partners, lover's, kids, and FAM....
ashra · 3 weeks ago
I really love Valentine's day bcz it's full of love and romance just enjoy the love the boys /girls give u ❤️
Sambugal · a month ago
My birthday is exactly two days before Valentine's day.
michedaniels · 2 months ago
Thats good febuary mounth is full of love and romance
leoniebanor2@gmai... · 2 months ago
Load More
Go to Library