Author
Ben Applegate
Publisher
FunDza Literacy Trust
Language
English
Licence
All Rights Reserved.
Topics
ScienceNon Fiction ArticleDid You Know
Login to Like.
22
Did You Know? our animals are in danger and so are we

Did you know that many animal populations in South Africa are declining rapidly. This is a problem because many of these animals are extremely important to the environment and the economy. Animals such as cheetahs, African penguins, and rhinos are all vulnerable or endangered. If they become extinct they won’t exist at all. Imagine one day telling your children that once upon a time there used to be animals called rhinos and cheetahs that lived in South Africa …

There are many reasons why these animal populations are declining. Cheetahs are killed by poachers and are losing their habitat to agricultural land. Farmers are sometimes forced to kill cheetahs because they attack, kill and eat their livestock. Penguins are dying because of things like pollution and trash in the ocean. Rhinos are killed by poachers for their horns, which are used for traditional medicine amongst other things.

Another animal thats population is rapidly declining and that are vital to our survival as humans, are bees.

Bees are an extremely important insect. They produce honey and beeswax which can generate millions of rands per year. They also help pollinate plants which we need for our survival. Pollination occurs when a bee goes to one plant and some of the pollen sticks to its legs. They then fly to another plant and the pollen rubs off the bee’s legs onto the other plant – fertilizing it. Bees help to pollinate the same fruits and vegetables that we eat every day.

Bees are not only important in South Africa, but also in the entire world. According to the Food and Agriculture Organisation of the United Nations, two thirds of the world’s food crops rely on bees for fertilization. Without fertilization these food crops would die out and so would our food supply.

In recent years bees have been dying at an alarming rate across the entire globe. The main reason bees are dying is because of the use of pesticides on farms. Farmers are using pesticides in order to produce more crops, but it is coming at a cost. Pesticides affect the central nervous system of the bees which eventually kills the bees. Parasites which cause diseases are also another reason bees are dying. Just in 2015 an outbreak of disease killed 40% of bees in the Western Cape.

Bee keepers across South Africa have begun to take steps to combat this problem. They have begun to regulate bee hives more closely, which has helped them to regain control of the bee population.

Most people consider bees to be annoying pests that just go around stinging people, but they actually have a very important purpose in the world.

Albert Einstein once said, “If the bee disappeared off the surface of the globe, then man would only have four years of life left.”

So next time you see a bee and go to wack it out of the air, think about the consequences.

Luckily more and more people are becoming concerned about the future of bees and are doing all they can to protect them, and to spread the word about how important they are. Take this viral tweet for example: 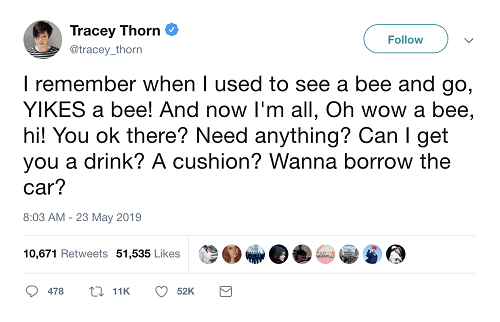 Did You Know? Before the 1980s only electronic enthusiasts used personal computers
Login to Comment
22 Responses
Why kill bees why .I am afraid of all animals and insects but killing them is a hard thing . We have to save the animals from the poachers . Cheetahs ,rhinos and bees need to live their lives fully, I mean who are they to take this animals lives . They are a part of us as South Africans so why take their lives. They are not being fair to those animals. Just imagine if it was them being the animals they wouldn't like it but they still kill. #Poachers stop killing
Warrior Queen · 3 weeks ago
That's bad 😭😭😭
Warrior Queen · 3 weeks ago
We must protect all the animals whether they are endangered species or not .I think more respect and consideration should be given to animals ,they too have lives and feel pain .
Cutie · 2 months ago
People really have to stop rhino poaching
Mcstuffin · 4 months ago
South African we need to care of our animals, we must stop to kill animals,because animals are important to us.
Doris · 9 months ago
Load More
Go to Library