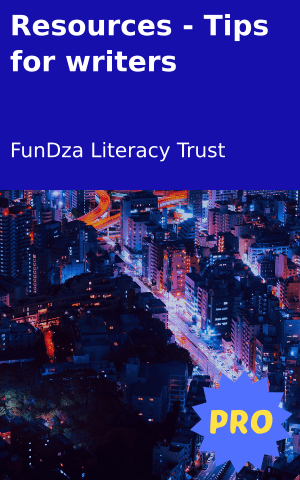 A common instruction for writers is to show rather than tell. Here is an example of what this means:

My mother is often cross with me. She always shouts at me. – The writer is telling us

“Why did you not do all the washing up yesterday?” my mother shouted. “And when are you going to put the tap off properly so it doesn’t drip? You drive me mad!” – Here the writer is showing us the angry mother, so we get a real picture of her.

I got out of bed and I went to eat breakfast. Then I washed myself and went to school.

My cellphone alarm went off and I jumped awake. It was still half dark and cold, but I forced myself up and went through to the kitchen. My brother was already there, stirring the morning porridge. He took one look at me and served me up some and we sat together to eat it. The sweetness and heat of it made the morning feel better. “Thanks bhuti,” I said, and went to splash myself clean. Now I was ready for the day.

This paragraph is much longer, and really gives us a picture of the narrator’s morning. These small details: the cellphone alarm, the weather, the porridge – all help us imagine the scene more clearly in our minds.

An important skill when writing short stories and essays is the rule of “show don’t tell”. But what does that mean?

When you tell rather than show, you simply give the reader information rather than letting them figure it out on their own.

Telling is simply stating information, for example: Xolile is “tall”, “ugly”, “angry”, “cold”, “tired”. When you tell the reader everything they need to know up front it takes the fun out of the reading experience for them. You are stealing the opportunity for a new world to be discovered.

When you show you allow the reader to use their imagination and let them get involved in the scene. You create a connection between what is happening in the scene and who is reading it.

For example, if your character is tall, the reader could know this because other characters keep looking up at him. If your character is angry, show this by describing their facial expressions, their rising voice, their aggressive body movements etc.

Another effective way to show is through dialogue. Dialogue takes a scene that could be passive and makes it active. It adds movement. It makes the scene more engaging for the reader.

Zola walked into the kitchen. Zola’s grandmother asked if he had done his homework. He told her he had even though he hadn’t touched it. His grandmother didn’t believe him but decided to make Zola his lunch anyway.

Zola walked into the kitchen.

“Hello my child, have you done your homework?” asked Makhulu with a stern look on her face.

“Um… yes,” replied Zola sheepishly, with his fingers crossed behind his back.

“Are you sure?” asked Makhulu, holding Zola’s face, inspecting his eyes for any trace of lies.

“Yes, I would never lie to you,” said Zola, becoming more uncomfortable.

“If you ever lied to me it would break my heart,” Makhulu said, tightening her grip.

“I promise granny, I promise,” Zola said, his eyes filling with tears.

After seeing his tears, Makhulu let go of Zola’s face. She wasn’t convinced but proceeded to make a sandwich for his lunch.

< previousintronext >
Login to Comment
12 Responses
These tips are very helpful I should say😇
Gift Austin · 2 days ago
Eh it's gonna be difficult
kaymore98 · 7 days ago
Thanks a lot I used 2 think Writing is easy like ABC buh now eyyy.....
Noclynnoku · a week ago
Writing is easy, but not easy as we others think
MrCJ · 2 weeks ago
Thanks so much. I would improve in my writing.
Nobe · 2 weeks ago
Load More
Go to Library