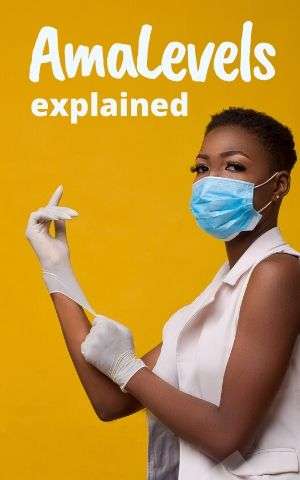 At midnight on Monday 28th December South Africa has moved to an adjusted form of Alert Level 3. A further update of this level was announced on Monday 11th January. Here are the details of what this means.

Sadly, South Africa has had to move quickly from an updated Alert level 1 announced in mid-December to an adjusted version of the previous Alert level 3 which was last in place at the end of June. The plea for people to be really careful during the festive season has been largely ignored and, with South Africa also experiencing a new mutation of the virus, it has become imperative to increase the level of restrictions.

The new mutation of the Covid-19 causing virus known as 501Y.V2 is now responsible for over 90% of our infections. Scientists says that it seems to spread more easily, especially among younger people. It has a more effective binding system and carries a higher viral load which has caused the acceleration of South Africa’s rate of infection in this second wave of the virus. This means that all people, young and old, need to be much more cautious than we have been.

South Africa’s hospitals, especially in the hotspots found in the Eastern Cape, Western Cape and KwaZulu-Natal are dangerously close to reaching capacity, with many private and public hospitals already full. More recently, hospitals in Gauteng have also reached capacity. Oxygen, an important ingredient in helping those struggling to breathe, is also running short in some areas. It is in this context that the harsher restrictions have been introduced. Although maintaining our economy is so important, the likelihood of many people becoming really ill and dying has increased to such an extent that these restrictions are badly needed. We all need to do our very best to abide by them.

President Cyril Ramaphosa was visibly emotional in his speech given on the evening of the 28th December. He said, ‘We have let down our guard and unfortunately we are now paying the price.’ He added that we have not been conscientious about wearing our marks, washing and sanitising our hands, keeping our social distance and avoiding gatherings. How many of us have successfully followed these recommendations properly during this time? The latest statistics seem to show that we have not been careful. Pandemic fatigue combined with the festive season has led us to relax too much and so here we are…

South Africa has recorded more than 1.2 million cases of Covid-19 and there have been 33 000 recorded deaths. These numbers continue to rise rapidly although areas such as the Eastern Cape show signs of stabilising. The number of new cases per day are rising and there were more than 50 000 new cases reported in the 4 days between Christmas Eve! and the 27th December with more than 9000 new cases reported on Sunday, 27th December. This has risen considerably since December as there were 15 046 new cases recorded in the 24 hours preceding Monday the 11th January with 416 deaths during those same 24 hours. Infections continue to increase in Limpopo. We have not yet reached the peak of the second wave of infections in many areas of South Africa. With our hospitals reaching capacity, our doctors and nurses exhausted and the number and severity of infections growing daily, we are indeed in a dangerous moment. There are currently over 15 000 people in hospitals around the country with about a third of them requiring oxygen.

22 more districts have been added to the list of hotspots announced in mid-December. In addition to the Nelson Mandela Bay municipality, and the Sarah Baartman district in the Eastern Cape, Buffalo City, the Chris Hani, Amathole, Alfred Nzo and OR Thambo districts are also hotspots. In the Western Cape, the West Coast, Overberg, Winelands, Central Karoo districts and the City of Cape Town have been added to the Garden Route as hotspots. New provinces with hotspots are Gauteng with the West Rand District, Tshwane, Ekurhuleni and Johannesburg; KwaZulu-Natal with eThekwini and Umgungundlovu, Ugu, Harry Gwala, King Cetshwayo and Llembe districts, Limpopo with the Waterberg and Capricorn districts and the North West with the Bojanala District. Travel to these areas has been discouraged and people have been asked to travel only for essential reasons.

So what does the updated adjusted Alert Level 3 actually mean?

Do I HAVE to wear a mask?
Yes, it is compulsory for everyone to wear a mask over your mouth and nose in all public areas. This includes strolling along the pavement as well as in shops and other indoor and outdoor venues. So many people have been ignoring this simple rule that it is now a criminal offense not to wear one. Up until now it has been the responsibility of shop and building owners, employers and public transport operators to ensure that people wear their mask but now the obligation is on you directly. If you don’t wear one, you may get a fine or even be jailed for up to 6 months.

The only exception is people taking part in vigorous exercise and they need to be socially distanced from any other person.

Can I celebrate New Year’s Eve?
You can but probably not in the way you have in the past. All indoor and outdoor gatherings have been banned for 14 days, except for funerals. All liquor sales have been banned and no alcohol may be consumed in public places. Unfortunately, alcohol has increased reckless behaviour and people forget to socially distance and wear masks. On top of this, the hospitals tend to fill up with trauma cases caused by alcohol and every bed is now need for Covid cases. So celebrate life and love and keep yourself and your family safe by celebrating at home. The president encouraged people to light a candle instead of the usual fireworks to remember those who have died from the pandemic and for those who are risking their lives in the health care services to save others.

Can I buy alcohol?
No. As stated above there has been a complete ban on the sale on alcohol for the reasons specified. Additionally, all bars, nightclubs, shebeens and taverns are closed. The transportation and distribution of alcohol is also prohibited.

How about cigarettes?
Although cigarettes were banned originally under Level 3, you are free to purchase them in the adjusted Alert level 3.

Can I go to a restaurant, cinema or gym?
Yes, these all remain open but they need to close by 8pm. This also includes shops and other cultural venues. No alcohol may be consumed or sold in any venue. Each venue has to restrict the number of people in the venue to either 50 (indoors) or 100 (outdoors) people or 50% of their capacity.

Has the curfew changed?
Yes, the new updated times for the curfew are between 9pm and 5am. No-one may be outside of their homes during this time unless they are essential workers or have a medical emergency.

May I still go to a funeral?
This is the only form of gathering that is still allowed but, as these are seen as super spreader events, only 50 people are allowed at the funeral and no other events either pre or post funeral are allowed. President Ramaphosa continues to plead with people not to attend funerals as these events are costing people who attend their lives.

May I go with my family to the beach?
All beaches, public parks, public swimming pools, dams, lakes and rivers have been closed in hotspot areas. The only beaches that are effectively open at the moment in South Africa are in the Northern Cape. No gatherings are allowed either although you may be with immediate family in areas not on this list. Only parks with restricted access are allowed to be open.

Am I allowed to travel?
There is no ban on interprovincial travel although travel to hotspots is discouraged. Twenty land ports of entry in South Africa have been closed to general traffic. These land ports have been very congested lately as people arrive at the border without the necessary Covid-19 paper work. This means that they have become prime hotspots for the spread of Covid-19. These will be closed until the 15th February for both general entry and departure. People will be allowed to enter or depart the country through these border posts for the transportation of goods, emergency medical attention, diplomatic travel, the return of South African citizens and permanent residents, the departure of foreign nationals, and those that commute daily to attend school in South Africa. International travel at sea and airports remain as it was in Alert Level 1. Moving around from place to place is one of the ways that the virus spreads to different areas so be very careful when you are travelling. Always maintain a safe distance of 1.5 metres from another person and wash your hands with soap or sanitiser for 20 seconds after touching surfaces outside your home.

May I attend a church, mosque or other faith-based venue?
No, all gatherings including those at faith-based venues have been banned for 14 days. The only exception is for a funeral with the appropriate restrictions in place.

Of course, none of us want these new harsher restrictions but we have, in a sense, brought this on ourselves by not following the basic safety protocols properly. Only with public support of these new regulations, can we hope to get to a place free of coronavirus and end the pandemic. Although a vaccine is on the horizon in South Africa, it is not due until around April and even then it will only be available to the minority of at-risk people. We need to keep the death rate down if we want this ‘terrible year’ not to extend in 2021.

President Ramaphosa pleaded with South Africans to play their part in defeating the pandemic. He said, ‘We all have plans, hopes and dreams for 2021. We want it to be better than the year that has passed, and that was filled with such hardship.

“This can become our common reality if we return to the spirit of solidarity that we displayed throughout 2020.”

< previousintronext >
Login to Comment
8 Responses
Let's be safe stay at home and wear your mask.
Gallas · a week ago
One needs to think for his/her life. We can see how the number of deaths increases daily. Let's keep ourselves safe and pray daily 🙏🏼🙏🏼🙏🏼
Kara03 · 2 weeks ago
I wish everyone can comply with the regulations. Let's be safe. Sanitize and wear your mask
Presh88 · 2 weeks ago
We only pray that everyone plays they part...I really don't want schools to be closed
Clichè · 3 weeks ago
Guys let's help end covid 19 coz I have a very hectic year of school coming up and I don't want to be in another lockdown that disturbs my school work😭😭😭😭
Sky walker · 4 weeks ago
Load More
Go to Library